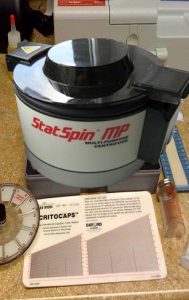 Why Is My Dog Or Cat’s Blood PCV Low Or High?

Your pet’s packed cell volume (PCV) is the amount of space occupied by its red blood cells ( RBCs ) once they have been spun (centrifuged) and “packed” at the bottom of a glass tube. The clear portion above it will be your pet’s plasma.

The PCV is a percent % value: the height of the packed red blood cells in relation to the total height of the blood column in the glass tube. Almost all of the time, the more red cells in your pet’s blood, the higher the PCV number will be. In automatic systems, it is called hematocrit or HCT. That is a calculated value, using the number of red blood cells per volume (RBC/mm3) of blood divided by the average individual size of each cell (MCV). So if either of those two values have machine errors, the PCV will too.

The differences between your pet’s PCV, calculated by the old method, and its HCT, done mathematically in a blood analyzer, are insignificant when the machines are well maintained. But it is wise to ask that an abnormally low analyzer results be confirmed with a spun PCV.

Low PCV means anemia. The signs of low PCV in your dog or cat are pale gums, rapid respiration and a lack of energy. When the PCV is life-threateningly low, those signs can progress to coma, organ failure, hypothermia and death.

If your pet’s PCV falls below 15-20%, a transfusion is in order – if your pet still has the potential to produce future red blood cells of its own.

Reasons Why Your Dog and Cat’s PCV Might Be Low (Anemia):

There are too many to list. But all the causes I gave for low hemoglobin levels or low thrombocyte numbers can cause your pet to have a low PCV as well.

In immature dogs and cats, intestinal hookworms or heavy flea infestations are the most common cause.

Low PCV is a characteristic of Parvovirus infection and panleukopenia infection, which are most common in young dogs and cats respectively. But any infection that causes a young pet to pass bloody diarrhea will have the same effect. Young pets often do not have enough iron stored in their bodies to replace lost blood when it is lost rapidly.

In mature cats, feline leukemia and feline immunodeficiency virus ( feline AIDS )are the most common causes.

Parasites carried by ticks and fleas are also common cause of anemias, those include  ehrlichia in dogs and cats, and  babesia in dogs. Mycoplasma felis (aka Haemobartonella) in cats is another.

In older adult pets, diseases of the immune system and bone marrow that cause blood loss due to loss of clotting ability (thrombocytopenias), destroy red blood cells directly (autoimmune hemolytic anemias) or prevent their formation (aplastic anemias) are a less common but significant cause. Veterinary clinical pathologist help sort those problems out. (These are the self-directed diseases that respond to corticosteroids [see ANA and Coombs tests]).

Cancers of the blood white cells (lymphoma, leukemias) or those that crowd out the red blood cell-forming cells of the pet’s bone marrow can also cause anemia (see M:E ratio).

In elderly dogs and cats, the most common cause of severe anemia is chronic kidney disease.

Mild-to-moderate anemias also occur in diseases that are not primarily diseases of your pet’s blood – such things as FIP in cats, heartworm disease in dogs and many forms of cancer and liver disease.

Overdose or sensitivity to medications given for pain or  arthritis  relief (aspirin, Rimadyl® other NSAIDs) are another common cause of intestinal bleeding leading to low PCVs. Never give aspirin to dogs and cats and most certainly never give Tylenol® (acetaminophen) to cats.

Of course, severe blood-loosing wounds that are the result of car accidents, animals fighting, etc. will also cause low PCV in dogs and cats.

Cats that are persistently anemic with no ready explanation should have a PCR test run on their blood for evidence of hemotropic mycoplasma. (Antech T985 Fast Panel PCR-FHMP or Idexx RealPCR™ ). Not all positive cats are anemic when they have these organisms; so a  Coombs test might also be indicated.

I recently reviewed cases where dogs developed thrombocytopenia and sudden anemia subsequent to receiving leptospirosis-containing vaccines. A condition that appears similar to Evans Syndrome in humans.

Reasons Why Your Pet’s PCV Might Be High (Polycythemia):

An true, abnormally high PCV is quite uncommon. When it does occur it is usually a result of dehydrated – not your pet having more total red blood cells than normal.

That could be from bouts of diarrhea or vomiting, the inability or refusal to drink water. Extended periods of fever and panting will also cause dehydration.

But in very rare instances, changes in your pet’s bone marrow, including marrow cancer, actually cause excess RBC production (primary polycythemia). That can be due to persistent low oxygen content of the pet’s blood, as occurs or when your pet’s circulatory system or lungs are failing or living at high altitudes.

A very rare kidney tumor that secretes the hormone, erythropoietin, has also been implicated in polycythemia and there are suspicions that high cortisone levels (as occur with steroid administration or Cushing’s Disease) might occasionally cause elevated PCVs too.

What would be a normal PCV in most dogs is abnormally low in greyhounds (and possibly other sight hounds as well ?). Whereas a PCV of 37- 55 % would be normal in most dogs, a greyhound’s PCV should run 55-65%.

CBC/WBC and blood chemistry panel  including bilirubin values and thrombocyte counts, Stool exam for parasite eggs and/or evidence of bleeding, urinalysis for the presence of blood, ANA and Coombs tests, blood clotting time (CT) measurement. Further tests your veterinarian will suggest base on the results of his/her initial tests.