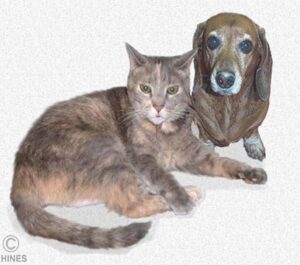 Dealing with Arthritis in Your Dog And Cat 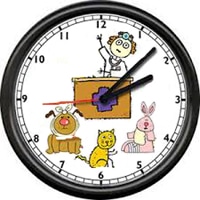 I wrote this article some years ago. You will find more specific and helpful information in the links I have just below. 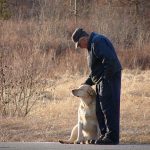 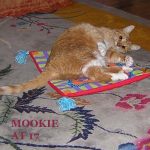 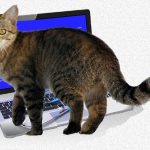 Pain Control In Your Cat 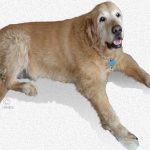 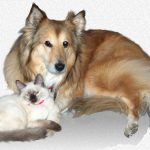 A New Approaches To Pain Control

Arthritis can occur in dogs and in cats and in people in several ways. It can come about due to an injury to a joint, as an inflammatory disease of the bone, due to improper shape or conformation, improper nutrition or just due to the ravages of time. This article focuses on the last cause, joints wearing out due to the passage of time. The advice, however, is useful in dealing with all forms of arthritis in pets.

When you consider how soon mechanical mechanisms wear out, it is really remarkable how long natural joints can function. Nature’s solution to motion is to coat two moving surfaces with a smooth cushiony membrane (synovium), immerse the space between the surfaces in an oily fluid and bind the two together with elastic sheets and ligaments. The secret of the long-term success of this apparatus is that its components are all living and capable of repair. As we age, this repair process becomes less successful and makes errors. With repeated movement throughout the years several things begin to happen. The elastic sheets and ligaments begin to stretch causing looser, more traumatic joint motion. This in turn bruises and erodes the joints smooth surfaces causing inflammation. As these surfaces continue to move, the inflammation causes new bone to be laid down in the way of motion where it does not belong and bone to be reabsorbed from where it is needed. We call the sum of all this arthritis.

The problems that lead to arthritis begin quite early in the pet’s life but are not noticeable at that time. Choosing a breed of pet that has been bred for abnormal bone structure such as bulldogs or Persian cats mean that arthritis will occur sooner than if a more wolf-like or feral cat breed had been picked. Smaller breeds of dogs tend to have fewer problems than the large breeds. It is important that you keep your pets toenails clipped properly so their normal gait is not restricted. Overgrown toenails could be thought of as wearing shoes with improperly shaped soles and heels – they place strain on the joints that support them. A very important caution in preventing or delaying arthritis in later life is not to overfeed puppies – especially puppies of larger breeds. Puppy chows, feed free choice (all they will eat) is not in the long-term interest of your pet. It has been found that if you feed less than the pet is willing to consume it will mature slower with stronger joints and ligaments and even live a longer life. Puppies that eat too much gain weight faster than their poorly calcified joints can support it. They develop loose overly flexible joints, which are a starting point for arthritis. Later in life, it is important that your pet remains trim and not overweight. Trim dogs develop less arthritis and if the do, it occurs later in life. A moderate amount of daily exercise like taking walks with your pets also delays arthritis. Hot tubs, whirlpools and swimming are great.

Let’s say that your pet is already showing the morning stiffness and intermittent lameness that signals arthritis. What are some of the things you can do? First, if your pet is overweight try feeding less of a lower caloric diet. Many are marketed through supermarkets. If you are not strong willed enough to cut the pet’s total food intake, purchase a prescription, weight reduction diet or supplement its diet with low caloric items such as cooked cabbage, green beans and carrots. There are a variety of nutritional supplements on the market today that might improve your pet’s joint function. Some are prepared from extracts of cartilage. Others are formulated from the glycosaminoglycans found in clams. Some have other ingredients added. None have been adequately tested scientifically to prove that they work but none will cause harm to your pet.

Aspirin is one of the oldest non-steroidal anti-inflammatory drugs. Some dog owners still give their dogs aspirin. Unfortunately, few if any dogs tolerate aspirin well . Side effects are often a lack of appetite, vomission, diarrhea or dark (or bloody) stools. If any of these events occur you must lower the dose or discontinue it altogether. Never give aspirin to cats! Aspirin and all other anti-arthritic drugs are often referred to as NSAIDs (non-steroidal anti-inflammatory drugs). All the older ones, such as aspirin, ibuprofen and indomethacin are known for causing stomach problems in people and pets. Three newer ones with less of this side effect and which are approved for pets are carprofen (Rimadyl®, Pfizer) , etodolac (Etogesic®, Wyeth Ft.Dodge) and meloxicam (Metacam®, Boehringer Ingelheim/Merial). The first is a twice a day product, the second two are suggested once a day. All three of these products seem to really help old dogs get about again. They should not be given to cats. When given to dogs in the suggested amount, they are said to be able to improve a dog’s activity level by about 20-30%. However, this is entirely dependent on your dog – its degree of arthritis, its sensitivity to pain, and where in the slow progression of arthritis it currently stands.

The newer, dog approved NSAIDs are lucrative products for their manufacturers. These products come an go. One, tepoxalin (Zubrin®) was eventually withdrawn from the European and North American markets. The reasons were not given. Another, firocoxib (Previcox®) is still available. The last to enter was grapriprant (Galiprant®) Most are now offered in flavored tablets that are easier for you to administer. I do not know of a single scientific study that found any one of these products as being better or safer than another.

A point eventually comes when the drugs I mentioned are not enough. In those pets the carefully supervised use of corticosteroid drugs will often buy extra mobility and time for your pet. Steroids are very powerful drugs. The most commonly used ones for arthritic problems are  prednisone  and prednisolone. They are best given no more frequently than every second or third day. They relieve inflammation throughout the body but these drugs also cause increased appetite and thirst, fluid retention, abnormal liver tests, liver enlargement (hepatomegaly) and other changes. Do not fear corticosteroid drugs too much. Given intermittently and at the lowest effective dose possible, these drugs have a very legitimate place in the treatment of many diseases. They have saved or prolonged many lives. Any person with an organ transplant is likely to remains on one of these medications for the rest of their life. The secret of success with this class of medications is to control your pet’s body weight through diet and exercise and to give as small a dose of these medications and as infrequently as possible so that you and your dog can enjoy each other’s company as long as The Maker allows.

Many veterinarians sell you glucosamine and chondroitin as remedies for your dog or cat’s arthritis. Physicians generally don’t sell medications, but they suggest similar products for their patients as well. But data on the benefits of glucosamine and chondroitin is very soft in pets and people. No well-designed studies ever verified that they were effective in treating arthritis in any species. Despite that, the perceived need to include them in therapy is almost universal. That is because other medication options all bring with them the possibility of major side effects. In studies paid for by the manufacturers themselves, these products showed a slight positive effect. But not enough to account for publication bias. However, when studies were not sponsored by vested interests (the producers themselves) even less or no beneficial effect could be detected. Read one of those independent studies here. As an example, the Harvard Life-time Study of Health Professionals which is one of the most reputable studies conducted in the US, found that these products had zero beneficial effects . Manufacturers now often include other elements and vitamins in their tablets and powders and claim that the beneficial effects of their particular chondroitin and glucosamine depend on those additional agents. However, these claims are not scientifically supported because none of the other additions are known to have beneficial effects on arthritis when given alone or in combination. In 2016, in a double-blind study that gave glucosamine/chondroitin supplements to humans with knee arthritis, the ones receiving the dummy pills (the placebos) actually had less pain and better knee function. Read two of those studies here and here.

I was under the impression that glucosamine sulfate had no potentially deleterious effects on the body of humans or pets. However, an article published in the Lancet was recently brought to my attention that states that glucosamine sulfate is capable of affecting blood glucose concentration as well as the level of circulating insulin. This same article suggested that the compound be used with caution in humans with diabetes. How a product performs in the laboratory and how it performs at home are not the same. So I see no harm in you giving them to your dog or cat in moderate amounts.

Products rich in cold water fish oils such as salmon, and halibut, are high in these essential fatty acids. Omega-3 fatty acids seem to lessen inflammation which is a large component in the progression of arthritis. The safest way to give these products is in capsule form when the ingredients are certified to be mercury-free. The ends of the capsules can be clipped off and the contents dripped on your pet’s food.

There are many other scientifically unproven treatments for arthritis in people and pets. Everything from magnets to acupuncture have been used. I cannot tell you that they do work, but little is lost in trying them if you wish.