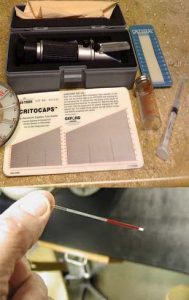 Why Is My Dog Or Cat’s Blood Hematocrit (=Hct=PCV) Low Or High? 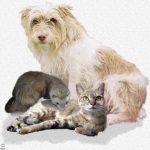 Read this article as well

When your dog or cat’s blood is drawn up into a thin glass tube and then spun in a centrifuge, the height of the column of red cells that have spun to the bottom of the capillary tube is its hematocrit.

Normally, about half of the tube then consists of the pet’s straw-colored blood serum at the top, with packed red blood cells at the bottom and a thin layer of white blood cells just above them (the buffy coat). If the red lower portion is anything less than about 40% of the total, your pet is anemic. The next test, blood hemoglobin content, measures the actual amount of the blood carrying element, hemoglobin, in your pet’s blood. Low hematocrits almost always lead to low hemoglobin levels. The only exception is when the fewer-than-normal red blood cells are larger than normal (a macrocytic anemia or MCV ).

Reasons Why Your Pet Might Have A Low Hematocrit:

There are too many causes of anemia for me to mention. Here are some of the more common ones: Hemorrhage, including, hemorrhage into the intestinal tract (such as due to parvovirus infection in dogs or coccidiosis infection in kittens). Blood sucking parasites such as hookworms in dogs or in cats. Heavy flea infestation,

Other than blood loss through the intestines blood loss from wounds to the body or within the body after trauma is another common cause of a low PCV .

Blood parasites (such as haemobartonella/mycoplasmosis in cats. Babesiosis , ehrlichia and anaplasmosis in dogs can be responsible for a low hematocrit.

Autoimmune anemias, where red blood cells are destroyed by antibodies generated by the pet’s own body is another fairly common cause of anemia in dogs.

Rupture of a major blood vessel, toxic bone marrow suppression, atypical responses to antibiotics and other medicines and bone marrow tumors can also be responsible for a  low hematocrit.

In older dogs and cats, chronic kidney disease is a common cause of anemia. In those cases toxins that build up supress the formation of new red blood cells. That is called an aplastic anemia and a low reticulocyte count helps identify it. Chronic liver disease, malnutrition and vitamin/mineral deficiencies (B12 , Iron, folate) can be responsible for a low hematocrit as well. Those deficiencies are often associated with the chronic intestinal inflammation present in diseases such as IBD ( in your cator in your dog). triad disease in cats and the intestinal form of lymphoma in cats also commonly lead to anemia.

Heavy tick and flea infestation can also be the cause of a low hematocrit and anemia. But anemia in parasitized pets is more likely to be caused by the blood parasites those ticks and fleas carry – compounded by the general stress that animals living in sub-standard conditions endure.

Reasons Why Your Dog And Cat Might Have A High Hematocrit:

Persistent fever is another possible cause of dehydration.

Diuretic medications such as furosemide (Lasix®) can cause dehydration as well.

On very rare occasions, your pet could actually be producing too many red blood cells (polycythemia). That rare condition can occur when kidney tumors produce erythropoietin (a stimulant to RBC production) or due to causes still unknown.

It is normal for greyhound dogs (and perhaps other sight hounds (ref) to have high hematocrits. Polycythemia can also be a response to living at high altitudes or chronic lung disease – both of which limit your pet’s ability to absorb oxygen.