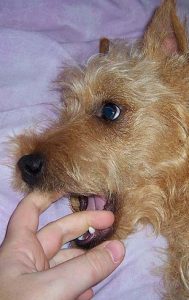 Why Is My Dog Or Cat’s Capillary Refill Time Prolonged? CRT

This simple but very informative test  is one your veterinarian often performs on your dog and cat during an office visit. It is an examination of the pink portions of your pet’s gums.

The first thing your veterinarian looks for is color. Dogs and cats that are anemic have pale gums. Those that are receiving too little oxygen are “muddy” greyish in color. That observation is usually followed by a finger pressed firmly against the pet’s gum surface. When the pressure is released, the pink color will spring back (return). How long it takes to return is your pet/s capillary refill time (CRT). It should be less than two seconds (preferably less than 1.5 seconds).

How fast the gum capillaries (tiny blood vessels) of your dog and cat refill after that finger pressure is removed depends on how well blood is circulating in your pet’s body. It is a crude but useful test – best used only to confirm your veterinarian’s general impressions as to the seriousness of your pet’s health issue.

The longer the CRT (time), the more worrisome the problem generally is.

During that initial assessment, your pet’s heart rate/pulse and rhythm, heard through a stethoscope and felt in the pet’s groin is often the veterinarian’s next observation. Heart issues are a common cause of prolonged CRT time.

All three tests help gauge the adequacy of your dog and cat’s blood flow (circulation,peripheral perfusion). All pets with extended CRT times are not delivering sufficient oxygen to their tissues (=tissue hypoxia).

Why Your Dog And Cat’s Capillary Refill Time Might Be Increased : (Take longer)

Besides heart issues, long CRT times are often due to a decrease in your pet’s blood volume. The two most common causes for that are dehydration and shock (hypovolemic shock).

Although not associated with prolonged CRT, chronic mild dehydration is most common in cats that are consuming dry cat foods and insufficient water. The signs of chronic dehydration, as in humans, can be nebulous (vague) and only significant over time. (ref1, ref2 , ref3)  Dehydration severe enough to affect CRT time can accompany any disease in which apathy or reduced mobility affect water consumption.)

Dehydration can also be due to things like heat stroke, prolonged fever, inability to drink fluids or excessive fluid loss resulting from diarrhea and/or vomiting.

Hypovolemic shock has many causes. Some are toxic, some are infectious, some allergic (eg anaphylaxis). Some are traumatic as in a car accident and blood loss.

In all of them, your pet’s pulse will also be weak, its respiration  will be rapid and its heart rate will be increased. When dehydration is the cause, the gums of your pet tend to be dry and their skin, when pulled upward, is slow to spring back to normal.

Another common cause of increased CRT times are problems related to the heart. Those pets also have a weak pulse and a fast heart rate. It could be the slowly-progressive congestive heart failure of older pets, or sudden cardiomyopathy that occurs in midlife pets. In all forms of heart disease, the problem is the pet’s loss of its ability to maintain blood flow (decreased peripheral perfusion). Another common cause in dogs are the presence of large numbers of mature heartworms.

Medication overdoses can also cause an abnormal slow heart rhythm (bradycardia) leading to an increased CRT. Some drugs that have that ability to do that are beta blockers like atenolol (Tenormin®) and propranolol (Inderal®), calcium channel blockers like diltiazem (Cardizem®), digoxin (Lanoxin®, Cardoxin® ), pimobendan (Vetmedin®), various narcotics as well as insecticide poisoning (of the organophosphate type)