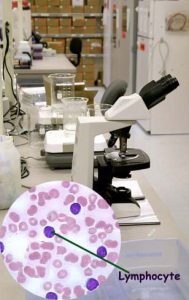 Why Is My Dog Or Cat’s Blood Lymphocyte Count High Or Low?

Lymphocytes are one of the most interesting cells in your pet’s body. That is because of their complex origins, multiple abilities and the intricate things they are constantly doing to keep your pet healthy. When results come back from your pet’s CBC/WBC count and blood chemistry panel, the number of lymphocytes in your dog or cat ‘s blood will be given as the total number per volume of blood (the absolute count) as well as the percentage of the total white blood cell count that lymphocytes comprise. Although there are three major types of lymphocytes (all with very different functions) , the automated blood analyzers of today generally lump them all together. If a sizable portion of the lymphocytes are “atypical” in shape or the count is unusual in number, these machines can “flag” them for human verification using the older, microscopic methods (then you should see something similar to  “verified by smear” written as a side note). In those cases, the staining characteristic of individual lymphocytes are generally added as a note at the bottom of your pet’s lab report.

Most cells of the body are translucent. To visualize their attributes better, the older techniques treat the cells with a variety of stains (dyes) to bring out their fine details and characteristics.

Reasons Why Your Dog and Cat’s Lymphocyte Numbers (Count) Might Be High (Lymphocytosis):

Excitement fear and sudden stress are probably the most common causes of minor increases in your pet’s lymphocyte count.

Discontinuing long-term corticosteroid medications can cause a temporary increase in the dog or cat’s lymphocyte numbers.

Lymphocyte counts are often a bit higher in puppies, kittens and adolescent pets.

[Lymphoma/lymphosarcoma or lymphocytic leukemia cancers can make total lymphocytes counts go both up or down.]

What If It Is Noted That Some Lymphocytes Are “Atypical” or “Reactive”?

The presence of these larger-than-normal lymphocytes in increased number (often with unusual stain colorations) indicates that your pet’s immune system is allerted and responding to some perceived threat. It doesn’t tell your veterinarian what that “something” is. It could be an infection (such as ehrlichia in dogs), it could be a recent vaccination or even a tumor.

Reasons Why Your Pet’s Lymphocyte Numbers Might Be Low (Lymphopenia):

Low lymphocyte numbers occur most commonly after pets receive corticosteroid medications or when their adrenal glands produce too much cortisol (Cushing’s disease).

Less reliably low numbers (lymphopenia) occurs early in parvovirus and distemper infection  in dogs and in panleukopenia in cats or after prolonged periods of stress.

Medications given to fight cancer (chlorambucil, cyclophosphamide, etc.) will also lower your pet’s lymphocyte numbers as will radiation therapy.

Some of my clients have been concerned that their elderly pet’s lymphocyte counts, when reported back from the lab, are somewhat low. I do not know of any studies in cats or dogs, but decreased lymphocyte counts are a normal result of the aging process in us humans. (ref)

They would be based on the rest of your dog or cat’s WBC count and  blood chemistry values, suggestions from the testing lab’s clinical pathologist, your dog or cat’s age, your veterinarians experience in dealing with other symptoms your pet is experiencing, its life history and environment.