Why Is My Dog Or Cat’s Blood Bilirubin Level High Or Low? 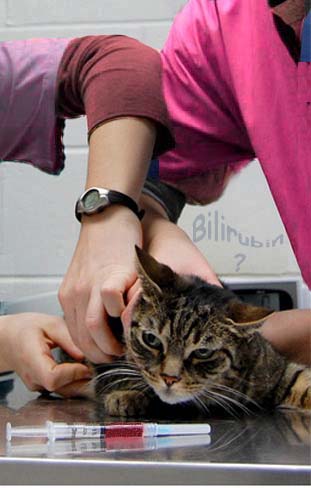 Why Is My Dog Or Cat’s Blood Bilirubin Level High Or Low?

The Bilirubin Level In Your Dog Or Cat’s Blood

Bilirubin is a yellowish orange pigment that is composed of the residue (heme from the hemoglobin in your dog or cat ‘s blood) of your pet’s destroyed red blood cells. That is a quite normal process – red blood cells in dogs only live about 3 months and only about 2 months in your cat.

It is the job of certain cells in your dog or cat ’s liver to concentrate, process and excrete this heme residue into your pet’s bile. Much of it eventually leaves the dog or cat ‘s body in its feces. Insubstantial amounts (a little) leaves healthy dogs through their urine – none in healthy cats.

Bilirubin is responsible for the reddish brown color of old bruises and the yellow skin of jaundiced pets. It is most noticeable in the whites of your pet’s eyes, the inside skin of its ears and its gums.

Your dog or cat ’s lab work will report the value as Total Bilirubin (TB). It may also report what portion of the bilirubin has already been processed by the pet’s liver (Direct = post-hepatic or conjugated bilirubin) and what portion has not yet done so (Indirect = pre-hepatic or unconjugated bilirubin). Those two later values give vets hints as to whether too much heme is being produced (ie too many destroyed red blood cells ) or if the liver is unable to process the normal quantities of discarded heme that all pets produce.

In some cases, the liver is working well in its duties, but there is blockage of one sort or another in the gallbladder and duct system that conveys bilirubin from the pet’s liver to its upper intestine. Most sick dogs and cats have elevations in both types of bilirubin. But how much of one versus the other sometimes gives a hint to what the cause might be. One of the most dramatic spikes in bilirubin occur when the pet’s bile drainage duct system becomes blocked (as with a gallstone(s)).

Once a liver/bile duct crisis or blood crisis passes, it can take a long time (one to several weeks) for your pet’s blood bilirubin values to return to normal.

Health Problems That Can Cause Your Pet’s Bilirubin Values To Be High (hyperbilirubinemia):

Chronic liver disease is the most common cause of high bilirubin levels in dogs and cats. That can be from a wide variety of liver diseases.

In cats,  cholangiohepatitis (triad disease) is a common cause. One should also consider hepatic lipidosis when the cat’s blood alkaline phosphatase (AP) level is significantly above normal as well, particularly in cats that refuse to eat.

Cancers (eg lymphosarcoma) associated with the feline leukemia virus, the debility of feline AIDS or cats that have developed FIP can all suffer from high bilirubin levels as well.

The liver is a vast blood sieve that can trap tumorous cells that have broken free from cancers in all parts of your pet’s body. Those secondary (metastatic) tumors in the liver of elderly cats and dogs can lead to elevated blood bilirubin levels as they grow in mass and begin to prevent normal liver function.

As I mentioned earlier, any obstructions to the flow of bile (such as gall stones, biliary obstructions or chronic biliary [gallbladder] inflammation ) can also raise blood bilirubin levels in pets.

Exposure to chemicals that are toxic to the liver is another potential cause of high blood bilirubin levels in your pet. That is particularly true of Tylenol™ (acetaminophen) if given to cats. (ref) I have also seen high bilirubin when dogs consumed dog kibble that contained moldy corn (aflatoxin).

Health Problems That Can Cause Your Pet’s Bilirubin Values To Be Low (hypobilirubinemia):

I know of none.

It is not that unusual for a pet that appears healthy to occasionally have moderately higher than normal ALT, bilirubin or Alkaline Phosphatate levels with no apparent explanation. Physicians face the same problem as veterinarians when deciding what to do in those situations. (ref) I generally suggest that the test be repeated in 2 weeks to see if the results are still abnormal. Many times, they have improved. I am also more concerned when a number of liver-related tests are a bit high than when only one is. Of course, if your pet is feeling poorly, has lost weight or the result was quite high, waiting is not a good idea.