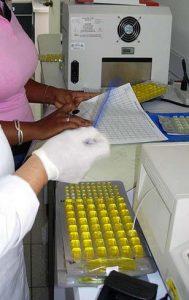 Why Is My Dog or Cat’s Anion Gap Reading High Or Low?

This test is an indicator of your pet’s acid:base balance, its blood pH and its bicarbonate buffer reserves. It is critical that the acidity (pH) of your dog or cat ’s body be kept within a tight range by the continual presence of carbonate (=bicarbonate=HCO3-) in its blood and the pet’s kidney’s ability to discharge excess chloride in urine while conserving bicarbonate.

When your pet’s AG number is abnormal, it is usually because it is a higher number than it should be. A high AG value means your pet suffers from metabolic acidosis – a condition in which the levels of acid in its body are increased (ie blood pH is too low). That is usually because your pet is deficient in bicarbonate – either because it was consumed (used up) or was lost from the body. So the treatment for a high anion gap is generally intravenous sodium bicarbonate (aka baking soda).

Health Problems That Can Cause Increased Anion Gap (Acidosis) In Your Pet:

The most common cause in mature and elderly dogs and cats is chronic kidney disease. I mentioned that your dog or cat‘s kidneys are the chief organs responsible for keeping its blood pH in a narrow safe range. So not surprisingly, damaged kidneys or any sort of obstruction to urine flow will raise your pet’s anion gap. Sudden kidney failure (such as in antifreeze poisoning and other causes of acute kidney injury such as occasionally occurs with leptospirosis infection and other infections that can have the same effect.

Probably the next most common causes are urinary tract blockage, as often occur in FUS in cats, oxalate (read dogs here & cats here) or struvite stones blocking the urinary system or due to spinal cord damage (neurogenic bladder).

All of the health problems that negatively affect blood flow and oxygenation throughout your pet’s body can elevate the pet’s anion gap.
One of them is the circulatory collapse that accompanies septic shock. The sluggish blood flow that occurs in pets in heart failure (hypoxia) can do the same.

Very large burdens (numbers) of heartworms in dogs with caval syndrome that obstruct the flow of blood are another cause of hypoxia. Blood clots that occur in cats and dogs with cardiomyopathy are others.

Health problems that cause muscle rigidity or damage muscle fibers can lead to a high anion gap. Those can be related heat stroke (hyperthermia) seizures or extreme exertion when muscle becomes deficient in oxygen (muscle hypoxia, lactic acidosis, aka exertional rhabdomyolysis).

Another cause of an increased anion gap is poisoning with ethylene glycol antifreeze. That occurs both because of the effects of that chemical on the pet’s body and the severe damage it does to the pet’s kidneys.

Salicylate medications (e.g. aspirin, oil of wintergreen, etc.) can cause an increase in  anion gap through their effects on the kidneys as can overuse of urinary acidifiers.

A deficiency in aldosterone, as occurs in Addison’s disease can also cause a mild increased in anion gap.

Dogs with babesia infections occasionally have an increased anion gap. I do not know why.

Conditions That Can Causes A Lower Than Normal Anion Gap:

The most common cause is a low blood albumin level. Quite rarely, a tumor of the pet’s immune cells (multiple myeloma) in which large amounts of globulin protein are released into the pet’s blood stream can have the same effect.