Why Is My Dog Or Cat’s Pulse And Heart Rate Faster Or Slower Than It Should Be? 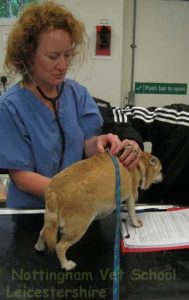 Why Is My Dog Or Cat’s Pulse And Heart Rate Faster Or Slower Than It Should Be?

Your dog and cat’s pulse rate is dependent upon the rate and strength with which its heart is beating. The special muscle (cardiac muscle) that makes up your pet’s heart doesn’t contract or beat the way ordinary muscle does. Instead, a system of nerves extend through the walls of its four heart chambers firing timed electrical impulses that originate from a group of specialized cells in in the upper right corner of your pet’s heart (the sino-atrial or SA node).

A second node, the atrioventricular node (AV node) conveys the electrical impulse to the two, more muscular, lower heart chambers ( the ventricles ). The time during which you pet’s heart is contracting is called systole. The time it is relaxed is called diastole.

Your cat and dog’s SA node receives messenger chemicals and nerve impulses that govern the rate at which its heart beats; but its heart will continue to beat (irregularly) without those impulses. Those impulses come via the autonomic nervous system that is the nervous pathway that conveys signal and messages that we are not consciously aware of. The autonomic nervous system consists of two pathways like a super highway, one conveys sympathetic impulses which increase heart rate and the other parasympathetic impulses which decrease heart rate. Both come by way of your pet’s vagus nerve .

Reasons Your Cat Or Dog’s Heart Might Be Beating Faster Than Normal (=Tachycardia):

Whenever the sympathetic nerves that connect your pet’s heart to its spinal cord predominate in activity over the vagus nerve, the pet’s heart beat and cardiac function increase. The chemical that is released to cause this change in the SA node’s firing rate is norepinephrine (noradrenaline). Calcium plays an important role in this process as well.

All causes of sympathetic nerve stimulation will increase your dog and cat’s heart rate. That stimulation could be excitement. It could be fear. It could be apprehension or it could simply be physical activity and exercise. The more strenuous the exercise the faster your pet’s heart rate and pulse are likely to be. Your cat and dog’s heart rate will also increase when its body is starved for oxygen due to a failing heart or lungs, a circulatory system obstruction or anemia. It will also increase when exhaustion depletes your pet’s muscle glycogen stores.

Dehydration can also increases your cat and dog’s heart rate due to a lack of sufficient blood volume to keep its body well oxygenated.

It is normal for sympathetic nerve stimulation to slightly increases heart and pulse rate during inspiration and to decreases it slightly during expiration. that is due to changes in vagal nerve tone (activity). Veterinarians call that “normal sinus arrhythmia”.

Medications can increase your pet’s heart rate too. Drugs that have that effect include antihistamines such as (chlorphenamineAllerest®), caffeine and decongestant medications that contain compounds like phenylephrine, phenylpropanolamine or pseudoephedrine (Sudafed™). Chocolate toxicity in dogs increases their heart and pulse rate as well.

Atropine eye drops, given in excess, can cause your dog or cat’s heart rate and pulse to go up or down. Anti-nausea and motion sickness medications that contain scopolamine (=hyoscine) can have the same double either-or effect. Theophylline, given to ease difficult respiration, can also increases your pet’s heart rate.

Reasons Your Dog Or Cat’s Heart Might Be Beating Slower Than Normal (= Bradycardia):

As I mentioned, parasympathetic nerve stimulation – primarily coming from your dog or cat ’s brain through its vagus nerve – decreases your dog and cat’s heart and pulse rate.

The messenger chemical that is released that does that is acetylcholine . It shifts potassium out of the heart muscle cells that form the SA node . That decreases the rate at which the cells that form the node send their beat impulses to the rest of the heart. These parasympathetic effects predominate in your dog or cat when it is emotionally tranquil, resting or sleeping.

Tranquilizers such as acepromazine or midazolam (Versed®) in dogs or diazepam in cats will also slow pulse and heart rate.

Other medications can slow your pet’s heart rate too (eg ACE inhibitors your vet might dispense for heart or kidney disease such as enalapril (Enacard®) or benazepril (Lowtensin®) ,  or ARBs  such as telmisartan (Semintra®, Micardis®).  Other heart medications such as digoxin and clonadine can have that effect as well.

EKG, chest x-ray, cardiac ultrasound, CBC/WBC and blood chemistry values  , with further tests chosen by your veterinarian depending on those initial test results, his/her physical examination of your pet and the history you furnish.