Why Is My Dog Or Cat’s Eosinophil Count High Or Low? 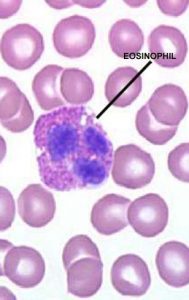 Why Is My Dog Or Cat’s Eosinophil Count High Or Low?

Eosinophils are slightly larger than the much more common neutrophils found in your dog and cat’s blood (of course, we have them in our blood as well). When eosinophils stained with eosin dye, it imparts on the large distinctive  granules in their cytoplasm a distinctive pink color – hence their name. Eosinophils are manufactured by stem cells that reside in your pet’s bone marrow. After they leave the marrow, eosinophils only stay in your pet’s blood for a short time before spreading out into the tissues of its body. They tend to dwell on surfaces that come in contact with the environment – the lungs, intestinal lining (mucosal surfaces) and beneath the skin (ref1, ref2) , places where pathogens are likely to enter the body.

When eosinophils are activated by an encounter with a perceived foreign threat, they degranulate releasing a number of compounds (cytokines and chemokines) designed to kill invading organisms. They are particularly sensitive to the presence of parasites. But when they make an error in judgement of what is friend and what is foe, they are major participants in allergies.

Eosinophils also have the ability to “eat” or engulf (phagocytize) foreign particles that ought not be in the blood or tissue.

Like all cells that participate in inflammation, eosinophil numbers decreased when corticosteroid medications are given.

Reasons Your Dog And Cat’s Eosinophil Count Might Be High (eosinophilia):

Mast cell tumors and a few other types of tumors occasionally increase the number of  circulating eosinophils.

Pets that are allergic to fleas often have elevated eosinophil counts.

Poorly understood hypereosinophilic syndromes such as eosinophilic granuloma  in cats cause large numbers of eosinophils to migrate to affected areas. A few of those cats have higher than normal blood eosinophil counts as well.

In Addison’s disease , a health issue where your pet’s natural corticosteroid, cortisol, level is low, some cases show increased numbers of eosinophils and lymphocytes.

Cats with the respiratory symptoms of asthma , allergic pneumonitis or lungworms sometimes have elevated eosinophil levels (17-46% of asthmatic cats have higher than normal eosinophil counts). (ref)

According to an article in  Clinician’s Brief by Dr. Glenn Olah of the Winn Feline Foundation, the top causes of elevated eosinophil counts in cats are: Internal or external parasites, feline allergic dermatitis, feline asthma, and eosinophilic gastrointestinal disease. Other rarer causes discussed were hypereosinophilic syndrome, neoplasia (cancer) and paraneoplastic syndrome (pre-cancerous states).

Reasons Your Pet’s Eosinophil Count Might Be Low (eosinopenia) :

Since it is not that uncommon not to find any eosinophils in a blood sample from a health dog or cat; having none reported as being found in your pet’s lab report is not cause for concern. But as I mentioned earlier, all corticosteroid medications lower eosinophil numbers. Low eosinophil reports could be false – due to such medications if your pet is taking them.  Prolonged stress causes natural cortisol levels to increase in dogs and cat. That, like corticosteroid medications, can also mask diseases that would have normally increased your pet’s eosinophil count.

Examinations for allergies or parasites that might be the underlying cause of the increased eosinophil numbers. (blood sample based allergy testing is worthless in pets, but skin tests can be helpful)