Why Is My Dog or Cat’s Blood Thrombocyte/Platelet Count Low or High? 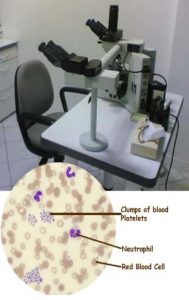 Why Is My Dog or Cat’s Blood Thrombocyte/Platelet Count Low or High?

Platelets and Thrombocytes are the same thing.

Your Dog And Cat’s Blood Platelet/Thrombocyte Count aka PLT, “Thrombos” (The Estimated Number or Actual Count)

Thrombocyte are also called blood platelets. The first word denotes their ability to cause blood clots (thrombi). Their second is based on their plate-like shape. They circulate in large numbers in your dog or cat’s blood, where they are essential to the normal blood clotting process. Thrombocytes are the only cells in your pet’s blood stream that lack a nucleus. They are no more than cytoplasm fragments of the megakaryocytes that dwell in your pet’s bone marrow and periodically release them.

You veterinarian might order an estimate of your pet’s thrombocyte number if he/she is suspicious that you dog or cat is bleeding excessively due to a faulty clotting mechanism. Perhaps, you and your veterinarian are faced with unexplained anemia in your dog or cat. Or perhaps your pet bled excessively after a surgical procedure or developed an unexplained nose bleed (epistaxis) or passed blood in its stool or in its urine. (ref) A thrombocyte count is included in most standard CBC/WBC veterinary reports.

Because the clotting of blood is such a complex process (the  coagulation cascade) with many different stages and the interplay of many chemicals, mediators and cells; a series of tests is often required to determine exactly what is wrong when unexpected bleeding occurs. Those other tests are prothrombin time (PT), partial thromboplastin time (aPTT), fibrinogen level, the D-dimer test , thrombin clot time TCT and, perhaps, some liver function tests (ALT, bile acids).

Along with another blood ingredients (fibrinogen/fibrin), thrombocytes seal the leaks that naturally occur in your pet’s smallest blood vessels (capillaries) and those that occur in larger blood vessels due to trauma.

Since platelets only live a week or so, they are continually produced by the stem cells (megakaryocytes) that I mentioned earlier. If problems occur that interrupt that process or if a rogue antibody is produced that destroy them, it will not be long before your pet’s blood will cease to clot normally. A similar lack of functional platelets occurs in certain forms of shock in which platelets form clumps while still in the cat or dog’ s blood stream (DIC). The primary sign of a platelet deficiency of either type is bleeding that will not stop.

The laboratories that veterinarians depend on to determine the number of platelets in your pet’s blood often determine their number in two different ways and often check one method using the other when the results are unexpected. They can estimate your pet’s platelet numbers by examining a stained glass slide (“smear”) under the microscope. The smear is prepared from a drop of your pet’s blood. They just note on your dog or cat’s lab report that the number was “adequate” “increased” or “low” . Because the thrombocytes of cats “clump” (stick together) quite easily, these estimates tend to be less accurate in felines.The platelets can also be counted in the same manner as your pet’s white blood cells when a complete blood cell count (CBC/WBC) is performed.  Similar to this laboratory report 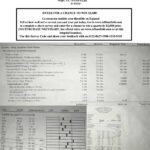 Laboratories do this either with an automated cell counter or (perhaps in less developed locations) manually using older etched glass grids (hemocytometer/unopette systems). When the automated systems give unusual results, it is best to confirm them with the older methods. (occasionally, larger than normal blood platelets or clumping will throw off the automated analyzers’ accuracy). Bleeding that occurs when platelet counts are too low can occur just about anywhere in or on your pet’s body. It can be an unexplained bruise (ecchymosis), pinpoint blood spots (petechia) on the gums, deep within the eye and affecting vision (retinal hemorrhage), tarry rust-colored stools (melena) or rectal bleeding (hematochezia) . Sometimes your pet’s urine is noticed to be pinkish in color (hematuria) or hemorrhage surrounding the heart (hemopericardium), lungs (hemothorax) or in the abdomen causes labored breathing and distress.

Reasons Why Your Dog or Cat’s Platelet Count Might Be Low = thrombocytopenia:

Platelet counts are often low in advanced kidney failure in dogs and in cats.

Medications such as Trimethoprim/sulfa antibiotic or albendazole wormer can all decrease thrombocyte numbers as can certain  anticancer drugs such as cyclophosphamide.

Ehrlichia, babesia and anaplasmosis infection, passed to dogs by ticks, can cause low thrombocyte counts. ( ref )

Tumors that occur in your pet’s bone marrow can crowd out the megakaryocytes that give rise to thrombocytes (these are generally leukemias).

Automated platelets counts can falsely appear low when platelets clump. That is usually due to too slow a blood flow into the collection needle or failure to mix the tube well just after it was collected. But clumping can also be a sign of infection or autoimmune disease.

Greyhounds (and possibly other sight hounds ) tend to naturally have low platelet/thrombocyte counts (80-200 vs 150-400 thousand/mm3 in other breeds).

I have reviewed several cases where dogs developed thrombocytopenia and sudden anemia subsequent to receiving   leptospirosis-containing vaccines . A situation that appears similar to Evans Syndrome in humans.

Platelet/thrombocyte counts are often a little higher than the lab’s normal reference values when your dog or cat is immature.

Ironically the same cancers (lymphoma and leukemias) that cause thrombocyte numbers to decrease will occasionally cause them to increase. Veterinarians cannot tell you why, other than that bone marrow dynamics are very complex. Bone marrow tumors begin as precancerous (dysplastic states). Even in those early precancerous stages, your dog or cat’s thrombocyte numbers in circulation can increase or decrease above normal. (read here & here)

Thrombocyte numbers are sometimes elevated in inflammations and infections of the digestive tract or its accessory organs, the pancreas and liver (IBD, Triad Disease,  Pancreatitis). (read here)

Platelet/thrombocyte counts are occasionally elevated due to the high cortisol levels associated with Cushing’s disease . Oral and injectable corticosteroid medication can produce the same effect.

So can any form of stress, trauma ,heavy exercise or excitement that causes your pet’s blood epinephrine/adrenaline  and/or cortisol levels to increase. Recent surgery as well as removal of the spleen have also caused thrombocyte numbers to increase.

Hypothyroidism in dogs has occasionally been associated with elevated thrombocyte numbers.

Very rarely, the bone marrow megakaryocytes that give rise to your dog and cat’s thrombocytes will themselves become cancerous , multiply and overproduce thrombocytes, or the whole marrow system will go into “neoplastic overdrive” (polycythemia vera).

In humans anemia, usually associated with an iron deficiency, has also be the cause of high thrombocyte numbers. We do not know if that occurs in our pets as well. (read here)

When blood samples are hemolyzed , some automated counting machines can mistake fragments of erythrocytes ( RBCs ) for platelets and give falsely high platelet counts. (read here)