Why Is My Dog Or Cat’s Blood Electrolyte Balance Abnormal? 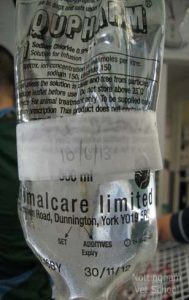 Why Is My Dog Or Cat’s Blood Electrolyte Balance Abnormal?

The Electrolytes In You Pet’s Blood

Many of the causes for electrolyte disturbances are the same as the causes of an abnormal anion gap. Read about those here.

Follow their name links to understand what problems make each one go up or down and the symptoms an imbalance of each is likely to produce in your pet.

The proper balance of electrolytes in your dog or cat ’s blood is regulated by its kidneys; under the control of antidiuretic hormone (vasopressin = ADH, AVP) which is released by its pituitary gland.  Aldosterone , produced by its adrenal glands, and parathyroid hormone (PTH) produced by the parathyroid glands in the pet’s neck also regulate electrolyte balance.

The Signs Of An Electrolyte Disturbances In Your Dog Or Cats Can Include:

Changes in your pet’s breathing patterns

Changes in its heart rate.

Without Treatment, Symptoms Tend To Steadily Become Worse And Can Result In Medical Emergencies.

Along with providing supplemental oxygen, one of the first things veterinarians at emergency centers check and correct are electrolyte imbalances. They do that by providing customized intravenous fluids designed to raise or lower specific blood electrolyte ion levels.

Some Common Causes Of Electrolyte Imbalance In Dogs And Cats That Come To Mind Are:

Higher than normal fluid loss through the urine, such as seen in diabetes or the overuse of diuretics such as furosemide (Lasix®)

Chronic intestinal disease, such as IBD or triaditis that limit electrolyte element absorption from food

Failure to eat a diet that is nutritionally balanced in its mineral content.

Overuse of phosphate binding agents (and phosphate-containing enemas) can also cause electrolyte disturbances.