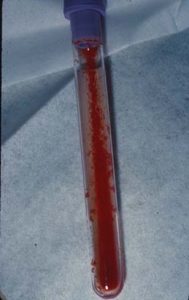 Why Is My Dog Or Cat Coombs Test Positive?

Veterinarians usually run this test on your pet when they are looking for an unexplained cause of anemia, inexplicable skin sores or inflammation surrounding the mouth, eyes and anus. They have already run a PCV and a hemoglobin analysis and they know that your pet does not have enough red blood cells. Perhaps they were informed by the lab that reticulocytes were present in your pet’s blood as well or perhaps the lab added a note that “autoagglutination” or RBC “clumping” was seen. Since they found no intestinal parasites, like hookworms, blood parasites or evidence of other diseases in their office exams, they want to eliminate the possibility that your pet’s immune system is destroying its own red blood cells. That is evidence that the Coombs test tries to provide. When the Coombs test is positive, it has detected destructive antibody (IgG) your pet has produced against its own red blood cells (erythrocytes).

Health Problems That Can Cause Your Dog Or Cat To Become Coombs Positive:

What Does A Negative Coombs Test Mean?

A negative test suggests that autoimmunity is not the cause of your dog or cat’s anemia. But it does not guarantee it because 10-30% of dogs with autoimmune causes for their anemia still show up negative on this test – at least in the early stages of their disease. We know considerably less about cats.

You are on the Vetspace animal health websitea