Why Is My Cat or Dog’s Reticulocyte Count Low Or High? 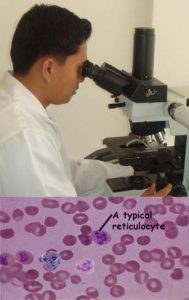 Why Is My Cat or Dog’s Reticulocyte Count Low Or High?

Reticulocytes retain a bit of lacy material that was once part of the protein-making factories (ribosomes) present in the bone marrow cell (hemopoietic stem cells) from which they originated. After a few days in your dog or cat’s circulation, that material disappears and reticulocyte becomes an ordinary adult red blood cell. Although not exactly describing the same thing, increased reticulocyte numbers and polychromasia generally go hand in hand (occur together).

When your veterinarian considers the importance of your pet’s reticulocyte count, he/she must do so knowing your pet’s packed cell volume (PCV, Hct). That shouldn’t be a problem because a reticulocyte count is usually a standard part of a dog or cat’s CBC / WBC test panel that your veterinarian ordered to be run on the blood sample that was taken from your cat or dog.

Because the blood of anemic pets is more dilute, there will be less reticulocytes per volume of blood than in non-anemic animals. That would falsely lower your pet’s reticulocyte count. To get around that, a reticulocyte index (RI) value can be obtained to adjust for any anemia that might be present.

Reasons Why Your Dog Or Cat ’s Reticulocyte Count Might Be High (= Reticulocytosis) :

The usual cause is lack of enough working red blood cells = anemia.

When your cat or dog becomes anemia for any reason, its entire body – including its kidneys are starved for oxygen. That low oxygen situation causes healthy kidneys to produce a hormone called erythropoietin. Erythropoetin encourages your pet’s bone marrow to increase its production of new red blood cells. In the process, there will be more of these younger reticulocyte stage RBCs released into your pet’s blood stream than would normally be found there.

So anemia from any cause should cause an increase in your pet’s reticulocyte count. Rather than list all of those causes of anemia again, find them listed for the reason your pet’ PCV or hemoglobin might be low. In kittens and puppies, heavy flea infestation and hookworms are common causes.

Intravascular (within the blood vessels) red blood cell destruction (hemolysis) can also increase your pet’s reticulocyte count. When an event like that occurs, it is usually due to an autoimmune diseases in which the pet’s own antibodies are mistakenly directed against its own red blood cells. Onion ingestion can cause this as well (as can a mismatched blood transfusion).

There are mixed feelings as to whether cats that eat bentonite-containing cat litter are predisposed (more susceptible) to anemia with an associated elevation in their reticulocyte counts. Only a few poorly-verified instances of that have occurred have been reported.

What If My Cat Or Dog Has A High Reticulocyte Count But Is Not Anemic?

An elevated (high) reticulocyte count can persist for a while after a pet has overcome a period of anemia – say after having bled severely due to a car accident. Higher than normal reticulocyte counts in the absence of anemia have also been found to occur more frequently in dogs taking NSAID  medications like carprofen (Rimadyl®) or meloxicam (Metacam®) to treat their arthritis or other chronic pain conditions. Veterinarians suspect that chronic stomach and/or intestinal bleeding caused by NSAID medications is the underlying cause – but any cause of chronic bleeding – seen or unseen – or extreme exertion can have a similar effect. (ref1, ref2)

Reasons Why Your Dog Or Cat ’s Reticulocyte Count Might Be Low:

Blood loss over extended periods of time, such as intestinal bleeding from parasites or a tumor, can deplete your pet’s iron reserves. That eventually turn a high reticulocyte count, responsive anemia (an anemia “trying to repair itself”) into a low-reticulocyte count unresponsive anemia. That is because your pet’s bone marrow can eventually runs out of the iron needed for new red blood cell formation. That is why giving an appropriate amount of an iron supplement (hematinic) is a wise decision after severe bleeding has occurred. The same problem can occur in chronic intestinal inflammations such as IBD when folate and vitamin B12 as well as iron are depleted.

Similar non-regenerative anemias with low reticulocyte counts often occur due to cytokine chemicals released in the advanced stages of large number of chronic inflammations and cancers. Pets chronically ill or at the end of life from many causes are often moderately anemic. Many of these cases have nothing directly to do with your pet’s red blood cell generating process.

I have found over the years that pets in this situation seem to know that their life is ending. They are calm, loving and not fearful. I believe that the loving thing to do for them at that stage is to spoil them with love and affection and offer them whatever they might be willing to consume in the way of fluids and nutrition – not some foreign-tasting prescription product they are unaccustomed to. I believe that “heroic” veterinary interventions at that point in life is not in your pet’s best interest. So I suggest you not get talked into them by aggressive or corporate veterinary practices.

Low reticulocyte count anemias are a big problem in advancing feline leukemia (FLV). It can also occur in panleukopenia virus infections and it has been associated with ehrlichia infections.

A non regenerative, low reticulocyte anemia, can also occur when pets have consumed lead or zinc-containing objects. Methimazole, used to treat hyperthyroid cats, has also caused aplastic, low reticulocyte count anemias in humans. It is unclear if that is a possible side effect in cats. Various medications given to dogs and cats for the treatment of cancer because of their tumor-cell-destroying properties can damage the pet’s blood forming bone marrow cells as well. That is why the CBC/WBC counts of pets receiving those chemotherapy medications need to be frequently monitored.

When reticulocyte counts are high or low, other tests chosen by your veterinarian to determine why and where blood loss is occurring or what bone marrow issue is causing your dog or cat to have difficulty producing reticulocytes.