Why Is My Cat or Dog’s PLI (Pancreatic Lipase Immunoreactivity) High? 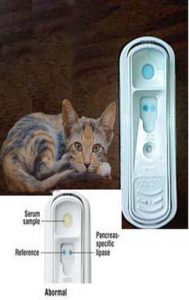 Why Is My  Cat Or Dog’s PLI (Pancreatic Lipase Immunoreactivity) Level High?

This is not your pet’s total blood lipase level

Your veterinarian will probably suggest this test (or the TLI test discussed farther along) if the symptoms history and blood work results found during your pet’s veterinary hospital visit are suggestive of pancreatitis.

I mentioned in my DxMe articles that discuss blood total lipase level and blood amylase level that although those two tests used to be the common ways to diagnose pancreatitis, veterinarians knew that neither were very accurate.

Both those older tests missed many cases of pancreatitis or falsely suggested pancreatitis when no pancreatic problems really existed. In short they were both inaccurate and non-specific. Sometimes the results were elevated when the pancreas was inflamed; but sometimes the pancreas was inflamed and the tests were normal. In still other cases, blood lipase and/or amylase were elevated do to a health issue, but the problem was somewhere other than the pancreas (eg the intestine, liver, gall bladder or kidneys).

Those obstacles led to the development of the pancreatic lipase immunoreactivity test (PLI) and trypsin-like immunoreactivity  (TLI) tests. Both seem to be more accurate in diagnosing pancreatic inflammation (acute or sudden pancreatitis) than previous blood amylase and lipase levels were.

Whether one or the other of these newer tests is better than the other is a matter of debate. The exact names of the tests are confusing because each commercial laboratory tries to brand them with a distinctive copyrighted™ name and, of course, suggest that their’s is better than the ones offered by their competitors. In the United States, Antech Laboratories and Idexx compete for business much the way Ford and Chevy do.

The patented cPL test , designed for dogs and the fPL test, designed for cats appear to have much better track record in zeroing in on pancreatic problems when they are the source of excess lipase in your dog or cat’s blood. These tests ares often run in an attempt to explain the cause of a sudden bout of vomiting, depression and abdominal pain in your dog or cat.

These tests are thought to be perhaps 75% accurate in predicting ongoing pancreatic problems. A 2012 study emphasizes that false-positive and false-negative PLI test results still occur (ref)

What if My Dog Or Cat’s PLI levels Are Only Mildly Elevated?

Have your pet’s cPL or fPL test repeated in 2-3 weeks if your pet’s general condition has not improved. Some pets without pancreatitis seem to naturally have PLI levels moderately above the accepted normal range.

What If My Cat or Dog’s PLI Levels Are Markedly Elevated?

If your pet is a cat, and its test result is high, it may well have pancreatitis. Read about pancreatitis  in cats here   and in dogs here . Pancreatitis in cats is often part of a wider digestive tract inflammatory syndrome (triad disease) and liver. So be sure that IBD, cholangiohepatitis and diabetes are all ruled out as compounding health problems in your pet. These multi-organ problems seem less likely to occur in dogs.

CBC/WBC and blood chemistry panel , urinalysis, fecal examination, x-rays and ultrasound (diagnostic imaging), pancreatic biopsy if other tests were inconclusive and the risk of the procedure is not too great in your pet’s current condition, vitamin B12 and folate blood levels