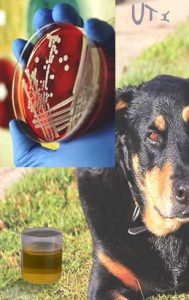 Why Are There Bacteria In My Dog Or Cat’s Urine?

Bacteria In Your Pet’s Urine = bacteriuria

Urine, when collected directly from your dog or cat’s bladder, should be free of bacteria. Two ways of obtaining uncontaminated urine samples are by catheterizing the pet or by passing a needle through the tummy wall and into the bladder (cystocentesis). Urine collected by a “clean catch” will always have a few contaminating bacteria picked up from the surrounding skin. That urine is fine for all lab tests except bacterial culture required to identify the organism responsible for your pet’s UTI and to choose the best antibiotic(s) to treat it. It is quite common for veterinarians and physicians to forgo that test unless and until their initial choice in antibiotics was unsuccessful.

When bacteria are seen on microscopic examination of your dog or cat ‘s urine, they are often reported as “few”, “moderate” or “many” and their general characteristics are described. When they are grown in the laboratory from a sample of your pet’s urine, they are usually reported as the identified species of bacteria combined with a list of the antibiotics most effective in controlling or destroying them (bacterial culture and sensitivity).

Urine collected from a natural urination usually grows bacteria. The significance of those bacteria depends on the symptoms your dog or cat is experiencing, the number of bacteria present, their species and the presence of other abnormal urine tests that suggest an infection (WBCs, nitrite,blood).

Today, very few veterinarians attempt to isolate and identify bacteria from your pet’s urine sample at their hospitals. They send those samples to national laboratories that fly them to their regional facilities. That necessitates a variable time delay. During that delay, many things can change. Urine pH increase significantly if the urine is not sufficiently chilled, and the number and species of bacteria the central lab finds can be affected as well. (ref)

So, occasionally, infections are missed or falsely reported as positive. That is why pets showing typical UTI signs – particularly when other urine tests indicate a possible infection – generally go on antibiotics regardless of culture results.

Conditions That Can Cause Bacteria To Be Present In Your Pet’s Urine:

Female pets, particularly those that are neutered when immature and are overweight, are more prone to simple urinary tract infections (simple UTIs) .

Cats suffering from FUS only occasionally have bacteria in their urine; but those bacteria are not the root cause of their problem.

Bladder and kidney stones commonly predispose dogs and cats (oxalate or struvite) (ref1, ref2) to repeated urinary tract infections. Only removal of those stones and taking steps to prevent their reoccurrence is a long-term solution.

Discontinuing antibiotic treatment too soon, inappropriate antibiotics or those given at too low a dose also predispose pets to repeat infections.

Dogs and cats that have had their spinal cords injured in accidents (neurogenic bladder) or Manx cats that are too severely tailless are very susceptible to urinary tract infections.

Spaying female dogs at too young an age also predisposes them to vaginitis and urinary tract infections. (ref)