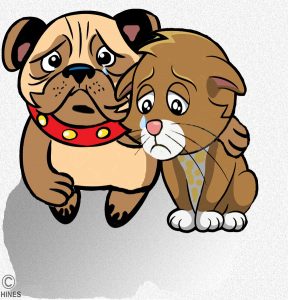 Back to when to spay when to neuter

I mention in several of my articles that the sex hormones, estrogen and testosterone, have many functions in your pet’s body other than fertility. One of those important functions at puberty is to mold the shape of the final portion of your pet’s urinary/reproductive tract (the labia, vulva, and vagina). During that molding process, the anatomy is changed from its infantile, poorly-developed form into its normal mature shape. When those hormones of sexual maturity are removed too soon, some dogs and cats are left with an abnormally small, indented and underdeveloped organ. This article applies to females; but male dogs and cats are not exempt from a similar fate. Even an article designed to promote early-age neutering backfired, in that male pups neutered at 7 weeks rather than 7 months of age had shorter, less developed penises and neither of the groups ever develop their normal distal urinary structures to the extent of sexually intact males. (  press release  )

Not all cases of vulvar invagination are related to the age at which your pet was spayed. Some cases have a genetic basis and are seen in un-neutered as well as neutered females. Cases are also more common in the “wrinkly skinned” breeds and those with flabby skin tone.  But I see it most often in female pets that were unfortunate enough to be spayed before nearing their first heat cycle. The earlier in a puppy’s life that the surgery was performed, the starker this defect generally appears. It also appears to me that later in life, incontinence is more frequent in those early-spayed female dogs as well. But I know of no one who published studies or statistics on either problem. Its just my personal observations made over many years.

Not all of the estrogens that mature your pet’s genitourinary tract originate from its now-missing ovaries. Some is produced in its adrenal glands which are still present and elsewhere. ( read here ) Perhaps that spares some early-neuter female dogs the majority of these side effects. 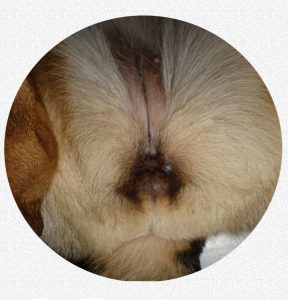 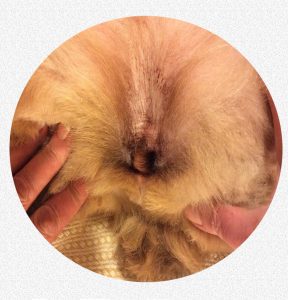 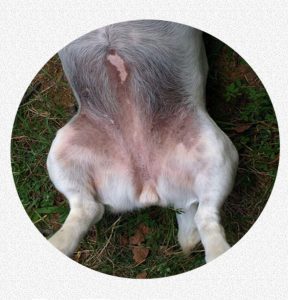 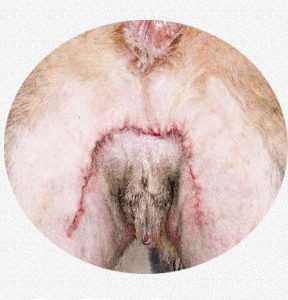 Look at the top two photographs just above. Both show the vulvar problems this article pertains to. The third photo shows what a normally-conformed adult female dog should look like – whether it was spayed or not. In the case of an unspayed female, its genitalia will be larger if the dog is approaching or experiencing a heat cycle. The last photograph is the result of the complex surgery necessary to restore proper conformation (vulvoplasty or episioplasty) to a dog similar to the ones in the first two photos.  My photo of this surgery to correct the problem does not indicate it’s seriousness or complexity – for that go to Google images.

When an adult pet is left with an invaginated, immature genitourinary tract orifice, urine does not drain properly during urination. The area remains damp, urine scald occurs, the dog licks the area traumatizing it and bacterial and fungal infection thrive. Dark acne-like spots often begin to surround it. Elements in the pet’s saliva stain the surrounding hair brown.

The surface of your dog’s skin has a natural population of bacteria – all animal and human skin does. These bacteria are kept in check by the outer defensive layers of our skin.

But when the skin surrounding the vagina is traumatized, due to persistent dampness, urine scald and licking; bacteria that can be quite unhealthy tend to predominate in the area (eg staphylococcus=”staph“, pseudomonas, corynebacteria) ( read here ) Those pets often develop symptoms that mimic a UTI(licking, frequent attempts to urinate, scooting, incontinence, odor, attractiveness to male dogs).

So about that time, many owners of female dogs take their pet to their veterinarian. They are told their pet has a UTI. That diagnosis is technically correct; but it did not occur out of the blue. It occurred because of the unhealthy shape of the final portion of your dog’s genitourinary system. You might be one of those pet owners who left with an antibiotic and were told to give it for a week or two and to be sure their pet drinks plenty of water. If the urine stream was cultured, it yielded bacteria or bacteria were seen microscopically.  But often those bacteria had not really moved higher up the urinary tract – yet. They were just contaminants in your pet’s urine stream when it was collected. Research and simple observation confirm that urinary tract infections are considerably more common in spayed female dogs than those have not been spayed. For example, in a group of 100 dogs brought to the N.C. State Veterinary Teaching Hospital for UTI infections, 65 of the female dogs were spayed and only 7 not spayed. (read here) Obesity in non-neutered female dogs can cause vaginal conformation problems as well.

This is not the common vaginitis of puppies that resolves itself with time. It is not directly the UTIs that are common in female dogs that have struvite bladder or kidney stones (although early-age spaying probably does predispose dogs to struvite stones as well). It is not the UTIs that sometimes develop due to diabetes (although the obesity that commonly follows early-age neutering also fosters diabetes. ( read here & here ) Cushing’s disease can also lead to UTIs and vaginitis. Development of Cushing’s disease in dogs might also have early-age neutering as a factor in its development too.

Oral and injectable antibiotics do give your pet temporary relief. But nothing short of surgery or perhaps hormone therapy. (see here

) , might permanently cure the problems associated with vulvar Invagination. However the use of estrogen hormone therapies like Incurin® are not without serious risk. (read here)

When your pet receives multiple courses of antibiotics for any chronic infection, the chances are high that those bacteria will eventually develop resistance to the antibiotics being used. Such is the case with the staph that are commonly involved in skin and vaginal inflammation. (read here & here) Those resistant bacteria are not just a threat to your dog; they are a threat to you and the other human members of your family as well. Whatever bacteria your dog and other family members harbor are probably already living in and on you as well and vice versa.  (  read here  &  here  ) There is absolutely nothing wrong with that when your pets are healthy.

So besides doing nothing in solving the pet over-population problem, politically correct early-age spays and castrations can lead to a variety of cruel lifelong medical issues for your pet – and possibly for you. (read here, here & here )

Spread the word. I want your pets and you to stay healthy.