Why Are My Dog Or Cat’s Blood CO2 Levels High Or Low? 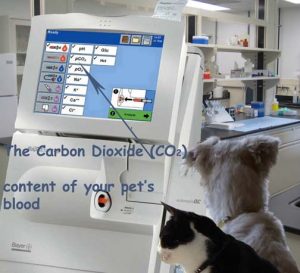 Why Are My Dog Or Cat’s Blood CO2 Levels High Or Low?

The Amount of Carbon dioxide in your pet’s body can be measured a number of ways. Here are some : Carbon dioxide test, pCO2, Total CO2, CO2 tests. This article explains some of the common causes for high or low results for all of them.

A proper acid-to-base body ratio is critical to your pet’s well being. Your veterinarian often monitors it in emergency or critical health situations and during anesthesia because even small variations can have life-threatening consequences. Carbon dioxide (CO2) in your pet’s blood and tissues play an important part in this process.

Other blood tests that examine the acid-base balance in your pet’s body are blood bicarbonate level,    blood pH and  the anion gap .

Carbon dioxide, or CO2, is a gas that is naturally generated in your dog or cat ’s body as a byproduct of metabolism. As it is continuously produced, carbon dioxide is carried through your pet’s blood stream to its lungs were it is exhaled and discharged in the same way that fresh oxygen from the air is absorbed. CO2 moves through your pet’s blood stream primarily as bicarbonate (HCO3) ions; less than 10% exists as dissolved, free CO2 – the kind that rises to the top of a freshly opened carbonated beverage. How all these factors work together to preserve the right liquid environment within your pet’s body is quite complex (Henderson–Hasselbalch equation)

When the amount of dissolved free CO2 in arterial blood is measured with a blood gas analyzer (a machine similar to the one at the top of this page), the value is actual pCO2

Whenever blood carbon dioxide levels become too high (hypercapnia) , your pet’s body uses several strategies to bring the level back down to normal. The same thing happens in your body – when you sleep in a position where your respiration is restricted, you will turn your head without ever waking up.  When that is insufficient, respiratory centers in the brain (RC centers) and near the heart (carotid bodies  & aortic body) that sense CO2 level will speed up respiratory and heart rates to bring those CO2 values down. The same process occurs in dogs and cats (ref)

It would be quite unusual for your veterinarian to order just a CO2 or bicarbonate assay for your pet in a non-emergency situation. When the test is run, it is almost always run as part of a blood electrolyte or metabolic panel, because knowing that there has been a change in your pet’s body acidity would not tell your vet how to proceed without some other relevant blood values to help explain why the problem occurred. In those situations, the information is gathered in other ways than a direct pCO2 value and is only an estimate of the total CO2 level.

What Signs Might I See If My Dog Or Cat’s CO2 Level Was High?

The most important and quickest signs to develop will be those that relate to the pet’s brain.
Respiratory centers in the dog or cat’s brain will immediately increase its breathing rate (respiratory rate) and the force of each breath (labored breathing=dyspnea) in an attempt to rid its body of carbon dioxide. If that is not sufficient, confusion, apprehension and disorientation begin to occur. Pets that have too much carbon dioxide in their system almost always have too little oxygen in their body as well. Both situations will contribute to the same signs that you see. In these situations, pets usually pant. Panting can also be an effort to lower body temperature in dogs or a reaction to pain and apprehension  – but in cats, it is much more likely to be a response to low body oxygen and higher than normal CO2. Read about abnormal breathing in dogs and cats here.

Dogs and Cats that have persistent high CO2/low oxygen levels are often suffering from sluggish blood circulation that is the result of heart or lung problems. The gums and mouth of those pets is often slightly bluish  (cyanotic).

Since the bicarbonate in your pet’s circulatory system buffers against the harmful effects of CO2, your pet’s bicarbonate level has a major effect on how any change in its total CO2 level will affect it.

Hopefully, faster respiration will bring the situation under control. In an additional effort to rid its body of excess carbon dioxide, the pet’s heart rate and pulse rate should increases as well. When that can not compensate adequately or when medications prevent it, the rising acidity of the dog or cat’s  brain environment will eventually lead to collapse and coma.

Specific Medical Problems That Can Cause Your Pet’s Blood CO2 Level To Be High (aka Hypercapnia):

When a jump in carbon dioxide (CO2) level occurs in a pet suddenly, it is often because the animal is in shock. Shock is basically an inability to supply the dog or cat’s body’s cells with oxygen (poor perfusion) that has resulted from its inability to pump blood throughout its body (circulatory collapse). Blood pressure in pets in shock drops; making it harder for them to rid their bodies of excess carbon dioxide. The shock could be due to a severe allergic reaction (anaphylactic shock), blood loss from a dog or cat fight, a traffic accident, a severe infection, or an electrical shock.

Head trauma that sometimes occurs when pets are hit by cars can affects their ability to breath and expel CO2 due to brain swelling and injury to their brain respiratory centers.

Interferences With Your Pet’s Lung Function

Anything that prevents a pet from breathing properly will quickly lead to a high CO2/low oxygen situation. That could be aspiration of milk by a young puppy or kitten or the aspiration pneumonia that can follow it. It could be a severe case of tracheal collapse as sometimes occurs in toy breeds or the collapsed noses of certain brachycephalic breeds. (ref)    Brachycephalic dog breeds, such as pekes and French bulldogs, are prone to higher CO2 and lower oxygen saturation because of those restricted airways. They also get into respiratory trouble earlier due to hot weather, exertion or general anesthesia.

It could be laryngeal paralysis that occurs when nerves to the neck and throat are injured.  It can also be due to fluid flooding the lungs (pulmonary edema) that occasionally follows an anaphylactic reaction or heart failure.

A similar situation occurs when air enters the space around a dog or cat’s lungs (pneumothorax). With air in the chest, the pet’s lungs collapse and can not function adequately. Lungs also cease to function properly in situations where tears are present in the diaphragm (diaphragmatic hernia) or when muscle disease (myopathies) involves the diaphragm. (read here)

On rare occasion collars or ropes around the neck become so tight as to prevent normal breathing. Even rarer are Elizabethan collars that keep carbon dioxide-rich exhaled air against the pet’s mouth and nose.

Many narcotic medications, given in high doses, interfere with the centers that control breathing. When doses of that size are given (perhaps during surgery as part of a general anesthetic plan or for pain relief after surgery or for long-term pain control) the pets need continuous monitoring and observation be be sure they are breathing adequately to meet their oxygen requirements and their need to expel CO2. That is why a pulse oximeter is often placed on pets in those situations. Most of the narcotic medications that affect breathing are opioids (eg butorphanol, buprenorphine, codeine, fentanyl, naloxone, tramadol etc.). Some are also used by veterinarians to control cough.

Pets that are very dehydrated do not have the volume of blood that they should (hypovolemic). Dehydration that severe can be caused by inability to consume water, over-administration of diuretics (like Lasix®), or the fluid lost in severe diarrhea or vomiting. When diarrhea or vomiting is the cause of dehydration, it is often in a very young pet because of their higher metabolic rate, large surface area in relation to their body weight and higher susceptibility to the infectious causes of stomach/intestinal problems (gastroenteritis).

High Blood CO2 Levels Can Be The Result Of General Anesthesia

During the general anesthesia required for surgery, your pet’s normal mechanisms to rid its body of carbon dioxide and increase its intake of oxygen are blocked. To prevent the veterinary staff’s exposure to the gases used in anesthesia, the entire gas breathing system is a closed loop. A CO2 absorber in the system should remove the carbon dioxide from that system. Should the pet be too “deep” under the anesthetic or should the CO2 absorber fail, the pet’s CO2 level can rise to dangerous levels. In human medicine, blood CO2 levels during anesthesia are continuously monitored. In veterinary medicine, it is often only blood oxygen levels that are continuously monitored.  A bit of hypercapnia (a moderate increase in blood CO2 levels) during anesthesia is not always a bad thing. It can increase the pet’s breathing rate to insure that sufficient oxygen reaches its tissues. (read here)

What Signs Might I See If My Dog Or Cat’s Blood CO2 Levels Were Low?

You would probably not see any. However, the pet’s normal reaction would be to breath more slowly to bring those levels up. If the situation persisted, the pet’s body would become more basic (less acidic, higher pH = alkalosis). In those rare situations, blood calcium and potassium levels could drop, leading to cramps and tremors.

Reasons Why Your Pet’s Blood CO2 Level Could Be Low (Hypocapnia):

Anything that produces hyperventilation (rapid or unusually deep breathing) in a dog or cat that has a normal circulatory system and normal lung function will lower its blood carbon dioxide level (“CO2 washout”).  This raises the pH of your pet’s body (respiratory alkalosis). Human swimmers do the same thing to stay under water a long time (a foolish thing to do because you can pass out under water due to lack of sufficient brain oxygen).

Any time your dog is engaged in strenuous exercise, it will breathe faster and lower its blood carbon dioxide level – particularly on hot days. That has been studied and confirmed in field trial hunting dogs. (read here)

Complete blood chemistry panel including electrolytes,  diagnostic imaging to locate possible heart and lung problems, restrictions in its airways or other conditions that might restrict your pet’s breathing.