Why Are My Dog And Cat’s Blood Triglyceride Levels High Or Low? 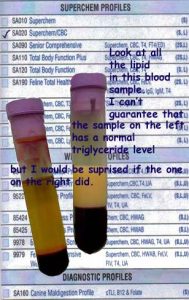 Why Are My Dog And Cat’s Blood Triglyceride Levels High Or Low?

To see what normal blood and urine values are, go here

For an explanation of causes of most abnormal blood and urine tests, go here

To see how tests are grouped, go here 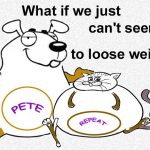 Is my dog or cat a bit too chubby?

The Triglyceride Level Of Your Dog And Cat’s Blood

Triglycerides are a form of fat or lipid. They are composed of a glycerine “backbone” with three fatty acids attached. Triglycerides are the primary type of circulating fat that you and your pet’s cells metabolize for the energy they require to function.

Your body was designed to utilize food carbohydrates moving throughout the body as glucose for its major source of energy. For that we rely on the enzyme, amylase. Many dogs and most cats are not as efficient in doing that as you and I are. Your cat has an even harder time thriving on a high carbohydrate diet.That is why fat in your pet’s diet is more necessary for them than for you. The triglycerides found in meat tend to be saturated fats. Dogs and cats evolved to handle saturated fats much better than we humans.

Besides being an important source of energy for your dog or cat, triglycerides are essential components of the walls (cell membranes) of all cells in the body.

The level of triglyceride and cholesterol in the blood tend to increase and decrease together (read about the causes of high and low cholesterol here). When one or both are high, you pet is said to have hyperlipidemia . That situation is normal after a meal (lipemia). But when it persists throughout the day, problems such as nerve and vision difficulties, seizures, pancreatitis and fatty skin patches (xanthomas) can develop.

Reasons Why Your Cat or Dog’s Triglyceride Level Might Be High (=Hyperlipidemia, Hypertriglyceridemia) :

The most common cause of elevated triglyceride levels is a recent meal (a postprandial blood sample). That is why blood samples from your dog or cat, sent for triglyceride/cholesterol assay, need to be obtained no sooner than 6 hours after its last meal. If the reported level came back high on a non-fasting pet, run them again after more time passed since its last meal.

Fat, inactive dogs and cats are more likely to have persistently high triglyceride and cholesterol levels. Over time, allowing your pet to remain that way is likely to have negative effects on its health.

Hepatic lipidosis is common problem in cats that will not eat due to a number of health issues (anorexia). Such persistent fasting can cause the cat’s triglyceride level to be persistently high. Such cats need to receive nutrients (often through tube feeding) to prevent their downward health spiral.

Pets with sudden (acute) pancreatitis often have elevated triglyceride levels. It is unclear if it is the cause, or result, of the pancreatitis but they are often found together.

High corticosteroid levels, either from medications or due to over-active adrenal glands (Cushing’s disease) can cause elevated triglyceride levels.

Triglyceride levels can also be high in chronic obstructive liver disease (= cholestasis) and occasionally in chronic kidney disease as well.

Some breeds of dogs and cats have high triglyceride and cholesterol levels due to their genetic tendencies (just born that way). These genetic problems have complicated names, such as Idiopathic or inherited hyperchylomicronemia, familial or primary hyperlipidemia and hypertriglyceridemia of schnauzer dogs. When they occur, it is the result of excessive inbreeding. Breeds associated with these genetic problems include miniature schnauzers, Brittany spaniels, beagles, Siamese, domestic shorthair and Himalayan cats. Pets with this problem need a well thought out, lower fat diet – preferably made at home under a veterinary nutritionist’s supervision. Some suggest a fish oil supplement.

A peculiar and rare form of diabetes in cats, due to a tumor in the pet’s pituitary gland (adenoma-induced acromegaly), is also reported to cause high blood triglyceride levels in cats due to the over production of growth hormone (GH). (ref)

Methimazole (Tapazol), given to control hyperthyroidism in cats, is said to sometimes elevate the pet’s triglyceride and cholesterol levels. Megesterol and depopovera® – occasionally given to cats with Eosinophilic granuloma complex or miliary dermatitis can also increase triglyceride levels, as can all corticosteroid medications.

When your dog or cat is overweight and your veterinarian has eliminated other possible explanations for its high blood triglyceride level, a diet change might be in order.