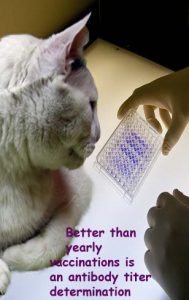 What Does Your Dog or Cat’s Antibody Titer Tell You?

To see what normal blood and urine values are for your pet, go  here

Your pet’s blood antibody titer (level) against specific diseases can be measured in many ways. The most accurate and informative way is with a virus neutralization test (aka VN test = plaque reduction test) Your pet’s virus neutralization titer tells us considerably more than running titer tests that are simpler (HA, HI tests ,IFA and ELISA). The VN test tells us if the antibodies found in your pet are actually protective. But even then, please remember that immunity can last for long periods even after antibodies can no longer be detected in the blood. That is because of a process called immunological memory.

Interpreting your dog or cat’s antibody titer can be considerably more difficult than interpreting many of the other laboratory tests I discuss in this series. There is rarely anything black or white when it comes to your pet’s immunity.

Antibodies (= immunoglobulins) are special proteins that your dog or cat’s immune system designs to kill invading disease organisms. They are also occasionally produced in error; in which case they can be responsible for autoimmune disease and allergies.

Antibodies are produced by your pet’s plasma cells , a type of lymphocyte. Without antibodies, neither us nor our pets could live. Antibodies are designed to recognize and lock onto one single substance (an antigen) that is dangerous to your pet, “tagging” them so that cells in the pet’s immune system can later find and destroy them. Your dog or cat ’s body can produce an amazing number of unique antibodies in this way (about 10x8th different ones = One hundred million)

Your pet’s antibody titer to a virus, bacteria or other foreign protein represents the current circulating amount of one of those unique antibodies that is in its system. It is calculated based on the amount that a serum sample from your dog or cat can be diluted (serial dilution) and still see evidence that antibody is present. If antibody can still be detected when your pet’s blood is diluted 1 part serum plus 7 parts diluent, its titer is 1:8 (one in eight). When that 1/8 dilution is diluted itself in an equal amount of fresh diluent and is stills positive for antibody, the pet’s titer is 1:16. That has traditionally been carried on for ten dilutions which would represent titers of 1/8, 1/16, 1/32, 1/64, 1/128, 1/256, 1/512, 1/1024, and 1/2048. The bigger the second number, the more antibody was present in the original sample and, hopefully, the more immune your pet is to a specific pathogen.

Positive titers (other than colostral titers in puppies and kittens) indicate prior exposure or vaccination. A significant rise in titer over time is very good evidence of current infection (many current antibody tests report in values other than the 1:8-1:2048 scale) . But low titers and no titer can be considerably more difficult for your veterinarian to interpret.

Antibody versus invading disease organisms is a battle that can tilt one way or the other based on the relative levels of both the invader and the antibody, as well as your pet’s general health. It is thought that large numbers of invading organisms (a high challenge dose) can overwhelm antibody levels in dogs or cats that are protect against smaller doses.

At its simplest, a high antibody titer in your pet shows that the pet was exposed to the disease organism or a vaccine composed of that organism. It does not directly tell you that any ill health your pet is currently experiencing is due to that organism. For example, in areas where Lyme disease is present, most dogs have antibody against it. So finding antibody may have nothing to to do with your dog or cat’s current health problems.

Leptospirosis titers of =1:400 are associated with current infection (others use = 1:800 as the cut off) yet some infected dogs never exceed 1:100 (what is more suggestive of a current leptospirosis infection is a rising titer).

Herpesvirus (rhinotracheitis aka cat flu) titer determinations in cats is of little value since these titers are quite erratic.

Some titer levels reported back as “protective” do not prevent re-infection (such as calicivirus titer in cats). But they probably prevent infection from developing into disease (non-sterile immunity). To complicate matters, some pets with no residual titer to calicivirus still seem to be protected.

There are several situations when determining your dog or cat’s antibody titer levels is desirable:

1) After the puppy or kitten’s last initial vaccination series to confirm that it is truly protected.

2) As an alternative to frequent vaccinations – no need for booster vaccinations if the pet is still protected.

3) To identify an ongoing disease or rule it out (but early in disease, antibodies against it may be absent).

4) To detect antibodies produced in error – the cause of autoimmune disease and allergy (currently marketed blood allergy tests, based on antibody levels, do not work).

What Does A High Antibody Titer In My Pet Mean?

It means your dog or cat was exposed to an invading organism, produced protective levels of antibody against it and overcame the infection.

What Does A Low Antibody Titer In My Pet Mean?

It can mean that your pet was never exposed to a specific infectious disease.

It can mean that a vaccine that was given did not protect the pet. That commonly occurs when vaccines are given at too young an age. You are always safer to isolate your puppy or kitten from all sources of infection and wait until its immune system is fully developed before vaccinations are given. When that can not be assured, a series of vaccines need to be given with the final, most important, one given at 16-18 weeks of age.

It can mean that your pet has the disease but has not had time to produce antibody yet.

Does A Low Antibody Titer To A Disease Mean That My Pet Is Not Immune To It?

I mentioned that low titers and no titers can be considerably more difficult for your veterinarian (or your physician) to interpret. That is because of two things:

When it comes to vaccine protection, there are no firm cut-off titer values at which we know for sure that pets are protected or not protected (It is always best to have the lab that ran the antibody test give you their opinion on what constitutes protection or infection – but even these biomedical laboratories are simply making an educated guess).

Since so much is unknown, the laboratories generally err on the side of caution and, because different labs use different methods and interpret their data in different ways, the results from one facility cannot be applied to previous results from another.

The second factor that makes low or no titer results hard to interpret are two phenomenon. One is called mucosal immunity, the other are memory cells. Neither are measured by standard blood antibody titer tests.

Mucosal immunity is a barrier to infection that can prevent invading organisms from gaining access to your pet (ref). Memory cells exist in two types T and B. Years after vaccination, when your pet’s blood titers have naturally decrease, these long-lived cells still have the potential to completely block or lessen the severity of an infection (ask your vet when he/she last saw a case of dog or cat parvo in a pet that received a properly-administered shot at 18+ weeks of age) .

Specific virus and bacteria react differently in dogs and cats that appear to not have antibody against them. No detectable titer against canine parvovirus in dogs or panleukopenia in cats is potentially dangerous. But quite low levels seem to be fully protective. Controlled studies to determine how long the common dog and cat vaccines protect have not been performed. There is really no incentive for vaccine manufacturers to conduct them.

High antibody titers can also produce “sterile immunity”. In those dogs and cats, virus and other invaders are killed or neutralized almost immediately. But low titers can produce “non sterile immunity” – situations where invaders survive for a while, but never reach the numbers required to produce disease and are ultimately purged from the pet’s body.

When your pet is ill, PCR tests for evidence of the pathogens themselves within its body.