The Sodium Level Of Your Dog And Cat’s Blood = Na+ 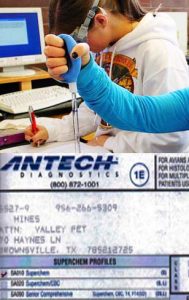 The Sodium Level Of Your Dog And Cat’s Blood = Na+

Sodium is the most prevalent mineral in your cat or dog’s blood stream. When dry, sodium exists as common salt, but when dissolved in the blood, salt separates into its electrolyte halves, sodium (Na+ =cation) and chlorine (Cl- =anion).

In that disassociated form, most of the sodium is found in the fluid portion of your dog or cat ‘s body. The next most common mineral is potassium. However most of your dog or cat’s potassium (K+ ) resides in the fluid within the cells of its tissues. A small portion resides in the blood. Blood sodium and blood potassium tend to fluctuate in tandem – when sodium is high potassium is usually low and vice versa. Read about your pet’s sodium to potassium ratio here.

Levels of sodium in your dog or cat ’s blood stream are controlled by a hormone produced in its adrenal glands called  aldosterone. Aldosterone alerts its kidneys of the need to conserve and reabsorb sodium from the urine as it is produced, or (by its absence) let excess sodium leave the pet’s body through its urine.

Sodium is important in keeping body fluids within your pet in their right location as well as in the proper action of its muscle and nerve cells.

Reasons Why Your Dog Or Cat’s Blood Sodium Level Might Be Higher Than It Should Be (= hypernatremia):

True hypernatremia (=high blood sodium) is relatively uncommon in dogs and cats. What is common is dehydration hypernatremia (pseudohypernatremia) that increases the amount of sodium because the smaller total volume of blood has become more concentrated. However, the total amount of body sodium in that situation has not changed.

There are a lot of things that can cause dehydration. One is lack of available water. Another is over-exercise and panting. A third is heat stroke and a fourth is prolonged fever.

Loss of large amounts of body fluids through large skin wounds or burns can also elevate your pet’s blood sodium in that way. True hypernatremia can be an effect of prolonged administration of high doses of corticosteroid medications (eg prednisone) or overactive adrenal glands that produce too much similar natural cortisol (Cushing’s disease/ hyperadrenocorticism).

High blood sodium levels also occur in a rare form of diabetes (diabetes insipidus). It can also occur in some forms of kidney disease and an unusual form of adrenal gland disease (hyperaldosteronism). Among other rare causes would be pets forced to drink salty water or consume highly salted food, overuse of certain laxatives (eg lactulose, sorbitol) , or overly concentrated (hypertonic) intravenous fluids. Newborn puppies and kittens also have more difficulty controlling their blood sodium levels than more mature dogs and cats because their kidneys are not fully developed yet. (ref)

Chronic, mild dehydration that could elevate your pet’s blood sodium is thought to be most common in cats consuming dry cat foods. The signs of dehydration, as in humans, can be nebulous (vague) and only significant over time [ref1 , ref2, ref3]. More severe dehydration can accompany any disease in which apathy or reduced mobility occurs.

Reasons Why Your Dog Or Cat’s Blood Sodium Level Might Be Low (= hyponatremia) :

The most common cause of low blood sodium (hyponatremia) in dogs and cats is prolonged vomiting and/or prolonged diarrhea.

The second most common cause is Addison’s disease (hypoadrenocorticism) a disease of your pet’s adrenal glands.

Hyponatremia can also occur in your pet when diabetes is not well controlled and the pet’s blood sugar levels remain higher than they should be. That is because high blood sugar levels can pull additional fluid out of cells ,increasing blood volume and diluting electrolytes like sodium. It does not necessarily occur because the pet’s kidneys attempt to counteract that effect.

Sodium can leave your pet’s blood stream and enter abnormal fluid accumulations that exist in your dog or cat. That can happen in FIP in cats, free fluid in the chest (chylothorax) pancreatitis and peritonitis. Levels can also fall temporarily after relieving urethral blockages in cats with FUS .

Blood sodium levels can also be low in dogs and cats in end stage kidney failure and other health problems that cause a lower than normal blood pH (metabolic acidosis ).

Fatty (lipemic) blood samples obtained too soon after a meal or in pets with other health issues (too much blood protein) can cause blood sodium levels to falsely appear low.

Contrary to what veterinarians once believed, increasing your pet’s salt intake does not increase its thirst or water consumption. ( read here & here )