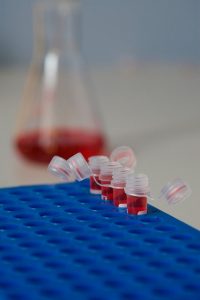 The ACTH test is used to detect problems with your pet’s adrenal gland function. Your dog or cat ‘s two adrenal glands are located next to its kidneys. Part of their responsibility is to produce the steroid hormone, cortisol. Cortisol is your pet’s natural hydrocortisone.

When they produce too much cortisol, a condition called hyperadrenocorticism or  Cushing’s disease occurs. When they produce too little cortisol (and usually a related hormone,  aldosterone) they cause a condition called hypoadrenocorticism or Addison’s disease. You can also read how Cushing’s disease is verified with the ACTH test and your dog’s treatment options here.

Your pet’s adrenal glands are under the control of its pituitary gland. That gland uses a hormone, ACTH, to signal the adrenals when they need to produce more cortisol.

In this test, a synthetic form of ACTH (Cortrosyn) is administered to your dog to judge how well its adrenal glands and pituitary gland respond. Besides being responsible for signaling your pet’s adrenal glands to produce cortisol, it also encourages them to produce dehydroepiandrosterone (DHEAS) [for sex steroid synthesis]  and aldosterone (to regulate  your pet’s blood sodium,  potassium and blood pressure)

Hyperadrenocorticism (too much cortisol or Cushing’s disease) is almost exclusively a disease of dogs. It is extremely uncommon in cats. When cats show signs of Cushing’s disease, it is almost always caused by giving them high doses of corticosteroid medications (eg prednisolone, Depomedrol®) over extended periods of time.

Among dogs, miniature poodles, Boston terriers, beagles, dachshunds and boxers develop the problem a bit more than other breeds.  In most cases, a small tumor in the pet’s pituitary gland is responsible for the problem.

The ACTH test is not the test of choice for many veterinarians when detecting Cushing’s disease in dogs.

For that, the Urine cortisol:creatinine ratio screening test, followed by a low dose dexamethasone suppression test (LDDST) is preferred, when the Cortisol:Cr is positive. The LDDST test picks up about 90-95% of the Cushing’s cases. The ACTH stimulation test only about 80-85% of the Cushing’s cases. When it is sex steroids that are being over-produced by the dog’s adrenal glands, neither test is very helpful. (for that you need the Atypical Cushing’s test as run at the University of Tennessee)

The opposite, problem – too little cortisol or hypoadrenocorticism (Addison’s Disease, Adrenal insufficiency) is also quite rare in cats. It is not nearly as common in dogs as hyperadrenocorticism where too much cortisol is present.

For this disease, the ACTH test is the test of choice. The classic results of the test in Addison’s disease is a very low to undetectable amount of blood cortisol before and after the ACTH dose is given.

The ACTH test can also be used to determine how effective the treatment of your pet’s Cushing’s disease with mitotane, (Lysodren®) or Trilostane® has been. Some also consider the ACTH test to be the best test for detect the effects of over-administration of corticosteroids (iatrogenic Cushing’s disease).

How This Test Is Performed:

There are several versions of the ACTH test. But in all of them, a blood sample is first taken from your pet before any medications are given. That will be for its baseline (“resting”) blood cortisol determination.

That initial cortisol level will probably be a bit low in dogs with poorly-functioning adrenal glands (Addison’s=hypoadrenocorticism). But your veterinarian will not know if that is because of a real adrenal gland problem, due to the natural daily fluctuations in cortisol levels, or because of some non-adrenal illness.

Then, a dose of an ACTH product  (Cortrosyn or an ACTH gel) will be injected, intramuscularly (or IV) into your pet.

One to two hours later, depending on the product injected, a second blood sample will be obtained from your pet again for a cortisol level determination.

At this point, dogs with Addison’s disease could be expected to show no or little rise in their cortisol levels because their adrenal glands are incapable of responding to the ACTH injection.

It has been shown that the LDDST is more sensitive with fewer false negatives, but it is less specific (more false positives), than the ACTH stimulation test in dogs with significant non-adrenal illness – especially liver disease.

When the ACTH stimulation  test is run on  dogs with Cushing’s disease, the expected results would be to have a 1-2 hour post-ACTH injection cortisol level considerably higher than before they received the ACTH injection and higher that the level rise in normal dogs (The adrenal glands of Cushing’s dogs have adapted to produce higher than normal cortisol when they are stimulated by ACTH).

However, the drawback with the ACTH test is that a sizable portion of the pets that do have Cushing’s disease do not have that spike in cortisol after the injection of ACTH – particularly if their Cushing’s disease is the result of an adrenal gland tumor.  That makes the ACTH test only 60-90% effective in detecting dogs with Cushing’s disease and that is why the LDDST test is often preferred. The LDDST also has the advantage in that it can pick up clues as to whether you dog has an adrenal tumor or a pituitary gland tumor (30%-50% of the time it is able to do that correctly).

Dogs with normal adrenal gland function should have increased cortisol blood levels in the 1 hours post injection sample. But their increase will be considerably less than in dogs with Cushing’s disease.

Dehydration, prior administration of corticosteroid medication or certain medications (mitotane, trilostane or ketoconazole) can invalidate the test results when it is being used to diagnose Addison’s disease. But it will confirm that those medications have been effective in reducing your pet’s adrenal gland function – if that was the intended use of the test.

Stress can invalidate or affect the test results too; as can lipemic or  turbid, or hemolyzed or elevated bilirubin blood samples.

The synthetic ACTH products that your veterinarian injects have become very pricey. So your vet might use a low dose ACTH test has been developed to keep that cost down. I appears to be equally as good as the older standard-dose method.

Veterinarians at Mississippi State and Purdue universities determined that a single blood assay of the pet’s Cortisol-to-ACTH Ratio was an effective way to diagnose Addison’s disease (hypoadrenocorticism or low cortisol).  I know of no laboratories offering the test.