Why Were Poikilocytes Seen In My Dog Or Cat’s Blood? 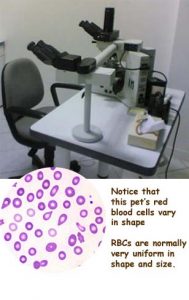 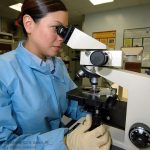 Why Were Poikilocytes Seen In My Dog Or Cat’s Blood?

Poikilocytes Seen In Your Dog Or Cat’s Blood Exam

Poikilocytosis describes shape abnormalities seen in your dog and cat’s red blood cells (RBCs =  erythrocytes). Red blood cells are normally produced by stem cells in your dog or cat’s bone marrow in never ending look-alike clones. Since red blood cells only live a few months, untold numbers must be created day after day. Normally one looks pretty much like the next.

When more than a very few show differences in their uptake of coloring laboratory dyes (polychromasia) or appear differ in their size (anisocytosis) or, in the case of poikilocytosis, differ their shapes; something troubling  is brewing.

Clinical pathologists take great pleasure in giving abnormal cells exotic difficult-to-pronounce names (often more than one to what is essentially the same abnormality).  Consequently, they have probably gotten carried away in divided the various shapes that abnormal RBCs assume into nine major groups. For the record, they are: sherocytes, leptocytes, target cells, stomatocytes, folded cells, speculated RBCs, schistocytes, acanthcytes and echinocytes.

There is a lot of term overlap and guesswork as what might be the cause one or the other shape change in your dog or cat. So using these shape abnormalities to diagnose what might be wrong with your pet is really not much help to your veterinarian.

However with that said, echinocytes are sometimes due to too much anticoagulant in the blood collection tube, schistocytes seem to correlate well with blood flow turbulence – such as drawing the blood into a test tube to forcefully, target cells with cases of anemia, and spherocytes with auto-immune disease.

Some General Health Issues That Could Cause Poikilocytosis In Your Dog Or Cat:

About one quarter of dogs that have babesiosis , a blood parasite infection, also have poikilocytosis. Poikilocytosis is also a common finding in dogs and cats treated with the anti-cancer drug, doxorubicin.

Poikilocytosis is also a feature in some cases of liver disease in cats. It can also be seen in systemic crisis situations – such as DIC (= disseminated intravascular coagulation).

Just about anything that affects your pet’s red blood cell formation occurring in its bone marrow can be the cause of these abnormally shaped red blood cells being present.

Blood turbulence after the RBCs are formed (as in hemangiosarcoma tumors or certain forms of heart disease ) have also been associated with poikilocytosis.

A novices’ technique in applying a drop of blood to a glass slide (blood smear) to be submitted to a central laboratory can falsely distort the shape of dog and cat red blood cells (technique artifacts). Using too much EDTA anticoagulant while collecting the specimen of blood can do that as well.