Why Might My Dog Or Cat’s Sed Rate Be Increased or Decreased? 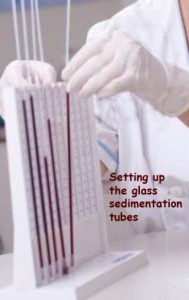 Why Might My Dog Or Cat’s Sed Rate Be Increased or Decreased?

Read a second Vetspace article on ESR with a slightly different explanation here.

This vintage test (since 1897) does little more than confirm to your veterinarian that your dog or cat really has a health issue. It measures how fast your pet’s red blood cells (RBCs) sink to the bottom of a glass tube in which a blood sample with added anticoagulants was placed.

That rate, measured over a period of one hour, increases when inflammation is present anywhere in the body. The test relies on changes in the electrical charges between RBCs that keep them in suspension versus clotting factors that cause RBCs to stick to one another (rouleaux formation, high blood fibrinogen level) and sink to the bottom. Because anemia markedly increases your pet’s sedimentation rate, laboratories have a mathematical formula to correct the ESR number (value) when anemia is present.

Tests like the ESR are called “high sensitivity-low specificity” tests. Like having a fever, they tell you there is a problem – but not what it is. More modern tests that detect inflammation, like C-reactive protein (tests that monitor acute-phase response), have largely replaced the ESR test.

The ESR test might also have value for your veterinarian in deciding if your cat or dog  is responding as well as hoped for to its treatment.

Reasons Why Your Dog And Cat’s Sed Rate Might Be Increased:

The ESR rate also goes up (increases) significantly in sudden (acute) generalized infections – the kinds that affect the whole body and which cause widespread inflammation, usually producing fever and make your dog and cat visibly ill. The cause could be due to a bacterial or a viral infection.

Dogs with severe long-standing arthritis, or pets suffering from cancers that release inflammatory compounds causing visible decline in their health can also have increased ESR rates.

Sed rates were once reported to be elevated in dogs with roundworm infections – but other health issues could have actually been the underlying cause.

Reasons Why Your Dog And Cat’s Sed Rate Might Be Decreased:

Blood samples that have been stored tend to give falsely lower ESR rates – particularly if that storage was at room temperature and not in a refrigerator.

It has been published that hemolytic anemia – the kind of anemia due to toxins or autoantibodies that destroy a pet’s own red blood cells while they are still in circulation – has the ability to decrease ESR rates. It has also been discussed that low blood fibrinogen levels due to liver disease might slow your dog and cat’s ESR rate. In humans, anemia from a variety of causes such as advanced age, kidney or thyroid issues and a variety of medications have also been linked to changes in ESR rate. Anything that increases the viscosity of blood (such as dehydration) might also slow the pet’s ESR rate.

Complementary Tests That Come To Mind:

It would be quite unusual for your cat or dog’s ESR to be abnormal in the absence of other abnormalities in your dog or cat’s CBC or WBC and blood chemistry tests . ESR is just a general marker of inflammation. As such, a high ESR does not tell your veterinarian where or why that inflammation is occurring. It only tells you and your veterinarian that there is a health issue somewhere. Hopefully, other abnormalities in your pet’s CBC/WBC, your veterinarian’s physical examination and the history you provide will give him/her hints as to how to proceed in making the diagnosis.