Why Might My Dog or Cat’s Red Cell Distribution Width Be Increased? 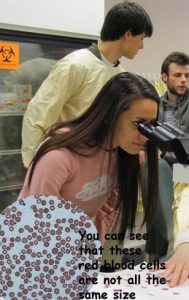 Your pet’s red blood cells (=erythrocytes= RBCs) should be very uniform in size. Red blood cells or RBCs make up ~25% of all the cells in the body. I have seen it written that the average dog produces and destroys about 800,000 RBCs every second; but I cannot confirm that that is true. Both dogs and cats have an enormous number of RBCs (adult humans have ~ 20–30 trillion). The average life span of a human RBC is 100-120 days. (ref)

Each red blood cell must be extremely small and uniform in size to pass through the small capillaries of your pet’s body without hindrance (getting stuck). One factor in determining RBC size is the number of cell divisions that occur between the red cell’s formation from stem cells in your dog or cat ‘s bone marrow and the time they leave the marrow mature (a protein, [cyclin D3] , is involved in that regulation).

In certain health issues, red blood cells may not be as uniform in size as they should be. Veterinarians use a mathematically calculated value, the RDW, to know when that is occurring. The actual measurement is of the volume or size of your pet’s RBCs or its MCV. A high RDW means that there is too much variation in the size of your pet’s RBCs.

Knowing that is occurring gives your veterinarian hints as to the possible cause of a confirmed anemia. The same problem will also be picked up as anisocytosis( RBC size variation) being noted in your pets CBC/WBC  lab results.

Why Your Cat or Dog’s RDW Might Be Higher Than Normal:

The RDW is not a stand-alone test. I do not put much faith in its ability to differentiate one cause of anemia from another. But it does add a bit of evidence – if the rest of your pet’s blood work agrees with what is generally accepted as the causes of abnormal RDW:MCV relationships.

When your pet has a vitamin B12 deficiency, as might occur with chronic intestinal problems like Inflammatory Bowel Disease, Its Red Blood Cell Distribution Width (RDW) will increase. The same thing can occur with a folic acid (folate) deficiency. In both cases the MCV tends to be elevated as well. Traditionally, in those cases, anisocytosis is also noted by the central lab technician viewing your dog or cat’s blood slide microscopically and jotted down in the pet’s CBC/WBC results. Some of the larger national labs now have machine algorithms that allow those sort of visual notes to be added automatically.

High RDW can also occur with iron deficiency anemia. In those cases, the MCV is often low.

Fragmentation (turbulence) anemia or any anemia in which the RBCs are destroyed while in the pet’s circulation (a hemolytic anemia) can cause RDW to be high and MCV to be low.

In humans, high RDW is sometimes associated with liver disease. We do not know if that if the case in dogs and cats.

A combination of several causes can also be responsible for an elevated RDW in your dog or cat.