Why Is There Ketone In My Dog Or Cat’s Urine? 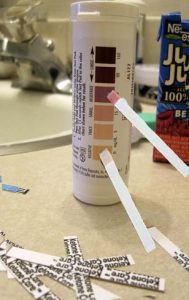 Why Is There Ketone In My Dog Or Cat’s Urine?

Ketone In Your Dog Or Cat’s Urine = Ketonuria

Most of the thin in-office test strips that veterinarians use to analyze a sample of your dog or cat’s urine contain a segment that changes color when ketones are present. There should not be any. When your pet’s urine does contain ketone bodies, it is usually because your pet is burning its stored fat for energy instead of utilizing the glucose in its blood or glucose generated by its liver (from glycogen). That often occurs when illness causes pets to refuse to eat, when diabetes prevents them from utilizing their blood sugar properly or when they face starvation.

Reasons Why Your Pet Might Have Ketone (ketone bodies, ketosis) In Its Urine:

As I mentioned, unmedicated or poorly controlled diabetes in dogs and cats is commonly responsible. Starvation need not be the absence of food. Bizarre diets and diets inappropriate for carnivores can lead to the problem as well.

A long list of systemic illnesses (those that affect the entire body) cause dogs and cats to lose their appetite. In those situations ketosis is common.

Young and growing pets have much higher nutritional demands than mature pets. The same goes for mature pregnant females. That group is at a higher risk for developing ketoacidosis.

A  blood BHB (ß-Hydroxybutyrate) would confirm positive urine ketone results and the presence of ketoacidosis. But the test is rarely if ever utilized in general practice (ref) , CBC/WBC and blood chemistry panels including blood glucose and fructosamine levels and then secondary tests at your veterinarians discretion.