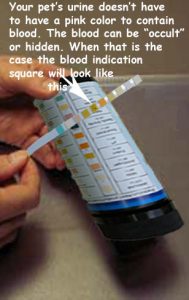 Why Is There Blood In My Dog Or Cat’s Urine?

There should never be visible or invisible (occult) blood in your dog or cat’s urine. All the blood that is in your pet’s body eventually passes through its kidneys; but the many filtering sieves in those kidneys (glomeruli ) are designed to allow only excess fluid, salts and dissolved waste to pass through them and into the urine. Red and white blood cells can’t pass in significant numbers when your pet’s urinary tract is healthy.

Veterinarians generally use a simple “dipstick”, (a thin strip of thick absorbent paper that has been impregnated with chemicals that change color to detect a wide variety of urine ingredients) to detect blood in your dog or cat’s urine. One section of that strip detects the peroxidase enzyme in hemoglobin that is normally present in red blood cells – there should not be enough present to change the color of the strip.

Whichever, a positive dipstick reaction indicates one of two things. Blood has leaked into your pet’s urine somewhere between the filters and the point at which urine leaves your pet’s body or hemoglobin has been released from red blood cells that are still circulating in your pet’s body. Hemoglobin, once released, is not held back by the kidney sieves.

Of those two possible causes, the first (blood leakage into the urinary tract) is the most common. The two major causes for that are a urinary tract infection (UTI) or urinary tract stones (calculi).

FUS in cats is a common cause for blood to be present in the urine while bladder infections are a more common cause in dogs (females).

Less common causes for bleeding into the urinary tract are kidney infections and, in older pets, cancer.

All the health problems that cause blood not to clot properly (coagulopathies) such as eating rodent poison, bone marrow cancers, genetic tendencies to bleeding , etc. can also be responsible for blood being present in your pet’s urine.

False positive test results can also occur due to too vigorous catheter or needle (cystocentesis) techniques.

The second group of causes occur when red blood cells that are still in your dog or cat’s circulation are destroyed in sufficient quantity so that the hemoglobin they contain spills over into your pet’s urine and gives a false indication of blood-cell leakage. This is called intravascular hemolysis . The most common reason for that is autoimmune disease in which the pet’s body has produced antibody that destroys its own red blood cells (autoimmune hemolytic anemia or IMHA). It occurs more commonly in dogs than cats (and 11-33% of the dogs experiencing IMHA are American Cocker Spaniels).

Even more rarely, red blood cell destruction occurs as transfusion reactions after your pet has received a blood transfusion. That can be due to a prior transfusion (even of plasma or serum) or due  antibodies (alloantibodies) stimulated by a prior pregnancy/delivery.  Some cats appear  to naturally possess antibodies that can destroy transfusion blood the even first time they receive it, resulting in hemoglobinemia and hemoglobinuria.

Hemoglobinuria, resulting in positive urine blood reaction can also occur in pets that have been bitten by coral snakes or fire ants. It has also been seen in dogs that ate automatic dish washing detergent.

When blood cell destruction (hemolysis) does occur in cats, feline leukemia, Mycoplasma hemofilis (=hemobartonella), Cytauxzoon felis, cholangiohepatitis and lymphoma  have all at times been identified as underlying causes. It has also been reported to occasionally occur as a bad reaction in cats receiving  methimazole for hyperthyroidism .

Certain bacteria involved in blood infections (septicemia) liberate toxins that can also be the cause of high levels of free hemoglobin that can pass into the urine. (ref)

On rare occasions, severe muscle damage or overexertion will release muscle myoglobin into the blood stream (myoglobinemia), which will also make the standard dipstick test falsely appear positive for blood.