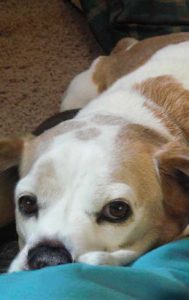 Why Is My Dog Or Cat’s Urine Cortisol:Creatinine Ratio Abnormal?

The cortisol-to-creatinine ratio of your dog or cat’s urine (its first void of the morning – obtained at home and brought  to your veterinarian) gives your vet considerably more information than a single resting blood cortisol level determination regarding the condition of your pet’s adrenal gland and the pituitary gland on which adrenal glands rely on for instructions. This test is most commonly used as an initial screening test for Cushing’s disease.

Although this test is not nearly as accurate as the ACTH stimulation test or Dexamethasone suppression test in judging your pet’s adrenal gland function, it is a simple, non-invasive (no needle), lower cost initial screening test for adrenal gland problems like Cushing’s disease When the test is normal, Cushing’s disease is unlikely to be your pet’s problem. But when the results are elevated, there are other stress-related and non-adrenal gland diseases that could account for it. In those cases, an  ACTH  stimulation or Dexamethasone suppression test will still have to be performed to confirm that the initial UC:Cr results were meaningful. The UC:Cr test or index can also be used as an initial screening test to help rule out Addison’s Disease (the reverse problem as Cushing’s Disease – too little cortisol) although that use of the test is considerably less frequent.

What Conditions Could Cause My Pet’s Cortisol:Creatinine ratio to be elevated?

False-positive elevations can be due to diseases of the stomach/intestinal, kidney, lower urinary tract, liver, neurologic, immune-mediated diseases or congestive heart failure.