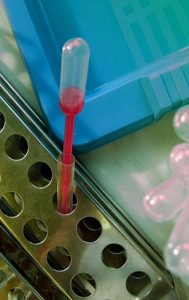 Why Is My Dog Or Cat’s Glycosylated Hemoglobin Level High Or Low?

Measurement of your pet’s blood glycosylated hemoglobin (GH) , like the fructosamine test, is a better indication of your dog and cat’s blood sugar level over extended time than a single blood glucose determination with a glucometer

If you read my section on glucose tests, you already know that many things can cause glucose to be released into your pet’s blood stream in spurts. Sometimes, your pet’s anxiety over a trip to the vet is all it takes to cause one of those spikes. So single reading or readings are are not nearly as helpful as measuring blood chemicals like glycosylated hemoglobin or fructosamine that form over longer periods of time in relation to your pet’s average blood sugar levels – not the occasional spikes that occur.

A small amount of the oxygen-carrying compound in your pet’s red blood cells, hemoglobin, binds to some of the glucose that is also in your pet’s circulation. When that happens, glycosylated hemoglobin is formed. The more sugar (glucose) that is present over an extended period, the more GH gets formed. Over the red blood cell’s life span of ~ 120 days in dogs and ~65 days in cats GH continues to build up. And once formed, glycosylated hemoglobin is quite stable. When measured at the lab, the value reflects your pet’s blood sugar level over the previous 3-4 months (in dogs) or 2-3 months (in cats). That is even a longer span of time than that the data obtained through the fructosamine test.

Some Reasons Your Pet’s Glycosylated Hemoglobin Value Might Be High:

Diabetes mellitus (if present for over a month or so). Diabetes is far-and-away the most common cause of high GH levels in dogs and cats. Read about diabetes in dogs here , in cats here.

A situation much less common occurs when dogs and cats have too many red blood cells (polycythemia). Those pets will have elevated glycosylated hemoglobin levels as well. Polycythemia (more than the normal number of red blood cells) is normal in greyhounds.

Some Reasons Your Pet’s Glycosylated Hemoglobin Value Might Be Low:

Anemic pets have less hemoglobin – so their glycosylated hemoglobin levels will be lower as well.

The life span of your pet’s red blood cells can be abnormally short. Abnormalities of the spleen and autoimmune disease can do that. So can toxins, such as the zinc in an ingested penny, nutritional deficiencies, blood parasites, low blood phosphorus levels, acetaminophen (Tylenol™), aspirin, onions etc. In any of those situations where RBC circulation lifetime is shorter than normal less GH will be present.