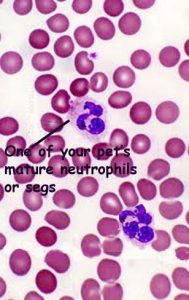 Why Is My Dog Or Cat’s Blood Neutrophil Count High Or Low?

I do not know why neutrophils go by so many names. Perhaps it is because so much time has passed since they were recognized as being so important. It was near the advent of modern medicine. (ref) Whatever you call them, the main job of neutrophils is to defend your dog or cat’s body against bacteria and other invaders. Every day of its life, your dog or cat encounters bacteria, fungi or protozoa capable of causing it harm. When that occurs, your pet’s innate immune system’s job is to protect it from those invaders. Your pet’s blood neutrophils are armed with a variety of “weapons” against pathogens. ( read here ) Neutrophils are a type of myeloid (bone marrow) cell. After release into the bloodstream, they are programmed to respond to inflammation anywhere in the pet’s body. In us humans, neutrophils constitute  50–70% of all of our circulating white blood cells. In dogs they constitute 60-77 % while in cats 35-75 % .  (read here)

Neutrophils rapidly move through your pet’s blood stream to the site of an infection. There they bind to and eat (phagocytize) bacteria and other unwanted agents that they encounter.

Unlike the other phagocytic (engulfing) cells, the monocytes and their derivatives, the macrophages, neutrophils have a short life. Neutrophils are produced from stem cells that reside in your dog and cat’s bone marrow (pluripotent hematopoietic stem cells). Pluripotent cells are those that can produce more than one blood cell type depending on the need. Once neutrophils leave the  bone marrow they enter the bloodstream. Here they circulate for about a day (sometimes less) then they migrate into your pet’s tissues to live another 1-2 days before self-destructing (apoptosis). What is left of them is cleared away by your pet’s macrophages.

Neutrophils should form and leave your pet’s bone marrow at a steady, constant rate – until an “emergency situation” occurs. When such a situation occurs (such as an infection) healthy bone marrow stem cells are capable of producing large numbers of neutrophils extremely fast. In that hurry-to-leave the number of  band cells or young (not quite mature) neutrophils entering your dog or cat’s blood usually increases as well (=”shift to the left” = “Shilling shift”). The more mature neutrophils (Segs), are recognized by their multi-lobed (=segmented=lobulated) nucleus. Together, both segs and band cell neutrophils circulate in your pet’s blood stream hugging the walls of small blood vessels (marginating cells). There they look for the telltale chemicals released by damaged tissue, inflammation or the invading microorganisms themselves.

Your pet’s macrophages, monocytes and other policing cells also remain on constant look out for invaders. When they sense them, these cells release chemicals that attract neutrophils (such as interkeukin-8). Neutrophils that rush to the rescue are the primary constituent of pus;  such as what drains from the cavities within abscesses that occur so commonly after cat fights or around a splinter in your dog’s paw.

Reasons Why Your Dog And Cat’s Neutrophil Count Might Be High (Neutrophilia):

High levels of neutrophils in the blood stream occur in many infections. In many cases, the burst of circulating neutrophils subsides after the first few days of infection.  Other forms of inflammation, such as wounds and surgery (ref) can temporarily elevate circulating neutrophil numbers as well. Not only physical stress elevates neutrophil numbers. Psychological stress can cause a transient neutrophil elevation too. (ref)  All of these situations stimulates your pet’s adrenal glands to liberate cortisol corticosteroid, and epinephrine also raise neutrophil numbers (a “stress leukogram”). In fact, the lack of neutrophilia after a stressful event helps diagnose dogs with an adrenal problem called Addison’s disease.

Autoimmune and allergic reactions can liberate chemicals (inflammatory cytokines) that cause high neutrophil numbers as well.

On rare occasions, a pet’s continuing high neutrophil numbers are due to a bone marrow tumor of the stem cells that produce neutrophils (myelogenous leukemia).

Reasons Why Your Dog Or Cat’s Neutrophil Count Might Be Low (Neutropenia, Agranulocytosis):

When your dog or cat encounters an overwhelming infection, its bone marrow can simply run out of neutrophils to release into the pet’s blood stream. That causes blood neutrophil numbers to rapidly drop. The same thing can occur when infectious organisms liberate large amounts of destructive toxins (acute endotoxemia).

Any of the diseases, toxins or drugs that affects your pet’s bone marrow ( see M:E ratio ) can also cause neutropenia.

Certain medications (eg methimazole for hyperthyroid cats, cephalosporin antibiotics like Keflex® and other betalactam antibiotics), and anti-cancer medications such as cyclophosphamide can lower your dog and cat’s neutrophil numbers (probably through their effects on the bone marrow).

CBC/WBC and  blood chemistry panel , body temperature, further tests based on those results and your veterinarian’s physical examination of your pet.