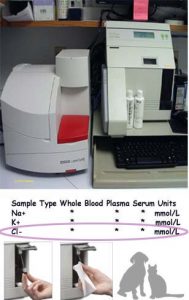 Why Is My Dog Or Cat’s Blood Chloride Level High Or Low?

The Chloride Level Of Your Pet’s Blood = Cl−

The proper amount of two salts, sodium chloride (NaCl) and potassium chloride (KCl ), your dog or cat ’s blood and within its cells are basic essentials for life.

When either salt is dissolved in the liquids within your pet’s body, it separates in the its positively charged (cation ion) half (sodium or potassium), and its negatively charged chloride half (the Cl- anion ion). All three are important constituents of your pet’s blood electrolytes and each of the three has an independent function.

Chloride, reformed into hydrochloric acid by your pet’s stomach (ref) , is essential for your pet’s digestion of food.

Even very minor changes in the number of chloride ions in your pet’s blood has profound effects on your dog or cat’s body. When sufficient salt is available in your pet’s diet and its kidneys are working normally, the amount of chlorine,  sodium and potassium are tightly controlled by your dog or cat ’s kidneys. (ref)

A blood chloride test for your pet is almost never ordered by itself. It is usually ordered as part of a standard electrolyte panel or complete chemistry panel.

Your dog or cat’s blood chloride level usually goes up and down in tandem with your pet’s blood sodium (Na+) level.

High levels of both often occur when your pet is dehydrated. That could be due to your pet’s refusal to drink, persistent diarrhea, vomiting (when dehydration exceeds stomach acid loss) , fever or excessive exposure to heat. Large doses of diuretics, given for other health problems can also contribute to dehydration in your pet (but the most commonly used one, furosemide (Lasix®) often given for heart failure in pets , also encourages sodium, potassium and chloride loss; so the net effect can be unpredictable).

Most of the time, your pet’s blood chloride level will mirror that of its blood sodium – going up or down together and for the same reasons. However, occasionally, diarrhea or the excessive intake of potassium chloride (KCl) (as in specially-prepared IV fluids) will cause your pet’s chloride levels to rise independently of sodium. So can body acidity disruptions (abnormal body acid:base balance) as well as hyperventilation (respiratory alkalosis) or chronic kidney disease.

Reasons Your Pet’s Blood Chloride Level Might Be Low (hypochloremia):

As with high blood chloride, low blood chloride often occurs in tandem with low blood sodium levels. The most common cause of a low chloride reading in dogs and cats is a sustained period of vomiting (when stomach acid [ HCl] loss exceeds the dehydration that vomiting can cause).

Lower-than-required dietary salt intake could conceivably lead to a chloride deficiency – but almost never does.

CBC and Blood Chemistry Panel, including sodium, potassium, bicarbonate (total CO2 ), other tests and procedures to determine the cause of elevated or low blood sodium when both sodium and chloride are high or low ( Click this article it was designed to help physicians, but it applies equally well to our pets ) Re-draw and re-run the Chloride determination if the original blood sample might have been lipemic or hemolyzed.