Why Is My Dog Or Cat’s Bleeding Time Increased? 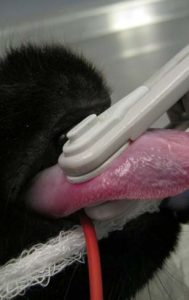 Why Is My Dog Or Cat’s Bleeding Time Increased?

This simple in-office screening test allows your veterinarian to measure how well your dog or cat ’s blood clots (hemostasis) after an injury or incision. That depends on how well its blood platelets and the complicated clotting mechanism are functioning. Your veterinarians might be motivated to run this test if your pet is anemic, bleeding without an explainable cause or because extensive surgery is contemplated.

For a wound of any sort to stop bleeding, a plug (of adhering, sticky blood platelets) must form in the blood vessels supplying it. To perform the test, a prick is made in the inner surface of your dog’s lip and a stop watch is used to measure the period of time it takes before the flow of blood from the wound to cease. Similar tests could be performed on cats – but rarely are; I generally check their clotting speed on glass.

The chief problems with the bleeding time test are restrain of the pet during the procedure and variations in the results due to differing techniques and oral vascularity (the pet’s capillary bed).

Some have used the BMBT as an initial screening test on Doberman Pinscher dogs for a genetic blood clotting defect called von Willebrand disease, although more sophisticated tests need to be run when results are positive or suspicious (the latest Ettinger’s Expert Consult, 7e that I have finds no correlation between vWD levels and BMBT bleeding time).

A similar test times how long a toenail that has been sheared to the quick, continues to bleed (eg Cuticle Bleeding Time CBT aka Toenail Bleeding Time TBT). It is painful to your pet and I do not suggest it.

Your dog or cat’s bleeding time can be extended when it has received NSAIDs (such as aspirin, Rimadyl®, Deramaxx®, Previcox®, etc.) – particularly if the pet already has other health issues that delay its blood coagulation or if it has genetic bleeding tendencies (such as mild von Willebrand disease [vWD]).

Bleeding time it can also increased in liver failure due to reduced clotting factor production. (ref) and in a specialized form of liver disease, portosystemic shunts. ( read here )

A similar situation can occur in pets that are uremic (azotemic) due to advanced kidney disease and occasionally in pets with congestive heart disease … (read here) as well.

Blood clotting can also be delayed in dogs infected with Leishmania,   Ehrlichia or Anaplasma (Wikipedia is mistaken, it also occurs in dogs) or in cats that are carriers of FLV or FIV.

Diseases that involve the bone marrow (myeloproliferative disorders) can also be responsible as will any other illness that causes low thrombocyte (= blood platelet) numbers.