Why Is My Dog Or Cat’s Basophil Count High Or Low? 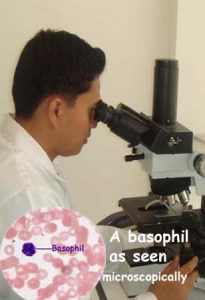 Why Is My Dog Or Cat’s Basophil Count High Or Low?

The Number Of Basophils In Your Pet’s Blood “Basos”

The basophil is one of your dog or cat’s white blood cell  types. It is a very uncommon cell in most pets (and humans), so often none are seen when blood is examined microscopically. Basophils form in your pet’s bone marrow from progenitor cells that can also produce mast cells, which are the basophil’s closest relative. Of all the white blood cell types, we know the least about what basophils functions are in health or disease. (read here)

An over abundance of basophils (= basophilia) is quite rare. When your pet’s basophil numbers are above normal, it is often in conjunction with an increased number of eosinophils, another of your pet’s white blood cells that is associated with allergies and parasitic worms. Like their cousins, the mast cells that are found scattered stationary throughout your pet’s body tissues, basophils contain histamine, a compound always involved in allergic reactions.

In the rare cases where too many basophils are present, but your dog or cat’s eosinophil count remains normal, bone marrow problems involving the cells that give rise to basophils (hematopoietic stem cells) are generally involved. Those problems are often cancerous.

I mentioned that increased basophil numbers are often found in association with higher than normal eosinophils numbers being present  in the blood or the presence of internal parasites or allergies.  Flea infestations might also be a cause. Basophil numbers occasionally go up in liver disease . An excess number of basophils has also been reported when persistently high triglyceride levels were also present.

Why Might My Dog Or Cat’s Basophil Count Be Low? (=basopenia)

It is not unusual for a veterinary laboratory to report that no basophils were present in your dog or cat’s blood sample. In humans low basophil counts are associated with sudden, severe allergic reactions (anaphylaxis), severe bacterial infections, hyperthyroidism, prolonged corticosteroid administration and stress. No information exists for dogs or cats.