Why Is My Dog Or Cat’s Band Neutrophil Count High Or Low? 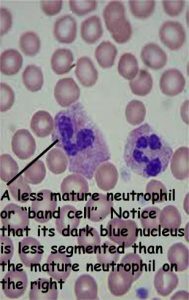 Why Is My Dog Or Cat’s Band Neutrophil Count High Or Low?

You can read about what your pet’s neutrophils do in more detail: here. All blood neutrophils are produced in your dog and cat’s bone marrow and then released to circulate in the pet’s blood. The neutrophil’s  job there is to police the body searching for invading organisms and to destroy them when encountered.

The main messenger chemical (= chemockine ) that stimulates your dog or cat’s bone marrow stem cells to increases their production of neutrophils is interleukin-8. And the greater that stimulation, the more likely the marrow cells are to release the neutrophils when they are still a bit immature.  One can recognize an immature neutrophil by the shape of its nucleus. Fully matured neutrophils have a segmented nucleus – like links in a sausage chain. Slightly immature neutrophils have a non-segmented or less segmented and elongated, band-shaped nucleus.  Hence their name, band cells. The less the segmentation, the more immature they are.

When a blood sample from your pet is removed for a CBC  /WBC count analysis, and it is reported back from the laboratory that high band cell numbers were observed, your veterinarian might refer to that as a “shift to the left” or “Schilling shift”. That  means more young neutrophils (band cells) were present than normal. If the total neutrophil count is still normal or high and older segmented neutrophils still outnumber the young band cells, it is a “regenerative shift left” (a good sign). If the total number of neutrophils has dropped and young band cells still outnumber older segmented neutrophils, that is a “degenerative shift left” (a bad sign). It means that your pet’s bone marrow is running out of replacement neutrophils.

Why Your Dog And Cat’s Band Cell (Band Neutrophil) Count Might Be High:

Severe stress of any kind that causes the release of corticosteroids (cortisol) from your pet’s adrenal glands can temporarily elevate the dog or cat’s neutrophil and band cell count.

A tumor of the bone marrow cells that generate neutrophils is a much rarer but possible cause.

The health problems that reduce band cell numbers are the same ones that reduce total neutrophil numbers. Read about them  on my webpage about neutrophils .

The underlying cause of high band neutrophil numbers is usually easier for your veterinarian to discover than the cause of low band cell numbers. Those pets often run a fever. The history you give and your veterinarians examination usually hint or point to the portion or portions of the body responsible for the neutrophil rise. Cough, diarrhea, abscesses, localized pain or swelling, abnormal liver or kidney tests all help determine the cause.

Discovering the underlying cause of a low band cell and neutrophil count can be considerably more difficult. It often requires a bone marrow sample , ME ratio and a veterinary pathologist to review the findings. Even when the cause of bone marrow failure is successfully determined, treatment options are more limited than they are for higher-than-normal neutrophil situations.