Why Are There Struvite Crystals In My Dog Or Cat’s Urine? 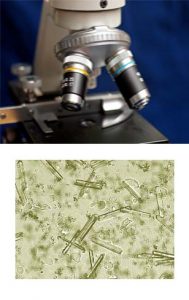 Why Are There Struvite Crystals In My Dog Or Cat’s Urine?

This entry in many respects duplicates the one of mine on crystals seen in your pet’s urine. Read that one here.

At one time, struvite crystals (aka magnesium ammonium phosphate or triple phosphate) formed the majority of urinary tract stones (calculi) occurring in dogs and cats. They were particularly dangerous when they formed the sandy, gritty material that plugged up the penis of male cats (FUS ) – generally those that were neutered and overweight. Struvite also frequently formed large bladders stones that caused urgency and pain in female dogs. Struvite-based urinary tract stones are still quite common, but oxalate-based  stones now account for at least as many calculi/stone cases.

Struvite crystals tend to form when your pet’s urine is not acidic enough and when it is overly concentrated as a result of the dog or cat not drinking enough water throughout the day. Although unproven, many veterinarians associate the feeding of dry dog and cats chows with the chronic dehydration and concentrated urine conducive to urinary tract stone formation. Certain bacteria also split urine urea into ammonia. When they are present, that makes the urine basic (alkaline) enough for struvite crystals to form.

Reason Why Your Cat or Dog Might Form Struvite Crystals In Its Urine:

The fact that your veterinarian observes fine struvite crystals in your dog’s urine is not necessarily a sign of disease or that problems will occur in the future. I find them considerably more worrisome when they are seen in the fresh urine of cats. The wider urethra of female cats prevents life-threatening urine obstruction. When the problem occurs in male cats and they can no longer urinate , it is life threatening.

Not enough liquids consumed during the day is probably the most common cause for those benign (not important) struvite crystals be observed in your dog or cat ’s urine. They are even more likely to be seen when the urine sample sat too long before being examined – particularly when it sat at room temperature.

A basic  pH urine is conducive (encourages) to struvite crystal formation. That would be urine with a pH greater than 7. As I mentioned, dogs and cats with basic urine generally have a urinary tract infection with bacteria that split urine urea (urease-positive bacteria) into more basic, ammonia.

It might also be possible for pets forced to eat a bizarre vegan-type diets that supply only plant proteins to produce basic urine. That might be more likely to precipitate struvite crystals. Little nutritional research goes into the formulation of those diets and their long term effect on pet health. Relying primarily on soy protein and beans, rather than meat, to meet a carnivore’s protein requirements is never a good idea.

Compete urinalysis, CBC/ WBC and blood chemistry panel , urine bacterial culture (and antibiotic sensitivity of any bacteria recovered), review of your dog and cat’s diet and adequacy of your pet’s liquids consumed during the day. If urinary urgency or difficulties are already present, bladder/kidney x-rays and perhaps more sophisticated contrast studies.