Why Are My Dog Or Cat’s Vitamin D3 Levels Too Low Or Too High? 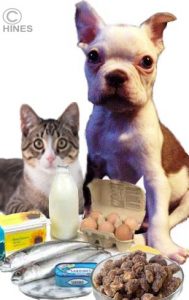 Why Are My Dog Or Cat’s Vitamin D3 Levels Too Low Or Too High?

Vitamin D, in its D3 form, is one of the fat soluble vitamins that your cat or dog obtains from its diet. You and I can do fine with dietary sources of vitamin D2 (ergosterol), its “pro” form ergocalciferol or we can simply produce vitamin D from cholesterol-like compounds in our skin (7-dehydrocholesterol) found in ingredients like linseed oil, cottonseed oil and wheat when we are exposed to unfiltered sunlight. (ref) But most carnivores, including dogs and cats, have lost that ability. Pet birds share our human ability to convert D2 to D3 – but only when they are out of doors or exposed to natural sunshine through unfiltered window glass. Your dog or cat would normally obtain adequate amounts of D3 from the liver, egg, fish and other meat ingredients in its diet. Pet food manufacturers fortify their foods with extra vitamin D3 – just to make sure.

Adequate vitamin D3 is essential to maintain proper levels of calcium and phosphorus in your cat and dog’s blood. That in turn, keeps your pet’s bones properly mineralized and strong. Proper vitamin D levels are particularly important in growing puppies and kittens. If not enough vitamin D3 and/or calcium is present, in their diets, it can result in rickets. Proper calcium metabolism in your pet is not only dependent on its vitamin D3 stores. It also depends on  normally-functioning parathyroid glands and kidneys. (ref) Optimal amounts of circulating calcium are essential for normal nerve function, muscle contraction and many other of your dog and cat’s vital body processes.

How much vitamin D3 your pet dog and cat require is quite dependent on the balance between calcium and phosphorus in its diet. Things function best when there is approximately 1.2 parts calcium to 1 part phosphorus in the diet your pet receives. Growing puppies and kittens require more vitamin D3 in their diet than adults.

Too much vitamin D3 in your dog or cat’s diet is just as bad as too little. When a pet receives too much vitamin D3 in its diet (hypervitaminosis D), tissues throughout its body are injured because the excess calcium in circulation deposits in the wrong places (metastatic calcification).

Abnormally high or low vitamin D3 consumption is unlikely to be immediately obvious in your dog or cat. That is because vitamin D is stored for a long time in body fat – its natural reservoir –  about half of the D3 consumed is still in their fat after 2 months.

Why Might My Pet’s Vitamin D3 Levels Be Too Low (Hypovitaminosis D) ?

Poorly thought out, homemade diets are the most common cause. Well-meaning pet owners might easily conclude that their dog or cat will do just fine on the foods that they themselves thrive on. That is particularly true if the owners themselves limit their consumption of meat and expect their pets to do the same. (ref) Vitamin D3 is not abundant in grain, vegetables, nuts or fruit – and your dog or cat can’t simply cook some vitamin D up (synthesize it) with a walk in the sunshine like you and I can.

To compound that potential problem, the amount of vitamin D3 in lean red meat is also quite low. Liver, egg yolks and fish oils are a much better source. Red meat has a calcium to phosphorus ratio that is the reverse to what dogs and cats should be consuming. In the wild, their ancestors consumed enough bone tissue from their prey to prevent that. That unhealthy, reversed ratio of calcium to phosphorus when only red meat or fish tissue is consumed makes the effects of insufficient vitamin D3 in home made diets even worse. Although no one I am aware of has published controlled studies, during puppy and kitten development, adequate vitamin D3 intake is certainly important. (ref) As time goes by, consuming too little calcium in relation to phosphorus affects dental health as well. (ref) More recently, studies seem to indicate that adequate amounts of vitamin D3 are also important for proper immune system function. (ref)

Reasons Your Dog Or Cat’s Vitamin D3 Levels Might Be Too High (Hypervitaminosis D):

Accidental consumption of certain rat or mouse poisons is or was the most common cause of excessively high vitamin D3 blood levels. That occurs more commonly in dogs than in cats. For a time, vitamin D3 rat and mouse poisons were the most common types used. Over time, that has changed. First poisons containing compounds that promoted fatal bleeding became the most common sold (coumarin, dicoumarol, warfarin, Coumadin®,etc.). Then those were replaced at governmental insistence (child safety) by rodent poisons containing bromethalin which was thought by the FDA to be less of a danger to children. However veterinarians know of no known antidote for  bromethalin . So as of  2019, some common brands like d-CON® again contain toxic levels of vitamin D3.

The next most common cause of vitamin D3 overdose is giving your dog or cat too much vitamin supplement or fish oils containing vitamin D (such as cod liver oil).

The next most common cause is probably pet food manufacturing errors that resulted in too much vitamin premix being added to a batch of dog or cat food. (ref)

Certain plants can perhaps also contain unsafe amounts of vitamin D3. (ref) But it is unknown if pets that accidentally ate them could end up with vitamin D overdose. Accidental consumption by a pet of certain human anti-psoriasis medications (eg Dovonex®/calcipotriol) might also be a possible cause.

CBC /WBC and blood chemistry values , including calcium and phosphorous levels as an indication of rodent bait poisoning, PTH levels to rule out secondary hyperparathyroidism.

Finding normal blood calcium levels in your dog or cat subsequent to its exposure to excessive amounts of vitamin D3 are not an absolute guarantee that dangerous metastatic calcification will not occur at a later date. I would repeat those tests twice over a four month period – but that is something for your veterinarian to decide.