Why Are My Dog or Cat’s Red Blood Cell Numbers Lower or Higher Than Normal? 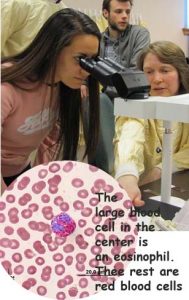 Why Are My Dog or Cat’s Red Blood Cell Numbers Lower or Higher Than Normal?

Reasons Your Dog or Cat’s Red Blood Cell Count Might Be Low:

Read over my entries for PCV and hemoglobin as well as the causes of low RBC counts (= anemia). Read another article about anemia in dogs and cats here ; and higher than normal RBC counts (= polycythemia).

The most common signs pet owners might notice when RBC counts are low and anemia is present are a lack of energy, pale gums and an increased respiratory rate.

Reasons Your Dog And Cat’s Red Blood Cell Count Might Be Higher Than Normal:

There are several diseases that can also elevate your pet’s red blood cell numbers. One is a failing heart. Low blood oxygen levels due to heart failure sometimes stimulate the pet’s bodies to produce more red blood cells than they otherwise would produce. In those cases, RBC numbers increase in response to a hormone, erythropoetin (aka EPO) produced by the pet’s kidneys. Both kidney and lung disease have also been known to elevate blood erythropoetin levels resulting in abnormally high red blood cell numbers. Your pet’s red blood cells are produced in its bone marrow. Certain tumors of the stem cells that produce red blood cells in your dog or cat’s bone marrow can also cause its RBC numbers to be higher than normal.

What would be a normal red blood cell count in most dogs is abnormally low in greyhounds (and possibly other sight hounds [ref] ). Whereas 5.5-8.5 million RBCs/mm3 is normal for most dogs, 7.5-9 million is normal for greyhounds)