Why Are My Dog And Cat’s TSH Test Results High or Low? 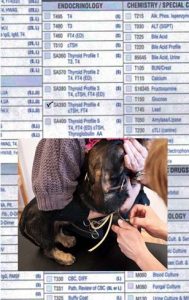 Why Are My Dog And Cat’s TSH Test Results High or Low?

This is another test your veterinarian might order when he or she is uncertain if your dog or cat has thyroid gland problems.

Perhaps your pet’s T-4 results were a borderline number or perhaps it was only slightly high or low and your veterinarian is still uncertain if a true thyroid problem exists. You see, your pet’s T3 and T4 levels can be low due to many non-thyroid health issues.

The TSH test is part of a group of tests that examine your pet’s thyroid gland function in detail. They are called a thyroid panel. If the costs of lots of lab tests are a concern, having your vet simply run a free T4 and a TSH are good ways to begin.

TSH (thyrotropin) is produced in your dog or cat’s pituitary gland, a tiny bleb on the bottom of its brain that produces an amazing array of hormones that regulate the entire body.

The area just above your pet’s pituitary gland (its hypothalamus ) is continually measuring the amount of thyroid hormones (T3 & T4) in your pet’s circulation. When those levels drop too low, more TSH is released to stimulate its thyroid gland to produce more T4. So high TSH levels suggest that not enough thyroid hormone is present. A low level of TSH suggests that enough, or more than enough, thyroid hormone is being produced. However the TSH test in dogs and cats is not as accurate in sorting out thyroid gland problems as it is in humans. The reasons why remain unclear.

A TSH assay is included as part of the OFA screening of potential breeding dogs for any genetic tendency toward hypothyroidism. So far, setters, spaniels and Shetland sheepdogs have the highest tendency toward that defect.

Reasons Why Your Dog or Cat’s TSH Level Might Be High:

Cats that have had radioactive iodine treatment for hyperthyroidism and requiring thyroid supplement can have elevated TSH levels thereafter.

Reasons Why Your Dog or Cat’s TSH Level Might Be Low:

Hyperthyroid cats will generally have low levels of TSH. Hyperthyroidism is quite rare in dogs. But should a dog suffer from an overactive thyroid gland, it could be expected to have low TSH levels as well.

Old cats, showing none of the symptoms of hyperthyroidism, typically have lower TSH levels as well. Veterinarians do not know if that indicates that those older cats with low TSH levels are at a higher risk of developing hyperthyroidism than elderly cats that have normal TSH levels.

The TSH test can also be an aid in monitoring if forgetful clients have been regularly giving their pets the thyroid supplements they were prescribed. Also, many dogs and cats spit pills out without the owners knowledge. Occasionally, more thyroid medication is given than was recommended. If any of those event occurred, an unanticipated high or low TSH level should indicate it.