Why Are My Dog And Cat’s Blood And Urine Uric Acid Levels Abnormally High? 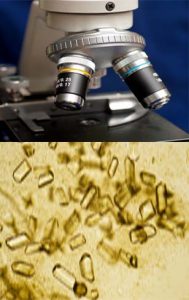 Why Are My Dog And Cat’s Blood And Urine Uric Acid Levels Abnormally High?

Uric acid is a breakdown product of purines , compounds that are found in all cells of the body. Organ meats your dog or cat consumes, like liver and kidney, are very rich in purines. Plant ingredients in your pet’s diet contain considerably smaller amounts.

A potential problem is that uric acid is not very soluble in the water contained in blood or urine. When uric acid levels get to high, the compound can fall out of solution and forms crystals. When that occurs in dogs, humans or birds, they can develop health issues. In humans and birds, the result is the formation of uric acid gout crystals  in and surrounding joints.

Dogs and cats do not develop gout the way people birds and reptiles do. Instead of joint arthritis, several breeds of dogs (dalmatians, English bulldogs, black Russian terriers) occasionally have inherited defective uric acid metabolism (their livers can’t convert uric acid to more soluble allantoin). In those animals, that results in an excessive blood and urine uric acid (hyperuricosuria) level which can lead to uric acid stone (calculi) forming in their kidneys and bladder (urolithiasis). These stones occasionally occur in other breeds that are suffering from  liver shunt  problems. When these stones/calculi block the free flow of urine, they lead to medical emergencies. When they are present but still allow urination, over time they can still produce abnormal pressure due to flow resistance. That can slowly destroy the kidneys. Both situations are quite painful. Blood in the urine is a common pet owner observation.

What Might Prompt My Veterinarian To Check My Dog Or Cat’s Blood And Urine Uric Acid Levels?

Your veterinarian might have submitted a kidney or bladder stone to a laboratory and found that it was composed of urates (uric acid).

The vet might be trying to judge the effectiveness of the treatment he/she provided to prevent a reoccurrence of urate stones (allopurinol medication and special low-purine diets).

About 6% of the urinary tract stones that occur in cats are said to contain uric acid (as urate crystals). We do not really know why that occurred; but in a few of those cats, liver circulatory problems (portosystemic shunts) or genetically-cause kidney defects appear to be the root cause. Some theorize that a diet high in purines (such as anchovies, sardines, liver, kidney and other organ meats) might be involved. Whatever the cause, cats that do not drink adequately and who exist primarily on dry diets are probably at a higher risk because their urine is more concentrated and stones and crystals are more likely to form in a concentrated solution than a dilute one.

Because uric acid readily leaves solution and falls to the bottom of a urine specimen as crystals, care must be taken that the urine sample be fresh, well mixed prior to testing and not overly chilled during its storage.

Human physicians have noticed that high levels of uric acid in blood and urine do not predict the likelihood of gout developing as well as they had hoped they would. Some people with very high uric acid levels never develop gout and some people with somewhat lower levels do. So in humans at least, other factors must be involved. If that also pertains to dogs and cats developing urate urinary tract stones is something that veterinarians do not know.