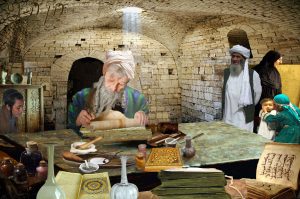 Back to parent rabies article

From the Tractatus De Venemis  (A Discussion of Poisons) The year 595 in the ancient Muslim world corresponds to approximately July, 1198 AD:

“It was in the month of Ramadhan in the year 595 that His Highness addressed me, Moses, his humble servant and said: “It occurred to me yesterday that someone might be bitten by a poisonous animal and the poison would spread throughout his body. . . and he would die . . . therefore, I order you, Ibin Musa, to write a short and concise manual of first aid for the bitten person.” So, in compliance with the command and wish of your highness, I set out to write the following treatise and entitled it Treatise to the Honored One!

When someone is bitten, immediate care should be taken to tie the spot above the wound as fast as possible to prevent the poison from spreading throughout the body; in the meantime, another person should make cuts with a black lancet directly above the wound, suck vigorously with his mouth and spit out. Before doing that, it is advisable to disinfect the mouth with olive oil or with spirit in oil. . . . Care should be taken that the sucking person has no wound in his mouth or rotten teeth . . . should there be no man available to do the sucking, cupping-glasses should be applied, with or without fire; the heated ones have a much better effect because they combine the advantages of sucking and cauterizing at the same time. . . . Then apply the Great Theriac.

An old well informed doctor told me that he saw a spinning factory (weaver) boy who was bitten by a dog; it was not apparent at the time that the bite was from a mad dog and so the physicians pronounced the dog healthy and allowed the wound to close after a month or so. The boy recovered and for a long time did his job just like any other healthy person. But finally he became fearful and died . . . I learned that one should leave the site of the bite open and not close it under any circumstances before 40 days have elapsed….. When in doubt if a dog is rabid or not, proceed as if the dog was mad..” ( trans Rosner, Munter & mine)

Moses Maimonides was the most famous and perceptive of the medieval physician. His 10 medical works emphasized preventive medicine and the need to treatment the whole of the ill patient. He was a devoutly religious, but not a superstitious man – one of the greatest philosophers, theologians and astronomers of all time.

“From [the biblical] Moses to Moses [Maimonides] there never arose a man like Moses,” and none has since. ( Fred Rosner MD, 1965 )