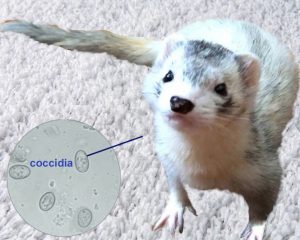 Parasite Threats To Your Ferret

Read about ear mites on your ferret here

Read about heartworms in your ferret here

Read about fleas on your ferret here

If you purchased your pet ferret from a large, reputable breeder. If you do not feed them uncooked meat. If you do not house or expose your ferret to the out-of-doors. Then intestinal and other parasites are unlikely to become a problem for your ferret.

Fleas, ear mites and heartworms are a different story. Your other pets can bring those unwanted guests. There are two products that can prevent fleas Revolution (selamectin) and Advantage Plus. (ref1,  ref2 , ref3)

In the wild, ferrets (polecats) harbor a large variety of internal parasites. Domestic ferrets are most likely susceptible to all of them. However domestication has its benefits and the risks of pet ferrets being exposed to the majority of those recorded wild ferret parasites is quite low. That risk increases when ferrets are housed out-of-doors or fed raw diets.

Eimeria furonis is a coccidia – a microscopic parasite that invades the cells that line your ferret’s intestinal tract. It is the most common internal parasite of domestic ferrets. Once these parasites have invaded a breeding colony or large gathering of ferrets, they are very difficult (if not impossible) to completely eliminate.

What Will This Parasite Do To My Ferret?

In most causes it will cause no symptoms. Your ferret will react to the parasites presence by developing antibodies against them and keep their numbers under control. However, now and then, the ferret will still pass a few coccidia “eggs” (oocysts)

These oocytes are very tough. They are resistant to drying and persist in the environment. Common disinfectants have little effect on them. The best method to kill the infective eggs of coccidia is heat and drying. But even then, the organisms tend to survive in cracks, nooks porous objects. (ref1, ref2 )

Coccidia only become a problem when ferrets are suddenly exposed to large numbers or coccidia through stool contamination from other ferrets or when stress, age or concurrent disease break down their immunity to coccidia.

The best-described outbreaks of coccidiosis in ferrets occurred between 2005 and 2009 in a ferret shelter in Michigan housing 42 ferrets; at the facilities of a ferret breeder/ in Pennsylvania with 63 ferrets and at a ferret shelter in the same state with 62 ferrets. The chief sign in all three locations was the sudden occurrence of bloody diarrhea. When ferrets died of the disease, it was due to dehydration and blood loss. A drug traditionally used to treat coccidiosis in poultry and livestock was “moderately” effective in treating these ferrets. It never entirely eliminates these parasites in other species either. For individual ferrets, intravenous and subcutaneous fluids would probably have been more successful. Read about those outbreaks in detail here and here.

Occasionally, E. furonis appears to inhabit the ferret’s bile ducts and gallbladder in higher numbers than it does the intestine. In those cases, diarrhea is not the primary sign. Instead, laboratory liver tests show evidence of hepatitis and bile duct obstruction (ref)

Some online sources and veterinary publications suggest yearly stool sample examinations by your veterinarian to detect the presence of E. furonis. (ref) There is no harm in having your veterinarian run those routine stool sample examinations. However the chances of him/her encountering the eggs (oocysts) of coccidia in an apparently-health pet ferret’s stool are poor. The coccidia present in carrier ferrets and even those sickened by coccidiosis shed their telltale eggs very intermittently or not at all. When healthy ferrets do shed coccidia eggs, it is generally under conditions of stress when their immune system becomes weak. Finding a few coccidia eggs in a ferret like that is not reason enough to blame a  ferret health issues on coccidiosis. But several stool examinations are a very wise procedure to perform whenever ferrets are housed in large groups. That is because it is quite easy to mistake coccidiosis for inflammatory bowel disease or coronavirus.

There have been a lot of coccidia other than Eimeria furonis reported in wild ferrets in Europe. Those were often found when the intestines of a wild ferret, killed by an automobile, was microscopically examines. Some of those were probably Eimeria vison, a coccidia most common in mink and weasels. (ref)

Ferrets, like all mammals, birds and us humans are susceptible to infection with a particular coccidia parasite called Toxoplasma gondii. This parasite only completes its life cycle and produces infective eggs (oocysts) in cats, its “definitive” host. You can read my article about this parasite in cats here.  The only likely sources of this parasite to your indoor ferret is the consumption of raw meat or access to the litter box of an infected in-and-out house cat. Outdoor ferrets are a considerably greater risk of exposure and hunting ferrets are at the most risk. In the vast majority of cases, these parasites just encyst in the muscles and nervous tissue of the ferret causing no disease. In a few cases symptoms related to nervous system involvement or pneumonia occur. When Toxoplasma causes these symptoms across the animal kingdom, it is generally due to a weak or suppressed immune system. (ref)

As I mentioned, the vast majority of animals and people who are exposed to Toxoplasma remain healthy and show no symptoms. (ref)

Like coccidia, giardia is a microscopic protozoa. The primary sign of giardia infection are watery diarrhea, loss of appetite and perhaps vomiting. There is rarely if ever blood in the diarrhea. Giardia parasite cysts and trophozoites ( individual adult organisms) passed out in the feces. Although the trophozoites do not live long outside of the intestine, the cysts are very resistant to drying and disinfectants like bleach. (ref)

When giardia causes diarrhea in dogs, cats and ferrets, it is generally in a stressed animal housed in unsanitary conditions. The parasite “blooms” whenever conditions in the intestinal tract are abnormal. So just finding them in a fecal specimen does not mean they are the primary disease. A 2011 report from Europe looking for the parasite between 2002-2011 found 2.9 –13.3% of ferrets carrying giardia depending on the particular year the examination was conducted (seems to be worse in wet years). (ref1, ref2)

Subcutaneous (under the skin) Nematodes

When I saw a large number of pet ferrets in San Antonio, Texas, several came to me with draining lesions on their nape and torso. When I probed these area I was able to remove parasites that resembled heartworms. Sending them to Texas A&M University, they were identified as cousins of the dog heartworm, Filaria taxideae. All of these ferrets were being kept in outdoor hutches.. Once removed, the wounds healed well. Read about that parasite here

I am told that this worm can cause a heartworm antigen test (the Snap test) to give a false-positive result.

I have also seen a few cases of what we in Texas call warbles occurring in ferrets. Again, the cases were in ferrets that were housed outside. These parasites are called cuterebra or botflies because the adult parasite is a fly. Their larva or “bots” dwell just under the skin. The larva/grub produces a small ulcer through which it breathes.

A variety of intestinal worms have been reported in road-killed free-ranging ferrets in Europe. So I would not discount the possibility that a variety of dog and cat intestinal parasites might survive in domestic ferrets. I have never seen a case and know of no veterinarians that have. But you can read a study that discusses their presence in wild ferrets here and here

Sarcocystis, another protozoa, occasionally cases inflamed muscles in stressed and immunosuppressed animals and humans that consume raw meat. Most of the time, no symptoms occur and the parasite just encysts in a dormant state in the new host’s muscles. One study that checked for these parasites in pet ferrets in Italy detected only one infected ferret in the 50 ferrets examined. (ref)  However, a sizable number of wild rats – a favorite food of free-ranging ferrets – are carriers of sarcocystis.

I have only encounter sarcocystis disease (sarcosporidiosis) in cockatoos at breeding facilities in Florida. In those cases, American opossums, a known shedder of sarcocystis were implicated. (ref)  Equine vets see sarcocystis related disease in horses.

One case of this parasite infecting a European ferret was reported. (ref)