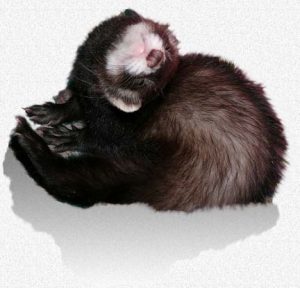 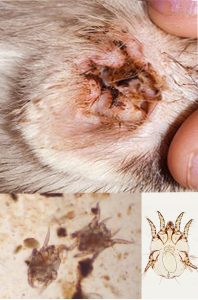 Why Is My Ferret Scratching It’s Ears?

Ear Problems In Your Ferret

If your ferret has been scratching at it’s ear and shaking its head, or you are just seeing brownish or blackish material at the entrance of its ear canals, your ferret may have ear mites and an ear infection (otitis).

It is conceivable that a ferret might have ear canal irritation do to other causes, baths that left the ear canals damp, a thin object that made its way up the ear canal, etc. But 99% of the cases I have seen were initially caused by ear mites. Sometimes the infection remains after the mites are gone – either treated sometime in the past or when exudates in the ear canal make it inhospitable to their continued presence. The same ear mite, Otodectes cynotis (the one in the diagram above), that affects dogs and cats is also the one that infects ferrets. Although it can happen, most ferrets don’t get ear mites from other ferrets or non-ferret pets in your household. They usually get them from their mothers shortly after birth. That can be avoided if you purchase your pets from reputable breeders.

Ear mites live and breed in the external ear canals causing chronic irritation that leads to secondary bacterial and yeast infections. Ferrets with ear mites and ear infections frequent scratch their ears with their rear legs and shake their heads. Looking through an otoscope, it is clear that the mites are constantly on the move within the canal which must be terribly irritating. These mites feed on the tissue debris and inflammatory fluids caused by their activity. The ears of ferrets with ear mites are often scratched and reddened.

Ear mites are close to microscopic in size. They look like cream-colored miniature spiders or crabs. I generally spot them through my otoscope when they move. If only a few are present, it takes patience to see one. If gunky debris are so thick that they obscures the mites, I generally find them or their eggs in the material produced by an ear flush. If left untreated, ear mites can lead to rupture of the ear drums, as well as balance and hearing problems. If you deal a lot with ferrets, kittens or puppies, you can buy an otoscope at a reasonable price on Ebay. Whenever a ferret comes in for a general health exam, if I am at all suspicious of ear issues, I place a drop of mineral oil laced with permethrin deep within their ears. An ear massage keeps them from slinging it back out. I don’t suggest you prepare concoctions of insecticide-laces ear mite formulas yourself unless you have formal training to do so. At too high a concentration, all insecticides are toxic.

A ferret reaction to the presence of ear mite varies. Many ferrets do not seem bothered by a few mites while others itch intensely. Perhaps individual pets vary in their sensitivity to mite saliva or in the ability of their immune system to keep mite numbers under control. That is the case with demodectic mange mites dogs sarcoptic mites in all animals. The irritation ear mites cause in the ferret’s ears stimulate wax secretion from glands within the ear canal.

The color and consistency of that wax changes when mites are present and becomes almost black in color and thick in consistency. Those ears need complicated care. When I am sure the ear drums are not ruptured and that their are no balance problems, head tilt, circling or other signs of a middle ear infection I fill the ear canal with ear cleaning solution and gently massage the base of the ear. Periodically, I cover the ferret with a towel and let him sling the solution out, repeating that again and again until no more debriefs appear. Alternatively, one can do it with a rubber pediatric bulb syringe. I use an animal blow dryer to dry the pinna (outer ear) and canals, then place a few drops of mineral oil with permethrin massaged downward into the ear canal. Sometimes inflammation is so severe that it is best to pack the ear with a small amount of Animax®-type ointment. Those cases generally go home with some oral antibiotic as well.

I do not suggest you attempt it, but it is possible to spin long staple (fiber length) cotton into a tiny cone and spin it deep into the ear canal without the dangers of Q-tips. That is considerably less likely to damage the ear drum or cause bleeding than tomcat urinary catheters used for ear irrigation. Leave that to a veterinarian who specializes in ferrets and exotic pets. He/she probably has their own preferred techniques.

When ear mite infestations are allowed to continue for long periods, the consistence and color of the ear wax can be permanently changed. Inflamed ear canals also narrow. Both those conditions are not fully reversible. If one ferret in your household is positive for ear mites, treat them all.

How Do I Get Rid Of These Mites In The Safest Way?

Although mineral oil in itself will kill ear mites, the most effective products I know of are Revolution® (selamectin), a topical Zoetis product that was not FDA-approved for ferrets as of this writing. Nevertheless it is often used to kill fleas and ear mites on ferrets and to prevent heartworms. (ref1, ref2 )  In 2020, a generic selamectin equivalent, Selarid®, was also approved by the FDA for use in dogs. Advantage Plus® (aka Advocate®) is also effective. According to its manufacturer, Bayer, it is approved by the US  FDA for use on ferrets. But I have never been able to locate that approval letter on the FDA site (ref) The only problem I have encountered using Revolution® in ferrets is a transient rash and/or hair loss at the sites of application on their back. I see that in dogs and cats as well. It can usually be avoided by placing just the smallest drop of the product at many locations on the pet’s back and flanks until the full correct dose has been applied (not on the hair – part the hair, place it on the skin).