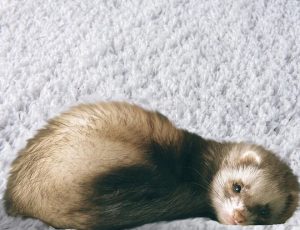 Liver Disease & Hepatitis In Your Ferret

Hepatitis and liver disease are not commonly mentioned as diseases of pet ferrets. Veterinarians in private practice rarely diagnose it. But when they do a blood enzyme profile on your ferret and find that one enzyme, ALT, is abnormally high, your ferret has liver issues. The pet’s liver may or may not be the underlying problem, but its liver is being negatively affected.

Are There Other Test That Might Suggest A Liver Problem?

An ultrasound examination of your ferret might note that the ferret’s liver was hyperechoic (increased echogenicity = more bright white=more dense).

Perhaps. One of the duties of your ferret’s liver is to process cholesterol obtained from dietary fat as well as manufacture an additional amount of cholesterol when required. We do not know how much of the cholesterol in your ferrets body comes from one or the other source. Ferrets bred to develop cystic fibrosis and hepatitis were found to have abnormally low blood cholesterol levels. It is unclear if that was due to their liver issues or simply that they were not interested in eating. (ref)

When your veterinarian palpates (probes) your ferrets tummy with his/her hands, your vet might notice that the ferret’s liver is larger than normal. The livers of dogs, cats and ferrets should not be palpable farther to the rear than their last rib.

I mentioned that your ferret’s liver is the clearing house for many important metabolic functions. It relies on a steady stream of nutrients and signaling compounds making what’s needed, altering and excreting what isn’t needed and excreting those compounds through the bile. (ref)

Just the fact that your ferret has little interest in eating is sufficient to affect its liver. Read more about that farther down under hepatic lipidosis. IBD is an inflammatory disease. In more serious cases, that inflammation is not limited to the intestinal lining. The same situation occurs in cats with IBD. (ref)

Cystic fibrosis is usually associated with lung function. But in laboratory-raised ferrets bred to be prone to cystic fibrosis, serious liver disease occurs as well. (ref)

You can read my article on influenza in ferrets here. If you do you will learn that although influenza can spread between ferrets in close contact, it is usually contracted from a human sneeze or cough. And just like in humans, the prevalent flu strain of the year can be quite severe or mild. Ferrets are the animal of choice when evaluating flu strains (=clades=subtypes) for severity and developing vaccines to counter particularly severe flu subtypes. So we know quite a bit about how ferrets are affected. Certain flu strains, like the Vietnam H5N1  variety that we think jumped from birds to mammals is particularly severe when ferrets catch it. Among the organs that it effects outside of the lungs is the liver. (ref) The 2016/2017 strain affected ferrets livers as well. (ref1, ref2)

When organs other than the lungs are affected by the flu, many scientists believe that is due to the release into the blood stream of pro-inflammatory cytokines – compounds that have both protective and destructive abilities. (ref) Don’t jump to giving your ferret Tamiflu. Read my article on the flu in ferrets first.

Tumors Within The Liver

The liver is also a sieve that traps things passing through it in the blood stream. As such, it occasionally traps the cancerous lymphocytes that constitute ferret lymphoma.

So liver disease and jaundice can be related to a lymphoma issue. The liver can also be the primary site where cancers form. It can be very difficult for veterinary pathologists to tell one type from another. ( ref1, ref2)

Diabetes is quite rare in ferrets – at least it is rarely diagnosed. Read about diabetes in ferrets here.    The opposite situation, too much insulin due to insulinomas is considerably more common in ferrets. When ferrets develop diabetes, their liver is sometimes involved too. (ref1, ref2)

That form of coronavirus disease is called ferret systemic coronavirus or FRSCV. It is similar to FIP in cats, which is also caused by a coronavirus. Read about FRSCV in ferrets here.

When ferrets develop FRSCV, their liver is often of the organs damaged. (ref)

Hepatic lipidosis or fatty liver disease is a common health issue in cats. Read about that disease in cats here. It also has the potential to occur any time a ferret experiences sudden weight loss. That seems to be more common when initially the ferret was overweight. A similar problem occurs in mink. (ref)

) Ferrets have a tendency to accumulate fat in their livers. (ref)

You would think that this fat would be available for a rainy day, but just like cats, ferrets appear to have great difficulty shifting from a protein-based energy source to one based on fat or carbohydrate. (ref)

Perhaps an ursodeoxycholic acid supplement would help in those situations. (ref)

I left hepatitis E to last, but it concerns me the most. There are a lot of hepatitis E virus. At one time, when humans caught hepatitis virus, many of the E variety were called “non-A – none-B” hepatitis. (ref ) Some of the E hepatitis viruses seem partial to a particular species. But some infect a wide range of species (pigs, boar, deer, mongoose, rabbit, camel, chicken, rats, ferret, bats, cutthroat trout and humans). (ref)  All are passed through fecal contamination and body fluids. When humans catch them, raw or under-cooked meat is suspected to be the most common source. In humans and animals, only a small portion of those infected ever become ill. But many continue to harbor the virus and pass it on. Those that do become ill are usually immunosuppressed or under stress.

That ferrets could be infected with hepatitis E was first discovered in the Netherlands in 2010. The ferrets tested were collected from various breeder as well as house pet ferrets. None of these ferrets appeared ill. The authors prime concern was that these ferrets might have the potential to infect their owners. But that was never established. (ref)

Between 2009 and 2013, the Japanese National Institute of Infectious Diseases in Tokyo requested fecal samples from 85 pet ferrets from ten animal hospitals scattered across Japan. They had been brought to their veterinarians for various problems, diarrhea, reluctance to eat, etc. They ranged fro 4month to 9.7 years. Seven percent were positive for hepatitis E virus. Several strains (clades) of hepatitis E were represented. One strain in particular was associated with anorexia (not eating) and an enlarged liver. They also noted that those ferrets had higher than normal levels of ALT liver enzyme in their blood – a sign of liver damage. (ref)

In 2016, the same group – now including Chinese colleagues – published another study. Here they zeroed in on a group of 63 ferrets imported to Japan from breeders in the USA in 2013. Blood and stool samples were collected shortly after they arrived. Based on their tests, 63.5% of the ferrets showed evidence of E virus exposure. Again, infection was associated with elevated ALT levels. They determined that the outcome of infection could end in three ways. Some ferrets never showed illness, some showed illness, recovered and tested negative while a smaller number that appeared to recover went on to be carriers of the virus for long periods of time. (ref) That is essential the same thing that happens in humans. (ref)They published an additional paper in 2017. You can read that article here.

Ribavirin, an antiviral medication is sometimes given to humans in an attempt to cure hepatitis E. A vaccine to protect against hepatitis E (Hecolin®) is available through 2020 only in China. (ref)

I do not know if ferret breeders in the United States have attempted to eliminate this virus from their breeding colonies and if so, what the results have been. If you know, let me know  and I will add that information. I do not know if ferrets can pass this virus to humans. I know of no reported case of that happening. But since the majority of ferrets and humans go through infections without signs of ill health, it would be difficult to know. Those people who would be most at risk are those who take immunosuppressive drugs to counteract transplant rejection, those with weakened immune systems from any cause.