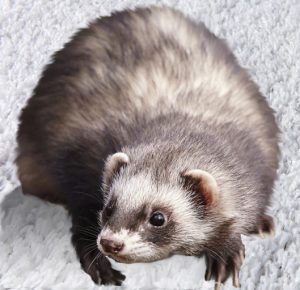 Diabetes In Your Ferret

Not many ferrets develop diabetes. (ref)  Diabetes is a situation where not enough insulin is present for their cells to utilize sugars (Type1) or when cells loose their ability to use the insulin that is present (Type2). Many more ferrets develop the opposite problem – too much insulin. That occurs when tumors (insulinomas) form in their pancreas. You can read about insulinomas in ferrets here.

Veterinarians naturally look to what is known about diabetes in humans when they address diabetes in ferrets. Because human diabetes is divided into Type 1 and Type 2, they attempt to decide if ferrets diabetes fits into one or the other category. It does not because ferret and human metabolism are quite different. Which form it is is really irrelevant when dealing with a diabetic ferret. (ref)

But when ferrets do develop diabetes, it is generally between 2 and 8 years of age. It seems that as many male as female ferrets share the problem. Most had been neutered as kits (babies); but then again, most ferrets in the USA are neutered as infants.

Are There Risk Factors That Would Make My Ferret More Likely To Develop Diabetes?

Early age neutering disrupts a ferrets entire endocrine gland system. The portions of the pancreas (islets) that produce insulin are part of that system. One theory is that the adrenal tumors formed as the result of this early-age neutering produce cortisone-like compounds that raise blood sugar levels and disrupt pancreatic and liver metabolism. (ref)    Methylprednisolone is a synthetic cortisone-like compound occasionally given to ferrets. It too has been suspected to increase the likelihood of diabetes. (ref)

Another suspected factor is diet. Ferrets are well known for accepting and enjoying foods that they would never encounter in the wild – sugary and high carbohydrate snacks. The ferret’s inherited metabolic pathways were never designed to process those treats that eventually form blood sugar. (ref)

Another suspected factor is obesity. Neutered and pampers ferrets can get quite plump. In the wild, they would burn off those calories in their search for food. Not so in the average domestic ferret’s home.

A unique form of diabetes often occurs after insulinoma tumors or pancreatic tumors are removed surgically as a cure for ferret insulinoma. It is common for those ferrets to become diabetic shortly after surgery either due to the quantity of pancreatic tissue removed or trauma to the organ during surgery.

Those post-surgical cases of diabetes usually resolve themselves over the weeks following surgery. (ref)

I do not know if ferrets as a species are particularly prone to sugar toxicity. I would not be surprised a strict carnivore like a ferret had metabolic pathways within its cells that had developed specifically for an all-meat diet just as plant-eating animals such as rabbits and cows have developed metabolic pathways to best handle the contents of their plant-based diets. But it has been discovered that ferrets (at least a subset of ferrets) are prone to complex pancreatic issues. (ref1, ref2)

What Signs Might I See If My Ferret Develops Diabetes?

The most common sign is excessive thirst. You might notice that your ferrets litter box and enclosure is wetter than normal and that you are refilling water dispensers more frequently.

The early signs of diabetes in ferrets are quite different from the signs that occur in advanced, long standing cases. Early in the disease, your ferret might eat more than it traditionally did. But later in diabetes, as the disease takes it toll, ferrets loose weight. They have less energy, sleep more and have less interest in their environment. In terminal cases, some have hind limb weakness of various degrees of severity. Muscle twitching is not uncommon.

The water intake of these advanced stage ferrets does not keep up with their body’s need so they are commonly dehydrated. Dehydration causes clay-like wrinkled skin (tenting), sunken eyes and dry gums.

It is quite common for ferrets that develop diabetes to have several coexisting health issues (comorbidities) – particularly adrenal gland disease and insulinomas but perhaps IBD as well. So many of these and other signs reported as occurring in diabetic ferrets could be due to their other health issues. (ref)

Long-term diabetic ferrets are often underweight. They might need a little coaxing and flavor enhancement to get them to eat.

Ketoacidosis – The Most Dangerous Outcome For Diabetic Ferrets

Unfortunately, many ferret owners do not realize the seriousness of their ferret’s situation until signs become severe. That is often when diabetes has advanced to ketoacidosis. Ketoacidosis or ketosis is a metabolic situation in which ferrets that can no longer process sugars and carbohydrates in their diet switch to utilizing fatty acid content of fats for energy. “Burning” fatty acids for energy releases a number of potentially toxic chemicals, ketone bodies and ketoacids. The ferret’s liver plays a primary role in this metabolic shift and the situation is made worse when ferrets have no interest in eating.

When that occurs, the pet’s blood becomes more acidic (a lower pH) and elevated levels of ketoacids and ketone bodies are likely to be detected in you ferrets blood and urine.

What Tests Might My Veterinarian Run In Diagnosing Diabetes In My Ferret ?

The key test is finding sugar in your ferret’s urine or a higher than normal of sugar in your ferrets blood. A single elevated blood sugar level in your ferret is not sufficient to diagnose diabetes. Blood sugar levels go up during times of stress. Animal hospital visits are stressful to many ferrets. Even though they appear calm, their heart rate, respiratory rate and blood pressure are often significantly higher than they are at home. Under stress, their adrenal gland release cortisone that can elevate their blood sugar level. Hyperglycemia in ferrets is any value above 400mg/dL. In diabetic ferrets that value can exceed 1,000mg/dL. (rptref)

A lot of other blood tests besides a high blood glucose level can be abnormal. BUN kidney function tests can be elevated. Cholesterol levels may be up. Blood protein can be leaking into the urine. Blood electrolytes (salts) are often abnormal. Ultrasound might detect an enlarged liver. But none of these findings are specific. They occur in ferrets in many health issues other than diabetes.

Many ferrets that have diabetes do not spill sugar into their urine – at least not continuously. But when sugar is found in your ferret’s urine, I find that more suggestive of diabetes than a single or even two elevated blood glucose levels. The paper strips used to check the pet’s urine might be positive for ketones, protein and white blood cells. I can not explain why white blood cells – generally a sign of a urinary tract infection – are sometimes present but that is sometimes the case. If they are there, your vet might suggest antibiotics.

What Treatment Options Does My Veterinarian Have To Offer?

Emergency Treatments To Stabilize The Pet

Based on your veterinarian’s assessment of the situation, these ferrets often benefit from intravenous and subcutaneous fluids containing bicarbonate to raise their blood pH to normal levels and insulin injections given in an attempt to shift the ferret’s metabolism back to utilizing blood sugar. Extra potassium might be included when blood tests show it to be low. It is extremely hard to calculate the proper insulin dose for these ferrets. There are so many variable. So most vets begin with a very low dose, wait a period of time, recheck the ferret’s blood glucose level and repeat the injection until the ferrets blood glucose level returns to normal (~80 – 100 mg/dL). They might give antibiotics. Veterinarians are prone to do that in crisis situations. (ref)

Your veterinarian is most likely going to recommend that you purchase a fingertip blood glucose meter (eg Accu-Chek™). Without regular ear pin pricks at home to obtain a drop of blood, it will be very hard to determine the best insulin injection dose, how frequently the ferret needs it, and which brand of insulin works best to keep the pet’s insulin level as close to normal as possible. Novolin® has been used successfully so has porcine lente insulin (Caninsulin®, Vetsulin®). One report found long acting insulin glargine (Lantus®) acceptable. (rptref)

Picking the proper formulation and dose is considerably more challenging than for cats which in themselves are much more difficult to stabilize than humans. We do the best we can. At home, you need to monitor your ferret closely for signs of hypoglycemia – at least until the best insulin injection program for your ferret has been determined. That can take several weeks.

If your ferret is not consuming an all-meat diet, suggesting one is one of my first thought. Don’t confuse your nutritional needs with your ferret’s nutritional needs. Some vets place diabetic ferrets on dry kibble marketed for diabetic cats (eg Purina’s OM Overweight Management® Feline). Just after an insulin injection is the best time to offer it.

Once your ferret is stable its time to begin a very slow diet for overweight ferrets. Purchase a scale. Share your diary weight entries with your veterinarian.

I mentioned that it is very common for diabetic ferrets to have other significant health issues. Those need to be dealt with if the treatment of diabetes is to be successful. (rptref)

If your ferrets liver enzymes remain elevated, there may be a place for an ursodeoxycholic acid supplement and antacid in its treatment plan as hepatic issues (hepatic lipidosis) are known to sometimes accompany diabetes in ferrets. (ref)