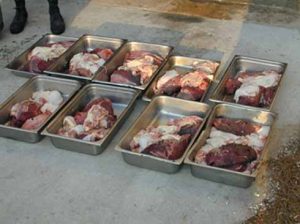 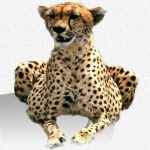 Big cats are not unique in their nutritional requirements – but those requirements can be difficult to meet in captivity. My suggestions are based on my experience with circus and zoo animals and those kept as “unusual” pets in Texas and Florida. I never recommend them as pets; but I feel that they are entitled to good veterinary care no mater what their circumstance. The freshness and quality of food products differ greatly from one place in the World to another. So my suggestions may not apply to the food sources in the area where you live. You are always safest if you locate a facility near you with a successful nutritional plan and copy it precisely.

Big cats require diets very high in protein and fat – considerably higher than that of other large carnivores or domestic carnivores.

It is always safest to purchase a vitamin/mineral supplement ready-made from a reputable firm that has a nutritionist on staff when you live in a part of the World where they are available and you can afford them. Many are on the market. This is only one of many I have used in the past:

These large cats – like their small domestic housecat cousins and unlike you and I – have also lost their ability to convert pro-vitamin A carotenoids such as beta carotene into the active Vitamin A or retinol.

Arachadonic acid, a fatty acid derivative, found in the membranes of all body cells, is also essential in the diet of large cats.

If big cats do not receive sufficient amounts of the amino acid, taurine, in their diet they will loose their vision and have a short life-span. The lack of taurine, leads to vision problems (central retinal degeneration), heart failure (acute cardiomyopathy), immune system dysfunction and blood clotting disorders. This ingredient is deficient in the stale meat many facilities are tempted to feed.

Adequate amounts of the B-vitamin, niacin or nicotinic acid, is also very important in the diets of large cats. Niacin is necessary for many aspects of big cat health, growth, and reproduction.

Big cats are also quite sensitive to arginine, methionine and cystine deficiencies. None of these deficiencies occur in the wild, when large cats eat fresh, whole prey animals. But they often do occur in captivity when the cats are fed unfortified meat and meat byproduct. This is because meat procured for zoo animals is usually meat that has been diverted from human consumption because it has partially spoiled. Meat that is not bright red in color should not be fed regardless of its smell. Meat that has had nitrite, protoporphyrin, or any other chemical added to keep the color red should not be fed. Harmful changes that affect big cat nutrition occur long before these color changes. During the spoilage process these essential amino-acids are destroyed and fats are oxidized into harmful free-radicals. Added anti-oxidants can minimize this problem to a certain extent. That is why high levels of anti-oxidants can be a wise addition to the diets of captive Big Cats.

The calcium and vitamin D levels in red meat are too low to sustain big cats. When these ingredients are too low in their diet, metabolic bone disease and reproductive failure occur. The high phosphorus levels of red meat also play a factor in this problem. This is the cause of the bow leggedness and arthritis that are all too common in captive tigers and other big cats.

Calcium deficiencies are most obvious in young, growing animals or those that are nursing young. When great cats consume whole animals including bone they ingest calcium and phosphorus in a ratio of approximate two parts calcium to one part phosphorus. This is an ideal ration allowing for the growth and maintenance of strong bones and joints. When they eat primarily chunk meats without the bones, this ratio is reversed (1:15 to 1:30). After a period of time on a reversed Ca:P ratio young animals develop a bone and joint disease called rickets while older animals develop soft bones, bone and joint pain, arthritis and lameness (osteomalacia). To prevent these diseases, the diets of captive cats must be fortified with calcium at one-half to one percent of the dry weight of the diet.

The Importance Of Bones And Carcasses When A Commercial Prepared Carnivore Diet Is Not Being Fed:

A second, much better way to prevent calcium deficiency is to feed bones with attached meat on at least two days per week when slab meat is withheld. This can consist of horse or beef shanks, thighbones and pelvis, oxtails, ribs and vertebral bones as well as turkey or chicken necks, backs and frames.

Just as important as supplying calcium, feeding bones will keep the animal’s teeth and gums in good condition and removes tartar – a significant problem in captive large cats. In doing that, diet texture is much more important than diet content (read here)

Tartar and resulting loose teeth and dental abscesses lead to bacterimias ( septicemias , blood poisoning) which ultimately damages the animal’s heart, liver and kidneys and can lead to premature death.

In public displays, this is rarely done sufficiently because of the squeamishness of visitors and extra cost and extra work for the staff. (ref). Once a week is not sufficient if you want your big cats to remain healthy. (read here)

So there is a lot more to good husbandry and health than providing your captive big cats with balanced nutrients. Read more about that here

Vitamin A is essential to the linings of the respiratory and digestive system. A lack of vitamin A predisposes large cats to sinusitis and other respiratory and digestive tract infections as well as to blindness, conjunctivitis, incoordination and pelvic limb paralysis. Sperm quantity and quality and subsequent male fertility is reduced when insufficient vitamin A is fed. Deficient animals have poor hair coats and are listless and apathetic. In the wild great cats receive adequate amounts of vitamin A by consuming the livers of their prey. Fed whole prey in captivity they also receive adequate vitamin A. However vitamin A levels are much too low in lean meat. Because it is stored for long periods in the cat’s liver, there is a long lag time before deficiency disease occurs. To prevent these diseases, every four pounds of chunk meat should be fortified with 7,000 IU of vitamin A.

How Much To Feed:

Various field studies have estimated that mature wild tigers and lions consume between 10 and 25 pounds of prey a day. This is between 4 and 7% of their body weight. This is only a theoretical average. In the wild tigers and lions will gorge up to one hundred pounds at one sitting and then fast for many days. In captivity tigers and lions eat considerably less because of sedentary life styles that burn fewer calories. Captive adult large cats should eat between 4 and 6% of their body weight or between 9-18 pounds of chunk meat when fed five days a week. Because temperature, habitats and exercise differ at every facility, they should be fed no more than the minimum amount that keeps them in lean condition. I see much more obesity among captive cats than excessive thinness.

Several commercial sources exist for balanced big cat diets. These diets are packed in frozen sausage-like casings containing all parts of the prey animal other than the hooves and hide. Some are based on horse meat and others on beef. They are formulated to meet all the nutritional requirements of great cats and are aesthetically pleasing to zoo visitors. The daily portion can be band-sawed frozen and allowed to thaw in the cat’s enclosure. The disadvantage of these products is that they do not give the cats enough dental exercise to prevent tartar buildup and gum disease. They are also quite boring and unfair to the cats who derive pleasure dismembering carcasses. If these diets are fed, bones should be fed at least two days a week to keep the cats happy and occupied. Prepared diets also come canned but are expensive to use with large cats. A 275 pound adult non-breeding female Bengal tiger requires about 9.6 pounds of commercial frozen prepared diet five days a week while a 350 pound adult male Bengal requires about 12 pounds.

With the exceptions of calcium, and vitamins A and D, fresh red beef or horse meat is nutritionally adequate for all of the great cats. These large cats are best fed five days a week and fasted two days. With this schedule their alertness, appetite and general condition remains good. On the days that the cats are not fed, they should be given bones with meat shreds still attached. Never feed large cats cooked meat. Cooking destroys too much of the essential amino acid, taurine.

I do not like to feed fish- containing products to exotic cats. Fish sources used in animal feeds often contain rancid oils that liberate free radicals, which damage the body. If fish is fed the diet should be heavily supplement with thiamine and vitamin E. Fish can also contain excessive amounts of iodine that might lead to thyroid problems. (ref) The same goes for feeding excessive amounts of livestock tracheas (windpipes). (read here)

Freezer temperature should be maintained at zero to minus 10F (-18 – 23C) For every 5 degrees above zero the storage life of meat is cut in half. A butcher’s band saw, a suitable scale and metal boning gloves are all essential. Meats should be fed frozen or just after thawing. Every organization keeping great cats should keep a log as to how much meat each cat consumes. This amount will vary depending on the season, pregnancy, lactation and growth. Feeding as much as the cat will eat leads to obesity. Great cats eat up to twenty percent more during cold winter weather and up to twenty percent less on hot summer days. Meat that is not consumed in twenty four hours should be discarded. Feed from stainless steel dishes – aluminum dishes will discolor the teeth.

Calcium: If for some reason bones were not being consumed and a commercial mineral/vitamin supplement was not being fed I added twenty-crushed 750 mg Calcium carbonate antacid tablets to every four pounds of meat. Calcium supplementation is not essential if bones , turkey or chicken necks and frames are being fed two days per week. . The most economical source of calcium carbonate is oyster shell which is usually sold as a poultry supplement at feed stores. Triple the amount of calcium provided to growing youngsters, pregnant and nursing females.

Vitamin A: Add two crushed generic compete adult multivitamin containing among its ingredients 3,500 vitamin A, 400 IU vitamin D and 1.5mg Thiamine to every four pounds of meat. I do not supplement if liver is being fed.

Vitamin E: Puncture and drip one 400 iu vitamin E capsule on every four pounds of meat.

Vitamin D: Vitamin D levels may be low in animals fed beef or horse with most of the fat trimmed away. Carcass fat is a major source of this fat-soluble vitamin. I have seen cats survive on a chunk meat diet with no supplementation when chicken necks were fed twice a week. Apparently there is enough vitamin A and D in the chicken fat to sustain these animals. However, the use of crushed generic Centrum tablets will insure that the cats receive sufficient vitamin D.