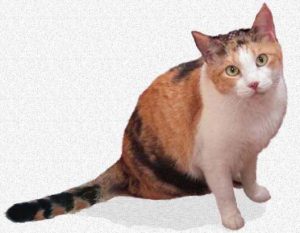 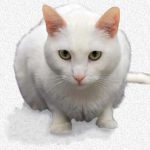 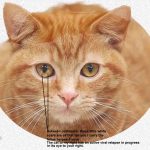 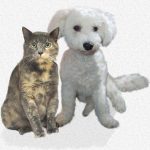 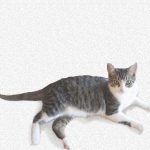 Rhinotracheitis, is caused by the feline herpes-1 virus. In the UK, it is the most common cause of Cat Flu. It is one of the most common diseases of cats in the developed World. The virus is a particular problem in stressful situations such as animal shelters. In one Colorado shelter, evidence of the virus could be found in 93.3% of the cats that were housed there. (ref)

The majority of cats that contract rhinotracheitis show mild eye and upper respiratory tract symptoms that pass within 10-20 days if the cats are otherwise healthy. But stressed cats with over-taxed immune systems malnutrition and the high virus exposure of group-living sometimes become much sicker with the disease and are more likely to become chronic carriers of the virus once the initial infection passes.

Concurrent infection with the feline leukemia virus, feline aids or multiple health issues tend to make the disease more severe and increase the length of convalescence. Physical and emotional stress also complicates the course of this disease. That is why it is such a problem in shelter cats.

Genetics may also plays a roll in determining the severity of rhinotracheitis. Long-haired and purebred cats seem genetically predisposed to a more serious infection.

Cats become infected with rhinotracheitis in several ways. The most common way is close exposure to a sneezing cat or a carrier cat showing no symptoms at all (often their mother). Cat sneezes can scatter the virus particles through the air (up to 10-12 feet).

Pets that approach and sniff infected cats can also become infected by virus particles clinging to an infected cat. Not every cat that is shedding rhinotracheitis virus appears ill, in fact most do not.

People can also spread the virus on their hands and clothing. It is also thought that infected mother cats can pass the virus on to their kittens while they are still in the womb, although most early exposure is probably during the nursing period.

Rhinotracheitis virus invades the lining of the nose, pharynx, sinuses, throat, windpipe and the membranes that surround the eyes (conjunctiva ). A few days after infection, many cats begin to sneeze. When the disease affects young cats and kittens they often loose their appetite and become depressed. It is quite common for these cats to have nasal and ocular discharges. Although signs of sickness during these first exposures is highly variable (no signs to severe signs) the virus is actually moving throughout their bodies. (ref)

Interference with the cat’s sense of smell probably accounts for the lack of appetite in many cats during their initial infection or later flare-ups. In severe infections ulcers may form in the mouth as with calicivirus.

These problems usually resolve without treatment during the two or three weeks following infection.

When pregnant cats become infected, the queens may abort their kitten or give birth to kittens in poor health. Infections in these kittens can be fatal.

A common residual effect of rhinotracheitis is persistence of the virus in the corneas of the eye. Periodically, with stress, the virus, which lays dormant in nerves of the face, will reappear forming oval corneal ulcers that are slow to heal. These appear as milky areas on an otherwise clear cornea. When these ulcers are active, blood vessels can be seen entering the area. When they are quiescent, they are in effect scars with no specific blood supply.

Another residual form of the disease is chronic rhinitis (nose inflammation) and sinusitis. In these cats, flare-ups of the virus lead to necrotic tissue within the turbinate and ethmoid bones of the nose. These areas of chronic inflammation harbor bacterial infections that are very hard to eliminate.

Even with excellent veterinary care, approximately eighty percent of the cats that contract the disease harbor the virus in their system for the rest of their lives. This is called a latent infection. When stressed, latently infected cats (harboring the virus but showing no signs) sometimes shed the virus again. Some stressors are moving, boarding, pregnancy, lactation, vaccination, injury, surgery or a new cats in the household.

Overcrowding, poor nutrition, poor sanitation, and lack of vaccination also make the disease more likely. Some pets continue to have low grade, persistent infections with respiratory symptoms, eye drainage and conjunctivitis. These cats are also quite efficient in passing the infection on to other pets

How Does Your Veterinarian Diagnose A Herpes-1 Virus Infection?

Although we can be highly suspicious that we are dealing with a case of rhinotracheitis, it is not possible to diagnose the disease with certainty from symptoms alone. This is because the symptoms of infection with calicivirus or certain respiratory mycoplasma are too similar. Typically calicivirus does not affect the eyes and mycoplasma affects primarily the eyes. And typically, calicivirus and mycoplasma do not cause depression, malaise and fever.

Although it is possible to send cotton swabs of nasal secretions and eye drainage to certain laboratories for Herpes-1 virus isolation – but this is not commonly done.

What Medications And Treatments Will Help?

Good nursing care in a low stress environment is the most important therapy for rhinotracheitis. Antibiotics help prevent secondary bacterial pneumonia and rhinitis and nose drops facilitate breathing. Cats with rhinitis and sinusitis are often reluctant to eat. So pungent tasting foods may help tempt cats that are otherwise reluctant to eat.

Some veterinarians place symptomatic cats on antibiotics such as trimethoprim/sulfa or cephalexin oral suspensions. Although antibiotics have no effect on the virus, they may lessen secondary bacterial infections that might make matters worse. Giving mild nose drops and inhaled steam treatments often make the cats feel better and make it easier for them to breath.

In severe infections delivering a mist of antibiotics (nebulization) like gentamycin or amikacin may be helpful. Some veterinarians also give cat that are not eating injections of B-complex vitamins as appetite stimulants.

Some veterinarians have found that the amino acid, l-lysine appears to help some cases of rhinotracheitis resolve. This amino acid reduces the amount of another amino acid, arginine, that is present in the cat’s body. Arginine is thought to be necessary for herpesvirus to reproduce. Most prescribe this supplement until the acute flare-up has resolved, but some cat owners continue the supplement indefinitely. Lysine can be purchased at health food stores. Pick a brand that is propylene glycol-free.

Are There Ways To Keep My Cat From Catching This Virus?

Because natural immunity to rhinotracheitis is incomplete, relapses are common. The virus is so prevalent among cats that many are exposed to the virus before their first vaccination against it. Vaccines given after a pet already has a virus are of no benefit. So do everything you can to keep kittens isolated from other cats until they can be protected by a vaccination that includes the herpes-1 virus. Avoiding keeping large numbers of cats in the same area. If you have multiple cats, separate new kittens and cats until they have received a vaccination.

Within the last few years,veterinarians have been given a tremendous tool for sorting out the various organisms that can cause chronic respiratory, nasal or eye problem in cats.(ref) Sophisticated central laboratory services are now available throughout the United States to do this. All utilize a very sensitive test, the Polymerase Chain Reaction or PCR test to look for six of the most common causes of upper respiratory, nasal and/or chronic eye problems in cats (Bordetella, Chlamydia, calicivirus, Herpes 1,influenza and mycoplasma). If your kitty has a persistent eye problem, some of these organisms are not the likely cause; but the panel tests for all of them. Its limitation is that the most common cause, the Herpes-1 (rhinotracheitis virus) is so stealthy that it can avoid detection with the PCR test when the cat is not experiencing a virus flare-up. So if the PCR test is positive for herpes-1, your cat is definitely a carrier of the virus. But if it is negative, the virus might still be sleeping somewhere deep in the cat’s nerve cells. So if the test found no likely cause of your cat’s reoccurring symptoms, it should be repeated at a later date – preferably during a flare-up.

Two of the laboratories offering this panel are Idexx Laboratories and Zoologix Laboratories. You can read their test descriptions through the company name links I provided.

Are There Medications That Might Increase The Chances Of A Relapse?

Yes. Medications that weaken your cat’s immune system have been implicated in herpes-1 relapses. Two examples are cyclosporin and corticosteroids (such as prednisone and methylprednisolone). (ref)