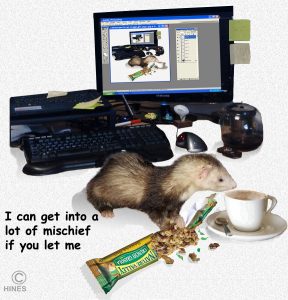 The distemper that ferrets occasionally contract is actually a disease of dogs. That particular dog distemper virus is in the morbillivirus group – the same group that includes human measles virus. We know quite a lot about what distemper does to ferrets because scientists use ferrets and the canine distemper virus to develop new ideas on how we might prevent and treat measles in humans.  The form of distemper that cats get, feline distemper/panleukopenia, does not infect ferrets.

Distemper is particularly nasty when it infects ferrets. Although 50-70% of infected dogs survive the disease; canine distemper kills virtually every ferret it infects. When an exceptional ferret does survive, most veterinarians believe it was because it had partial immunity from its first or second shot of an uncompleted pediatric distemper vaccination series. Others believe survivors were fortunate enough to be infected by a very weak strain of the distemper virus. You can read some of the key scientific articles that discuss ferret distemper here: (ref1, ref2, ref3, ref4, ref5)

How Might My Ferret Be Exposed To Canine Distemper?

The distemper virus is shed through sneezes and coughs (aerosols). It is also present in the urine and feces of infected animals. The time between the first exposure to the virus and signs of illness is generally 7-10 days.

Just as it is when you come down with the flu when none of your friends or family members has it, it can be difficult to know for sure how the virus arrived. Distemper does not persist in the environment. Two hours is about the maximum time that morbilliviruses can live outside the body because sunlight quickly deactivates them. Distemper virus is not carried by the wind or persistent on food bowls, etc.

Ferret visits to pet stores, grooming salons, ferret shows and boarding kennels are the usual suspects. Urban raccoons and skunks are also susceptible to canine distemper and have the potential to spread it to ferrets. Association with unvaccinated dogs is another possible mode of transmission. Fleas apparently also have the ability to spread canine distemper. (ref)

However the chances that your unvaccinated household ferret – that never leaves your home and is never introduced to pets with unknown distemper immunity – will contract distemper is very low. Those odds might go up if you or family members work at an animal shelter, pet shop, or take in new ferrets – particularly if their source is questionable and their vaccination history murky. (ref)

Why Is An Encounter With Distemper Virus So Dangerous To My Ferret?

The job of your ferret’s immune system’s lymphatic cells is to fight bacterial and viral infections. But those same lymphatic cells are the very first targets of the distemper virus. Distemper virus homes in on a particular surface compound those cells possess. (ref) With those lymphocytes disabled, the pet becomes severely immunosuppressed and vulnerable to secondary bacterial infections. Soon after disabling those cells, the virus attacks the uppermost layers (epithelium) of the lungs, the rest of the respiratory tract and often the digestive system as well. That can begin as early as 2 days after infection. (ref1, rptef2, ref3) although experimentally, incubation takes considerably longer (7 to even 56 days). (ref)

If the ferret lives long enough, this early scenario is often followed by neurological complications such as paralysis and seizures. Ferrets generally succumb to distemper within two weeks, although a few linger on longer. (ref)

What Signs Might I See If My Ferret Catches Distemper?

When ferrets contract distemper, the first signs owners usually notice is a loss of appetite, lethargy and depression. Of course, a lot of other health issues other than distemper could be the cause of that. And because those other health issues are more commonly seen than distemper, it is quite possible that those earliest signs might be misinterpreted – even by me or your veterinarian.

But within a few days, nasal discharge and crusty eyes usually bring the diagnosis into focus. Ferret’s can also catch human influenza. Influenza is the only disease I know of that produces similar respiratory signs in ferrets.

If you take your ferret’s relaxed rectal temperature at home after exposure to the distemper virus, it might be over 102.5 F/39.2C. Your ferret’s body temperatures taken at home tend to be more accurate because healthy ferrets often run a bit hotter at animal hospitals and after moderate to heavy activity.

It is also common for ferrets with distemper to develop skin rashes. Those areas are sometimes itchy as well. (ref)

As I mentioned earlier, if the disease progresses long enough to affect the pet’s nervous system, twitching, seizures, excessive salivation and paralysis often occur. As in dogs with distemper, those neurological symptoms can be easily mistaken for rabies.

Because distemper disables your ferret’s immune system, diarrhea and pneumonia due to secondary bacterial infections are common as well.

These are just the most common ways distemper progresses in ferrets. Not ever ferret with distemper shows all these symptoms, nor will the signs always progress in the same order or at the same speed. Sometimes distemper presents itself in bizarre ways. You can read about some of those strange cases here and here.

How Will My Veterinarian Confirm That The Distemper Virus Is My Ferret’s Problem?

When you bring a ferret that is suffering from neurological, gastrointestinal and/or respiratory illness to a ferret-savvy veterinarian, infection with the canine distemper virus is probably somewhere on the vet’s diagnosis list. A full 3-shot juvenile series of distemper vaccinations, given at the proper time and interval, makes a distemper diagnosis considerably less likely – but they do not entirely rule it out.

A history of recent exposure to another sick ferret or dog, a ferret rescue shelter, a pet shop or a breeding facility also increases distemper suspicions.

Fever also reinforces distemper suspicions, as does the presence of a skin rash.

A blood analysis showing an abnormally low white blood cell count (ref) also point toward distemper. So does a concurrent anemia. Both are signs of bone marrow suppression – one of the universal effects of distemper that I mentioned.

But the most definitive tests that your veterinarian has to seal a distemper diagnosis are: (1) Confirmation of the distemper virus’s presence in swabs taken from the ferret’s eyes. (2) A positive distemper conjunctival viral immunofluorescence test. (3) A positive PCR test for the presence of distemper virus. (4) Tissue sent off to a pathologist that confirm the presence of typical virus inclusions (eosinophilic intracytoplasmic and intranuclear inclusion bodies) in tissue samples taken from the ferret’s lungs and/or bladder (postmortem samples from a ferret that did not survive).

Do Veterinarians Have Effective Treatments Once My Ferret Has Caught Distemper?

Unfortunately we do not.

A 2007 study, searching for effective treatments for measles, claimed that vitamin A supplementation was very beneficial to ferrets that had been intentionally given canine distemper and that all that were given vitamin A recovered. (ref)  I have not had the opportunity to attempt to duplicate that in pet ferrets. If you have, let me know. Excessive vitamin A can be liver-toxic.

It is known that certain strains of the distemper virus are considerably more virulent (powerful) than others. (ref)

In 2019, most veterinarians treat distemper-confirmed or distemper-suspected ferrets with general supportive care. That includes fluid therapy to counteract dehydration, tube-feeding when the pet is no longer interested or capable of eating, and appropriate ointments and shampoos to deal with the eye infections and skin problems that are often associated with distemper. Antibiotics are included to combat secondary bacterial infections.

At one time, injections of anti-canine distemper antibodies (serum) were suggested for ferrets with canine distemper. A case in the literature reported that the single ferret that received it was the only one in a group of 13 that survived. (rptref) That has fallen out of favor due to its lack of effectiveness in saving distemper-infected dogs. It is still available (@$386.00/milligram) but I do not know of any veterinarians using it. Let me know if you do. I suppose that blood serum antibodies from a ferret that lives long-term in an animal shelter environment might perform equally as well. But I am uncertain about incompatibilities between ferrets. I know one publication of the 1990s did not find detectable blood groups in domestic ferrets. (ref)

In 2014, a group of researchers, again searching for a drug that would kill the measles virus, identified a compound that showed positive results when given to ferrets with distemper. To date, I believe it has only been given to laboratory ferrets experimentally. (ref1, ref2)

Despite your veterinarian’s best efforts, ferrets with distemper usually pass away 12-14 days after their symptoms began. A few appear to be on the road to recovery – only to develop severe nervous system decline several weeks or even months later.

What Can I Do To Prevent My Ferret From Catching Distemper?

Although there are currently no established effective treatments for ferrets that contract distemper, ferret-labeled distemper vaccines on the market are very effective in preventing the disease. The immunity these vaccinations impart to ferrets, is probably much longer than a single year. (ref1,ref2) So I believe that yearly distemper vaccination boosters are unnecessary and counterproductive – despite what the vaccine manufacturers say.

I vaccinated my own ferrets every three or four years – the initial 1+2 shot series and a single booster four years later. Because many of my ferrets lived at my animal hospitals, I assumed that their distemper exposure risk was high. If they or my client’s ferrets show even the slightest post-vaccination reactions, I never vaccinate them again.  If your ferret will be exposed to young, unvaccinated dogs or ferrets or under chronic stress (immunosuppressed), or makes the rounds of ferret shows etc., vaccination more frequently might be a consideration. But in my opinion, over-vaccination is likely to cause considerably more health problems than it solves. You can read more of my thought about that here.

Most veterinarians in the United States prefer Merial’s Purevax®  ferret distemper vaccine (acquired in 2017 by Boehringer Ingelheim). A recurring problem with that vaccine has been periodic lack of availability. The Purevax product is composed of a canarypox virus thought to be harmless to mammals, which has been bioengineered to display surface portions of the dog distemper virus. Ferret breeders generally give their first shot when the kits are 6-8 weeks old. The last two are usually given by your veterinarian at 12 and 16 weeks of age (some 14wk+).

During the periods when Purevax®  was not available there was turmoil. Many veterinarians in the US switched to immunizing ferrets against distemper with Merck’s Nobivac® Puppy-DPv, not a USDA-approved use in the USA but a vaccine that had been used successfully in ferrets in Europe and the UK for many years. I know there was a point several years back when the European Union decided to restrict access to Purevax® even when it was available because it was a GMO product. Political correctness sometimes trumps common sense. In their desperation, that led several zoo veterinarian friends to rely on a custom made product developed in the Netherlands to vaccinate African exotics (including mustella and wild dogs) against distemper. Although it seemed to perform well in the lab it was a complete failure in the field. (ref) In South Africa, the vet school was desperate enough to have Design Biologics in Pretoria prepare another inactivated distemper vaccine. I do not know how that performed. If what and when zoo animals get their vaccinations interests you, go here.

An older vaccine developed for the mink and fox industry, Fervac-D, gave my clients’ ferrets so many severe post-injection reactions that I discontinued using it years before it was finally pulled from the market. (ref)