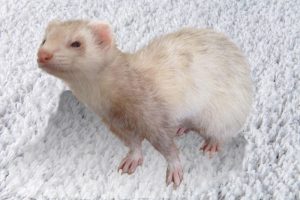 What Causes The Anemia And What Can Be Done

Read in more detail about the anemia that unneutered and nonbred female ferrets suffer in my article on spaying and neutering ferrets here.

Why Would My Ferret Be Anemic?

Anemia is a rather common problem in ferrets. There are a number of conditions that cause it.

If your are very fortunate, the problem is fleas. Dog and cat fleas are quite happy to feast on ferrets. The ferrets habits of burrowing into clothing and stuffed furniture give fleas unlimited opportunity once they are present in your home. If you see fleas on your cats and dogs, your ferret has them as well. Read about fleas on dogs and cats and ferrets here . It does not take long for fleas to suck a good portion of the blood out of your ferret – leaving it anemic. Any product that can safely be applied to kittens can be applied to your ferret to solve this problem. Also, run all bedding through a hot cycle in the washer and dryer to eliminate fleas. The most effective products are Advantage and Frontline.

Ferrets that are eating a quality ferret diet should not develop anemia. But if they are being fed dog food or some brands of cat food, they may not be getting the nutrients they need to produce blood. You will find some good sources of ferret food in another  article that you can read here.

Ferrets that are kept in galvanized wire cages or cages with galvanized floor trays may ingest too much zinc. The first sign of this is usually anemia. It can also occurs in ferrets that have eaten small items that contain zinc – although these pets usually show more rapid signs of intestinal obstruction.

Ferrets can also become anemic due to a number of specific diseases.

One of the common signs of adrenal gland tumors in ferrets is anemia. This is due to over-production of estrogens which prevent the pet’s bone marrow from producing red blood cells.

Un spayed female ferrets also develop anemia if they are not bred. This is a form of aplastic anemia caused by too much circulating estrogen. It is no longer common because most female ferrets are spayed by the breeders before they are sold. When it was common, the pets needed transfusions and hormone therapy. By the time I saw most of them, they were so anemic (less than 20% PCV) that they rarely survived. Injections of human chorionic gonadatrophin occasionally works to ovulate these ferrets and cure them until their next heat cycle. But by the time they are anemic, they are usually too weak to breed. Read extensively about that problem in intact, non-breeding female ferrets here.

Lymphatic Tumors are very common in ferrets of all ages. One of the signs of this problem is anemia. Enlarged lymph nodes and an elevated blood lymphocyte count sometimes accompany this disease as do an enlarged spleen and weight loss. But both have other causes that are unrelated to cancer. These tumors do not respond well to chemotherapy or radiation.

Stressful situations that cause repeated bloody diarrhea or stools will eventually cause anemia. The stool is described as “black and tarry”. Some of these cases are due to feeding raw chicken and meat, containing bacteria such as  Campylobacter  or Salmonella. Infection with Helicobacter mustelae is also thought to occasionally cause anemia in ferrets. Others are due to excessive heat and in some cases we do not know the cause.

When a pet’s kidneys fail, they loose the ability to produce erythropoetin which is necessary for blood formation. In kidney (renal) failure, poisons also build up in the pet’s blood that prevent new blood cells from being formed (another form of aplastic anemia). Blood tests can quickly spot this problem.

There is little known about these conditions in ferrets. However, an article was published in 2010 on a probable case of pure red cell anemia in a ferret that was apparently cured through a specific treatment plan. You can read that article here. Perhaps some of the perplexing cases anemia that veterinarians see in ferrets, can have successful outcomes.

Aleutian disease is cause by a type of parvovirus that attacks members of the weasel family, including mink and ferrets. One of the many signs of Aleutian Disease when it attacks ferrets can be anemia. Basically, in this condition, the ferrets just go “down hill” with no specific signs. There is a blood test (CIEP-test) to diagnose it. This disease is not common in ferrets in the United States.

How Can I Tell If My Ferret Is Anemic?

Anemic ferrets must breath faster to keep their bodies oxygenated. A normal ferret takes about 20 – 36 breaths per minute.

Anemic ferrets have low energy levels. They sleep more than normal and don’t have the curiosity they once had. They don’t groom themselves as well and they often loose weight due to a poor appetite.

The gums of anemic ferrets are very pale. You will see that the gums or mucous membranes are pale when you lift your ferret’s lip . Its eyes and ears may be pale as well. These areas may also be yellowish in color.

Anemic ferrets usually have heart murmurs that are audible with a stethoscope.

Anemic ferrets may bleed longer than normal ferrets. That is , there blood may take longer to clot.

How noticeable these signs are in your ferret depend on how anemic it is and how quickly the anemia occurred. With gradual blood loss anemia, the body has the time to adjust to the decreased red blood cell numbers. Ferrets that become anemic very quickly may die because their bodies just can’t handle the sudden loss in red blood cells and oxygen.

How Will Your Veterinarian Diagnose Anemia In Your Ferret?

The simple tests (PCV, Hct) can be run while you wait. Anemias are divided into two types. In the first, blood is being lost somewhere, (regenerative anemia). In the second, aplastic anemia, the pet’s bone marrow is not making any red blood cells. We decide which is occurring based on the results of blood tests sent to a lab. If it is determined that your pet has aplastic anemia, a bone marrow biopsy might be run.

What Options Do We Have If Your Ferret Is Anemic?

If the anemia is mild or moderate, an oral supplement of vitamins and iron may help (hematinics). This works best in blood loss anemias where the ferret is still capable of producing new red blood cells.

The only treatment for severe anemia (PCV under 20%) is a blood transfusion from another ferret. Many years ago, I was able to treat these ferrets with artificial blood substitute (Flusol DA20®) but it was not a long term solution.

Transfusion to a ferret is difficult because of their small size. First, a large male ferret needs to be located. The only collection points are the jugular veins of the neck or the large vein just in front of the heart (cranial vena cava) – so the donor ferret must be anesthetized. Luckily, there don’t seem to be big differences in ferret blood groups so the blood is generally not cross-matched. If your ferret is anemic because of a condition that is correctable – this is a life-saving option.