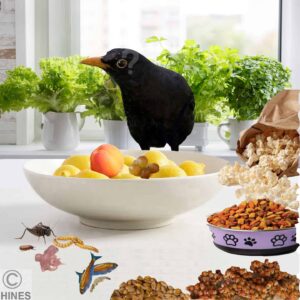 How Good Are Birds At Detecting Sweet?

Birds that rely on fruit and berries as all or part of their diet are very good at detecting sweet taste, Raptors, owls and other birds that rely chiefly on insects, prey, meat or fish probably less so.

But as far as biologists know, birds once lost their T1R2 sweet receptors soon after they evolved from dinosaurs. ( read here ) But since then many bird species appear to have regained the ability to taste sweet using modified genetic pathways of two other taste receptors (T1R1 & T1R3). The birds that have been most successful at detecting sweet are the ones whose feeding habits include berries and fruit (= frugivorous and omnivorous birds).

What we call songbirds ( passerine birds ) make up almost half of all the birds that live today. Few have been tested to see what tastes they perceive. But among them, European starlings are known to prefer sugar solutions over water, as do hummingbirds and orioles. One study found that flycatchers (and probably many other insect and meat or fish-eating birds) apparently do not recognize sweet.

In contrast to mammals, most of a birds taste buds are located on the inner surfaces of the bird’s mouth rather than just on its tongue. The largest number is on the “roof” of the bird’s upper mouth (its palate). ( read a study in chicks here ) Although they detect tastes very well, the total number of these taste sensors appear to be considerably fewer in birds than in mammals. Lesser numbers does not necessarily mean lesser ability.

Can Birds Detect Umami? – The Taste Of Savory Glutamates In Meat & Fish

The amino acids that comprise proteins are identified by their umami taste. Starlings are known to prefer a water solution flavored with the amino acid alanine over unflavored water. However we do not know if they perceive the flavor as umami (humans perceive alanine as sweet, not umami). We know that chickens possess the T1R1 gene that identifies umami but no one has ever looked for the presence of that gene in wild birds or other wildlife. One might guess that wildlife that feed all or in part on meat, fish and insects might possess that ability, but none have been tested.

How Good Are Birds At Detecting A Salty Taste?

Birds taste the amount of salt in what they eat or drink. For your comparison, seawater contains about 3% salt. Campbell’ chicken noodle soup contains about 0.7% salt. We know that parrots prefer to drink water that contains less than 0.35% salt. Pine siskins draw their line at 0.37% salt. European starling are said to actually prefer a 0.1% salt solution over distilled water.

Can Birds Detect The Taste Of Sour?

Sour taste often relates to a food’s acidity. An acidy taste (low pH) often occurs in foods that have spoiled due to bacterial contamination. When citric acid is added to their water bowl to simulate a sour taste, red-wing blackbirds and starlings reject it. Another study found that cockatiels would not drink water with added citric acid when the pH of the water became lower than 5.5. That is a defense mechanism common to all living things. Ingesting too much acid can dangerously change whole-body pH – a foundational component of survival.

Can Birds Detect When Something They Eat Tastes Bitter?

Detecting bitterness is important to all animals in order to avoid eating toxic substances. Many of the biological toxins that plants and small prey produce are bitter – and most are produced specifically to discourage wildlife from eating them. Quite a few  insects produce tannins and other bitter phenols – also to discourage would be predators. Certain plants, nuts and fruit are also high in tannins for the same reason. ( read here ) Tannins are what make apple peels bitter. Tannins are what make fresh green olives bitter. Eggplant uses another bittering strategy, saponins. The short cool growing season and the dryness of South Texas make it a challenge for me to grow edible eggplant. They have been so bitter that none of my resident birds will touch them.

Over-consumption of tannic acid has been studied in chickens, pigs and cattle – but not in wildlife. The studies were done because certain strains of milo ( sorghum ), a very common ingredient in poultry and other animal feeds, occasionally contains toxic levels of tannic acid. When eaten in excess (over 4% tannins), young chickens grow more slowly. When tannins represented 5% of their diet, seventy percent of the chickens died during their 2 weeks of consumption. Liver destruction was the common finding. ( read here )

I mentioned that high tannin content and its bitterness is a common strategy that plants use to guard against being eaten by wildlife. All grazing animals note the bitter taste of high-tannin forage and refuse to eat it whenever they can. However during periods of drought or over-grazing they are often forced to eat these plants in order to survive. In doing so, they do they often suffer liver damage and the young experience depressed growth. Young leaves and buds of these toxic plants contain the most tannin. The amount of tannin present is unpredictable. One area can have toxic tannin levels while a nearby area is safe. Temperature also effects plant tannin level and distribution with some studies showing it highest during cool evenings. Species also differ in their susceptibility to tannin poisoning – the most resistant being pigs. High tannin levels in food also interfere with protein absorption. Green acorns and oak leaf buds are known to contain high levels of tannins and a related compound called pyrogallol. That has, on occasion, been found to be toxic to pigeons, and grazing wildlife (eg moose). ( read here ) A common finding in these animals is an elevated ALT liver enzyme level. Since sorghum is often bitter and high in tannins, you might wonder why it is planted to attract quail, turkeys, pheasant, ducks and doves during hunting season. That is a strain called WGF sorghum. Although it was developed to be too bitter for sparrows, blackbirds and starlings during its milk and dough stage, the tannin level in the WGF strain of sorghum drops about the time hunting season begins.

What Odors Can Birds Smell?

At least as many as us humans.

Although  John Audubon didn’t believe that birds perceived odors, the sense of smell of many birds it is much more sensitive than ours – even though they don’t have noses or sniff like a dog. Scientists can estimate a bird’s sensitivity to airborne odors by measuring the size of their olfactory bulbs in relation to their body. ( read here ) The champion land bird in sniffing out food appears to be the turkey vulture. Vultures can detect the faint odor of the sulfides that are released from decaying meat after only one day. They can detect that odor from over a mile away while soaring (even the odor of a dead rat, completely covered with leaves). When it comes to sea and shore birds, petrels  have phenomenal sniffing abilities. They use their “nose” to find food and navigate over the great featureless oceans. In deep ocean birds, fishy odors, especially ocean sulfides  released from sea algae and other  phytoplankton  (the favorite food of the krill and small fish they eat) help these birds locate potential hot spots for feeding. ( read here &  here )  One of those birds, the albatross can track an odor from 12 miles away, zigzagging upwind to keep track of the odor plume emanating from fish and krill. The most sensitive sniffer I know of was a black-footed albatross that was said to have traveled 64 miles from China Point on San Clemente Island tracking the odor (or perhaps taste) of a galley cook’s bacon drippings. The smell of roast beef drippings did not interest them.  (ask me for Miller1942)

In mammals, the wildlife with the longest noses tend to have the most odor-detecting abilities. Songbirds have sensitive sniffing ability too. ( read here ) There is really no reason for fruit to have pleasant odors other than to entice birds and other wildlife to eat them and in doing so scatter their seeds. Odor detecting ability varies among bird species depending on the foods they eat in nature. ( read here ) Even the lowly street pigeon has a pretty good sniffer. ( read here  & here ) When 108 different bird species were examined it was found that sea birds had the largest olfactory bulbs of all the birds (37% of their brain weight), while songbirds as little as 3%. Of the non-sea birds, two nocturnal birds, kakapos and kiwis , topped the list in their odor-sensing related genes, 600+) canaries and blue tits were found to have about a third as many smell related genes. Us humans have about 400.

All Well And Good. But What Does This Have To Do With Me And Wildlife Rehabilitation?

Well, if you paint your cages or build them out of chemically treated lumber, if you use disinfectants, if you think that slats on your raptor cages isolate the occupants from the odors of an urban environment, if you think that a bird will be fooled by a bird suit costume, you might need to think again. Raising young wildlife outside of the visual, sound, odor, tastes and threats that Nature designed them to seek out or avoid is the greatest unsolved problem we face in wildlife rehabilitation. I know of no solution to that, but I thought you might want to know.