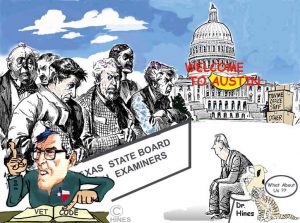 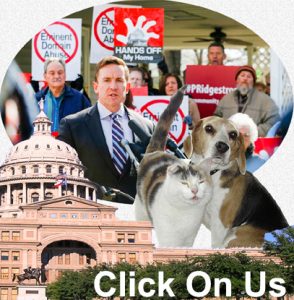 The Long Arm Of The Texas Board Of Veterinary Medicine

Because he is licensed and resides in Texas, Dr. Hines is still prohibited from commenting on your pet health concerns. However Oregon is considering becoming the first US state to make veterinary telemedicine legal worldwide for all veterinarians licensed in Oregon.  That is already the case in Ontario, Canada. 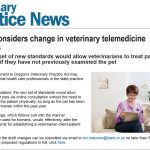 Another AVMA/Texas Board of Veterinary Examiners shenanigan here: 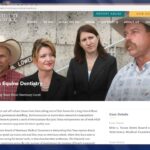 For over 17 years , pet owners, concerned about their pet’s failing health had emailed Dr. Hines for advice and support. Some paid him, most did not. But he answered every email and attempted to give each of them wise counsel and a sympathetic ear during their difficult times. Many became his lifelong friends. For now, he can no longer do that.

Dr. Hines is a Texas-licensed veterinarian in good standing and an “Honor Roll ” member of the American Veterinary Medical Association. Providing you with a source of honest and understandable information over the Internet on treatment options for your sick pet became his life’s work.

However his online articles and availability earned him the hostility of some short-sighted veterinarians. Those veterinarians, assisted enthusiastically by the AVMA,  attempted to disable his website through the use of the Texas State Board Of Veterinary Medical Examiners. The Texas Board of Veterinary Medical Examiners is not suggesting that any of the healthcare information Dr. Hines provided to you was wrong or inaccurate. They are stating that the simple fact that he corresponds with you over the Internet on pet health issues is a violation of Texas law and ultimately cause to revoke his license should he resume it.

But Why Is The Texas Board Of Veterinary Medical Examiners Doing This?

The electronic age and corporate culture have changed many norms in American society. Through the 1970s, traditional small animal veterinarians were sole proprietors who enjoyed comfortable incomes, high prestige and high job satisfaction. But slowly over the years since then, mega corporations like Banfield,  Blue Pearl, VCA and Mars assumed control of many solo and small-group veterinary hospitals. Internet and telephone pharmacies like 1-800-Petmeds eroded animal hospital sales of pharmaceuticals and new vaccination guidelines reduced office visits and sales. These changes all reduced your veterinarian’s income and made him or her feel less secure. This all occurring despite the number of pets in the USA increasing over the same period. An in-depth study by Bayer identified three causes for this decline: the poor economy of the times, fragmentation of the marketplace and the availability of online/Internet information to pet owners. It is unfortunate but quite true that many veterinarians find this powerful flow of information (“Dr. Google”) threatening.  Veterinarians faced the same panic over 100 years ago when draft horses (work horses), their main source of income, were being replaced by mechanical tractors. (see here)

Why Did The Board Single Out Dr. Hines?

Companies like JustAnswer located in San Francisco, answer veterinary questions online just as Dr. Hines did. But JustAnswer puts their attorneys, a protective corporate buffer and anonymity between their veterinarians providing the answers, the pet owner and the various State Boards. Dr. Hines does not, he works alone from his home. The Texas Board of Veterinary Medical Examiners is particularly aggressive and often tone deaf to the needs of pets and pet owners. They saw Dr. Hines as easy prey. JustAnswer, being based in California with abundant resources, was out of their grasp and a more difficult target. Dr. Hines’s gross revenues from his website activities were less than $2,500 per year. JustAnswer has a current estimated gross revenue in excess of $48,000,000 a year. They claim to answer a veterinary question every 9 seconds. It may have been just too tempting for the Board and the AVMA to vent their frustration at sliding veterinary incomes, stress and morale against an easy target like Dr. Hines whom both assumed (correctly) did not have the financial resources to fight back. Unfortunately for them, they did not realize that the IJ was looking over their shoulder.

The History And Power of Veterinary Boards

Guilds and trade unions have existed since antiquity. America was rather late to the game. It was not until the late 1700s that Richard Peters, a Philadelphia veterinarian, proposed that veterinarians band together for the communal common interest. Every state and entity in America (57) now has a veterinary board. Their policies follow the guidelines of the American Association of Veterinary State Boards and the AVMA’s ” model” practice act. These boards are powers unto themselves, stifling dissent and turning a blind eye to obvious quackery. They masquerade as serving the public interest. There is great variation between states as to how their rules are interpreted and enforced; but like any effective union, it is their members welfare, not animal welfare, that governs all policy decisions.

According to former AVMA  president, Douglas Aspros, the American Veterinary Medical Association fully supported the action of the Texas Veterinary Board in muzzling  Dr. Hines. The AVMA’s house of delegates passed a resolution opposing any form of “remote consulting” (via the internet,phone, letter, etc.) between an American veterinarian and a pet owner anywhere in the World. But the AVMA also conveniently agreed that form of telemedicine was OK – provided you first payed a local veterinary middleman for the privilege of receiving a telemedicine consultation. That local veterinarian is to act (for a fee) as your chaperone. The only delegates to not to go along with this charade were those from Hawaii and Alaska. They were outvoted. Several years later, an emissary of the AVMA contacted Dr. Hines to ask what it would take to have him drop the IJ lawsuit – perhaps a prestigious committee assignment? A donation to his website was also mentioned.

Ms. Oria, the former director of the Texas State Board Of Veterinary Medical Examiners and former director of the Texas State Board Of Plumbing Examiners initiated the charges against Dr. Hines. At first she alleged that a “complaint had been filed” but when later pressed in court, the Board retracted that. She and most of the Board were encouraged to resign in 2016. (see here) But the ban on Dr. H. remains in effect. When Ms. Oria responded to a pet owner who asked why she could not communicate with Dr. H. , her answer was short [he is]  “banned from offering an online opinion on anything that has to do with animals”. So to this day, according to the TBVME, you can ask your hairdresser all you want to about your dog or cat’s health – but you can’t ask Dr. Hines.