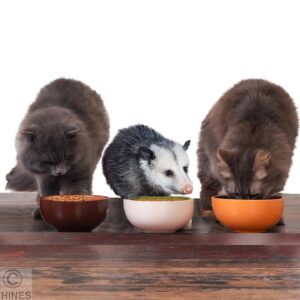 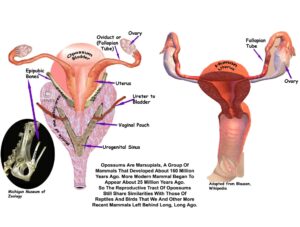 Female American opossums are likely to live longer if they are spayed before their reproductive tract matures.. That can be as early as five months of age. Male opossums can be neutered. Some believe that neutered males are more likely to remain friendly (docile). Others believe that the male opossum’s tendency to prostate disease decreases when neutered. Although that occurs across the animal kingdom, nether of those effects have actually been verified.

Fortunate opossums in captivity live to be four years old – although there are a few unconfirmed reports of them living considerably longer. Their lifespan in the wild is about half as long (~2 yrs because they are accident prone). The most commonly presented captive marsupials are sugar gliders. All have anatomical differences one to the other but female Virginia opossums have two pelvic marsupial bones that help support their pouch. Within the pouch are thirteen mammary gland nipples/teats. Opossum fetuses are expelled very early in the mother’s pregnancy. At the proper time, the fetuses leave the mothers double uterus, crawl out her cloacal opening and up into her pouch where they firmly attach themselves to one of the teats.

Virginia opossums are sexually mature at 6-8 months. Their breeding season is from late winter through the entire summer. Their fertilized eggs remain in the womb for 12.5–13 days before they move to the mother’s pouch. There can be up to 21 of them. But since there are only 13 teats, the excess will not survive. They normally remain in that pouch for about 70 days. When they leave they weigh about 130 grams. The number of litters per year is said to be 1-3. The babies generally crawl out of the pouch when they are about three month old, then cling to her fur for another month before venturing out on their own.

Opossums kept in captivity that are not neutered commonly develop uterine infections (endometritis ) , mammary gland (breast) inflammation that can lead to mastitis or cancer as well as uterine prolapse . An infected pouch will have an odor. The color of its interior will often darken from its normal pink to brown and there is generally a thick smelly discharge. Various bacteria including pseudomonas and yeasts have been cultured from infected pouches. There is also a poorly understood hormonal malfunction associated with non-neutered adult opossums termed cushingoid syndrome. The signs, such as hair loss are similar to what veterinarians see in Cushing’s Disease, but what the underlying cause is in opossums is unknown. What we do know is when you disturb an animal’s normal reproductive cycles, the amount and effects of a wide variety of hormones within its body change. The same thing occurs in ferrets and otters. In their case, persistent high estrogen levels cause life-threatening anemia. Read about that here.

Un-neutered male opossums are subject to prostatitis. The most common sign of that is blood in his urine, decreased appetite and loss of body weight. Sometimes a course of antibiotics helps temporarily, sometimes it does not. Some report that an injection of GnRH agonist such as Lupron® solves these problems in male and female opossums. When effective, it must be repeated every 4-6 months, The other option is castration and managing the weight gain that castration often encourages. For detailed information on the techniques veterinarians generally use to spay and neuter opossums  ask me for Johnson-Delaney2017.pdf – you can pass it on to your veterinarian.

If you are going to keep an opossum as a pet, don’t fill its food dish anywhere nearly as full as in my drawing at the top of this page and realize that it is going to eat wherever it encounters food. I suggest that you look for the lowest fat name-brand cat food that you can find. Perhaps one designed for indoor cats; and that you supplement small portions of that with low calorie vegetables. That is because pet opossums (and raccoons) tend to quickly become obese. That leads to a great many health issues down the line. Small omnivorous animals kept as pets spend close to no time scavenging for food so they burn few calories. When it comes to opossums their metabolism is approximately one-third that of a raccoon.